The artist's previous fashion tie-ins have been wildly successful. 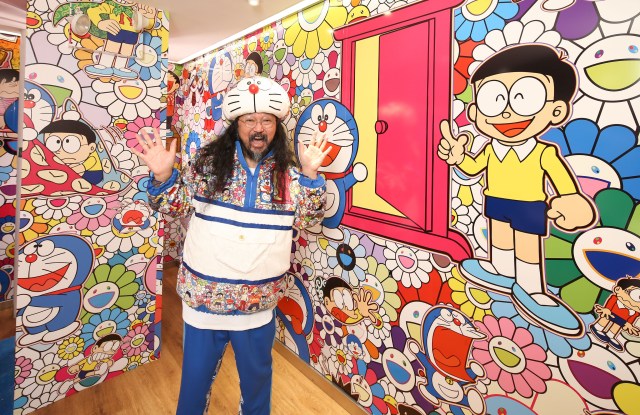 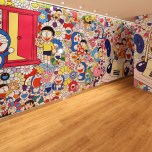 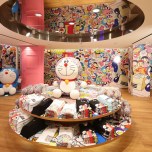 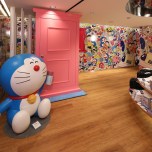 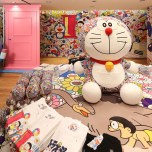 NEW YORK — Takashi Murakami has proven his affinity for decorating merch. There was his wildly successful collaboration with former Louis Vuitton creative director Marc Jacobs where the artist covered handbags with cherries and other signature graphics. He also turned his paintbox on limited-edition Vans, Visvim Kiefer Hi-Suede sneakers and Supreme skate decks.

Murakami on Thursday turned up at Uniqlo’s Fifth Avenue flagship on the corner of 53rd Street to promote his latest tie-in, a UT collection of T-shirts featuring his art for Doraemon, a Japanese manga series that first introduced in 1969. Murakami’s artwork, “Anna koto iina dekitara iina,” was created for the Doraemon exhibition at Tokyo’s Mori Arts Center Gallery in Roppongi last November, and incorporated into T-shirts and a plush toy.

To meet his fans at Uniqlo, Murakami donned a special suit consisting of royal blue pants, a shirt with a riotous floral print, and hat shaped like a swami turban with Doraemon’s face surrounded by more riotous flower print. Shoppers were asked to first buy products, then stand on a line that wound around the block, if they wanted Murakami to sign their purchases. At about 12:30 p.m., a spokeswoman said the store had nearly sold out of the 3,000 plush Doraemon toys it had ordered.

Murakami got into the act, kicking up his feet and kneeling to greet children, who were a bit taken aback.

The Japanese artist was showing his lighthearted side at Uniqlo, but Murakami is a serious artist whose work “Lonesome Cowboy 1998” sold at auction for more than $15 million. An exhibition, “Heads-Heads,” opens Saturday at Perrotin Gallery on Orchard Street in Manhattan.

During an interview in a back room at Uniqlo, Murakami closed his eyes when he was listening to questions and formulating his answers. A translator sitting beside him put his words into English.

“When Twitter came about, I was really studying social media,” Murakami said. “There were all these clusters of people interested in different things that on Instagram and Twitter became different communities. Before social media, people lived with the idea that I had, that I was the center of everything. Then I realized that there were so many zones that had nothing to do with me.

“Similarly, in fashion, there are different zones — Louis Vuitton, Uniqlo, etc. It was an important discovery when I was looking at the world with a muddled eye and I was ignorant. I thought, ‘Why are bags so expensive?’ Uniqlo has more people and is targeting different people. In terms of Uniqlo, I felt connected and felt an affinity for the company. My friend designed the Uniqlo logo. I’ve been thinking about Uniqlo in my own way. Now, after all these years, there are [Louis Vuitton] bags on the secondary market. Maybe you want clean and pristine new bags. That’s fine, but Louis Vuitton also has a factory dedicated to repairing used bags.”

A Uniqlo spokesman added that the retailer about 16 or 20 years ago produced T-shirts with art by Keith Haring and Andy Warhol. “We sold the T-shirts for $10,” he said. “Mr. [Tadashi] Yanai, [president of Uniqlo parent Fast Retailing,] believed that art is not affordable for most people. We were the first to put art on T-shirts. We always connected Warhol to democratizing art, and during the current era, the democratization of fashion is occurring. Uniqlo is always thinking about the democratization of fashion and art.”

Murakami’s products are on the second floor of Uniqlo’s Fifth Avenue flagship, in a circular room that often showcases seasonal products. The room has been transformed into a happy hallucinatory flower-power trip with colorful floral wallpaper and in the center, a floral-covered plush Doraemon that’s the size of a small child.

The manga centers on Doraemon, a robot-like cat who is sent back in time to guide a teenage boy, Nobita, through life’s struggles. Doraemon has become an anime series and media franchise. Murakami’s colorful artwork features the main characters, Doraemon and Nobita, Doraemon’s secret gadgets and Murakami’s characteristic flowers, splayed on the UT canvas. Released in 2013 in English for the Kindle, Doraemon has become one of the best-selling manga in the world.

The notion of a collaboration with Uniqlo was broached at the time of the Tokyo Doraemon exhibit. Murakami said that at the time, “there was talk about me doing a plush toy. I’ve always been making plush toys. Twenty years ago I started working with a company that made my flowers into plush toys. I still produce one toy every two months. When the idea came from Uniqlo, it felt very organic.”

Murakami discussed the nature of manga. “There are so many every year,” he said. “They emerge and disappear. The author of Doraemon was active since my childhood and was very popular.” Doraemon was written and illustrated by Fujiko Fujio, who died in 1996. “My brother is three years younger than me and Doraemon was his exact generation. I definitely lived during it and was influenced by it, but it was more my brother. Doraemon is such a national character. When I did my first collaboration 16 years ago, I really studied it more than the average person. I feel very close to the characters.”

The artist has strong ties to the music industry. Murakami’s work graces Kanye West’s “Graduation” cover. He worked with Pharrell Williams on last year’s ComplexCon in Long Beach, Calif. And Murakami’s art production and management company, Kaikai Kiki Co. Ltd., set up a space within the Art Zone at ComplexCon. Murakami also filled a gift shop with his limited-edition merchandise, showing that he can navigate the high and lows of the art world as well as he has in the fashion world.

Murakami collaborated with Louis Vuitton’s new men’s artistic director Virgil Abloh on an art exhibit at London’s Gagosian Gallery called, “Future History,” which closed on April 7. The works, which were produced in Murakami’s Tokyo studio, showed how some of their symbols melded. Abloh met Murakami when he was working as an art director for “Graduation.”

“Future History” will come to the U.S., the artist said. “I’m also doing all the visuals for an exhibition at the Modern Art Museum of Fort Worth.” A major retrospective, “Takashi Murakami: The Octopus Eats Its Own Leg,” will show more than 30 years of Murakami’s paintings up to his recent, never-before-seen work.

Asked if he would collaborate again with Vuitton, Murakami said, “Yeah, maybe. A friend of mine, Virgil Abloh — he was influenced by my collaboration with Louis Vuitton — is now artistic director there. No, I don’t think so, Louis Vuitton is always looking for something new.” Thinking about the question for a minute longer, Murakami said, “Maybe.”

Abloh’s “Pay Per View” exhibition recently bowed at the Kaikai Kiki gallery in Tokyo and Murakami has been singing his praises. “I don’t think it’s too much…to expect [Abloh] to make something happen as he gets involved in the game of art,” Murakami wrote in the show’s press materials. “It’s hard to grasp at a first glance. But Virgil’s work has gradually been changing rules of various games; I can’t suppress my excitement that the moment of change in the art world is about to begin with his involvement.”