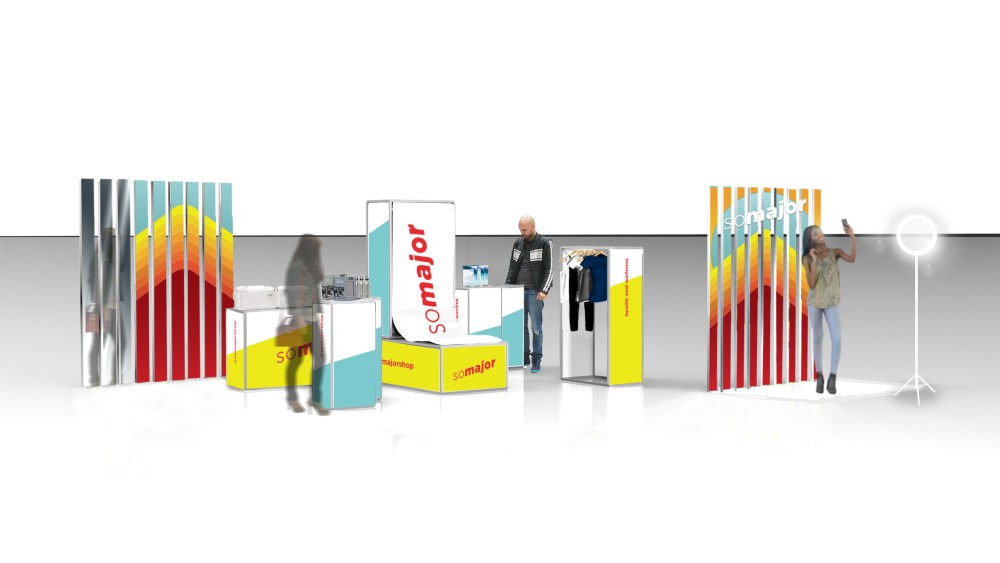 Pop-ups are everywhere, but an innovative twist on the format, with small “gallery-like” showroom settings, will make its debut at five Westfield shopping centers in June.

The concept, called “So Major,” has been developed by the Winston Retail agency, which intends to bring the format to a variety of venues in addition to malls, WWD has learned.

According to executives involved in the project, the pop-ups, at 150 to 200 square feet each, will change their merchandising theme monthly and stay open for just three days per month.

They will serve as rapidly changing showrooms where you can’t actually purchase the items displayed on site. Instead, a shopper, after providing some information to sales associates called “majorettes” on site, will receive an e-mail link to the So Major web site where they can order products for three weeks while the URL remains private. Then it opens to the general public — if there are products that haven’t sold out.

For the first iteration of So Major, the theme is health and wellness. There will be 10 to 12 products from Pair of Thieves, Fitbit, Yuni, Pravacana Mats, Dope Naturally, Vooray, HPE Activewear, Mikey’s and a few other brands.

The focus for each iteration of the format will be on product launches, presenting limited-edition items from smaller brands and direct-to-consumer labels. Pair of Thieves, for example, created a “bundle” of underwear and socks for So Major to launch next month. They won’t be available elsewhere until August and September. Fitbit is launching a new active tech watch with So Major, while Pravacana will have yoga mats that can be customized with artwork. Prices at the health and wellness pop-ups will range from $30 to $200.

“As we roll out future pop-ups, we will be able to learn from the customer and deliver the products, brands and experiences they want, which is what we are all about,” said Jan Croatt, founder and chief executive officer of Winston Retail.

She characterized So Major as “an innovative retail marketplace catering to male and female shoppers with multiple product categories and first-to-market items to encourage and maintain customer excitement.”

In July, the theme shifts to travel, and for August, it’s all about fall must-have fashions.

“Our goal is to entice and get customers excited about the product so we’ll look at all of the categories out there and figure out how to bring high- and low-priced brands together because that’s how everyone shops today,” said Paul Witt, chief experience officer at So Major. “To date, we have solidified more than 10 themes.”

Westfield has the launch exclusive, but it’s only a temporary exclusive on the concept, as Witt explained. “This is designed to be in many different locations. The idea is a gallery that’s not physically inside a store. It’s completely mobile. This could go in movie theaters, college campuses, shared work spaces, music festivals and art festivals. We have the organization to deploy 20 to 40 of these at a time.”

The July travel pop-ups are set for L.A.’s LAX Airport, Terminal One and New York’s JFK Airport, Terminal Eight. They will also be seen at Westfield’s in Century City, Valley Fair and Montgomery Mall in Bethesda, Md. shopping centers.

The mall pop-ups will be in the common areas, in higher-priced wings, Witt said. As a division of Winston Retail, So Major will operate the pop-ups, providing project management, design, staffing and other services. “It’s a turnkey operation,” said Croatt.

She also said So Major is a more affordable and practical solution than when brands build and market a single location. “That cost of entry can be a barrier for brands, but 10 brands participating mitigates the cost.” Typically, she said, between the build, product delivery and staffing, it can cost $175,000 to $250,000 to stage a pop-up for three months or so in a prime location.

The 16-year-old Winston Retail agency will receive activation fees  from the So Major pop-ups, which will vary depending on the brand and the concept. The agency has in-house service and creative experts in offices in New York, L.A. and San Francisco, and taps a network of professionals for projects.

“The So Major model is about driving traffic to the brick-and-mortar environment,” Witt said. “You can’t purchase on premise. Our ‘majorettes’ will take down your information and send you a link, where you have three weeks to order. It’s meant as a flash activation. This is not a traditional e-commerce model.” Witt added that the link can be passed along to family and friends and that in two or three days, orders will be shipped by the brands. Deliveries should be received in about a week.

Asked why only 10 to 12 items are being presented initially, Witt replied, “We want to stay focused on the idea and want to see how successful we are with this streamlined merchandising presentation.”

“The consumer is expecting new items and new approaches to be compelled to buy something,” said Croatt.