Francois-Henri Pinault is assuming the helm of PPR, the $30 billion retail and fashion giant controlled by his family, succeeding Serge Weinberg. 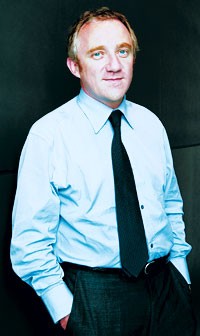 Pinault, 42, is assuming the helm of PPR, the $30 billion retail and fashion giant controlled by his family’s holding company Artemis, effective March 21.

He will succeed Serge Weinberg, who as chief executive officer steered the conglomerate through a dramatic transformation as it shed timber, finance and electronics businesses and absorbed Gucci Group, the world’s third-largest luxury player.

PPR made the announcement following a board meeting Wednesday night and characterized it as an amicable parting, with Weinberg maintaining ties to PPR and the Pinault family, for which he has worked for 15 years.

Weinberg will head a new private equity fund, in which Artemis will hold a stake. The initial kitty is believed to contain several hundred million dollars, with a mission to invest mostly in unlisted companies in all sectors except high tech.

Weinberg also will remain a director to several of PPR’s far-flung businesses — including Gucci Group and Fnac, a specialty chain specializing in books, music and consumer electronics — and will join the Artemis board.

Recently, there have been rumblings of growing friction between Weinberg and Pinault, who seems more at ease in the media-drenched fashion world.

Rumors in Paris have swirled since November that Weinberg was mulling a return to politics, or joining Carrefour, the world’s second-largest retailer after Wal-Mart. But he vehemently denied any plans to exit PPR.

Still, it’s clear that the ambitious Pinault is eager to get his hands firmly on the family business as it enters an exciting new era. Indeed, when he was named chairman of Artemis in May 2003, he described his new role as that of entrepreneur.

“Now I have the final liberty to do what I want and do it in the way I want to do it,” he told WWD at the time. “Most people think that the son is more of a manager. I may have started that way, but that’s not the direction I’m heading in now.”

Besides PPR, Artemis’ other businesses include the Christie’s auction house, the Chateau Latour winery, a theater in Paris and a French soccer team.

François Pinault, 68, maintains a role in the entity that controls the family’s investments, but he has lately been absorbed in his Tadao Ando-designed contemporary art foundation under construction in western Paris. He is also still embroiled in the Executive Life lawsuit stemming from allegations that he broke the law when he acquired the troubled California insurer’s junk bond portfolio from French bank Credit Lyonnais, making huge profits. He paid $185 million in fines to settle a U.S. federal suit last March. On Feb. 15, a civil suit is expected to get under way in California.

A graduate of France’s elite business school HEC, François-Henri Pinault’s first job was promoting fashion for the French Trade Commission in Los Angeles. He even organized a couture show, from model casting to seating plan.

But he quickly took up management positions at PPR, including the CFAO African trading company, its wood and construction materials business, and most recently Fnac. There, he orchestrated Fnac’s first acquisition in its 50-year history — the Surcouf home electronics retailer — which went on to become an important, fast-growing part of the business.

He also founded the Fnac Junior concept, catering to children, and the Fnac.com e-commerce site. When Pinault left Fnac in May 2000 after three years at the helm, sales had grown to some $3.5 billion from $1.5 billion.

He went on to head PPR’s Internet division, gaining a reputation for business prudence. At a time when many companies expanded helter-skelter, Pinault stuck to a brick-and-click philosophy, opening sites only for existing PPR brands. Although PPR was criticized at the time, the approach has been validated.

More comfortable with the limelight than his billionaire father, Pinault has been a smiling and confident presence in fashion’s front rows since PPR took control of Gucci Group, a daring move which cost 7.2 billion euros — more than $9 billion at current exchange — for brands including Gucci, Yves Saint Laurent, Bottega Veneta and Boucheron.

A self-described fashion fanatic who collects luxury timepieces and can sometimes be seen toting big Yves Saint Laurent shopping bags on the Faubourg Saint Honoré, Pinault once confessed he shops more than his wife. “I love it. Every once in a while I’ll indulge in a custom suit,” he said in a recent interview.

He is also bullish about Gucci Group’s prospects, upon which PPR will lean heavily to increase its profitability in the coming years.

In a statement Wednesday, Pinault thanked Weinberg for increasing PPR’s sales, operating results and international profile. For example, 50 percent of company sales are now generated outside of France.

“Today, the challenge for the group is to consolidate its positions and grow further by building on the quality of its assets and the know-how of its teams,” Pinault added in the statement.

Weinberg, a graduate of France’s prestigious Ecole Nationale d’Administration, began his career in the French government, most notably as cabinet chief for then-budget minister Laurent Fabius. He joined PPR in 1990 as managing director of CFAO, rising through the ranks to become ceo of PPR in 1995.

He helped oversee the transformation of the group from a far-reaching conglomerate with holdings ranging from lumber to industrial equipment into the pure retail and luxury group PPR is today. While in the heat of his departure from Gucci Group last spring Ford criticized Weinberg for his lack of knowledge of the fashion world, Weinberg seemed unfazed by the barbs. In an interview last June, when he was serving as interim ceo of Gucci as well as ceo of PPR, Weinberg told WWD: “I believe in facts and figures.

“One of the big errors in business is to be a theologist,” Weinberg said, adding that to draw conclusions from the exits of Ford and De Sole was dangerous. “Recipes do not exist in business. It would be too easy.”

— With contributions from Robert Murphy