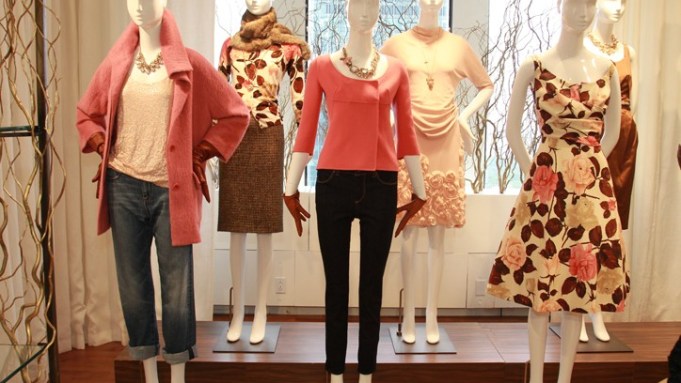 Those signature red doors at Talbots are coming off their hinges.

“They’ve become a bit of a hindrance for attracting new customers. They see the red door — they think it’s their grandmother’s store,” said Trudy F. Sullivan, president and chief executive officer of the $1.24 billion Talbots, who for three years has been leading a turnaround of the chain, long a predictable mainstay in malls and on main streets across America.

There’s been little left untouched aside from keeping the classic appeal aimed at women 40 and older. Talbots’ major shareholder switched from Aeon in Japan to BPW Acquisition in the U.S. through a merger completed in April, changing the board and ownership and deleveraging the company with $420 million in debt paid down. The chain also established a $200 million credit facility with G.E. and has doubled the capital expenditure budget to $40 million this year for upgrading stores, information technologies and the Web site.

Earlier, the store count and corporate staff were reduced; the J. Jill division was sold, and the kids’ and men’s categories were discontinued. In addition, the two big annual clearances were dropped in favor of taking less dramatic markdowns monthly to keep inventories cleaner and to sustain a steadier flow of merchandise. The apparel sourcing switched to an exclusive partnership with Li & Fung, saving costs and speeding product development, though Talbots still does all its own design and recruited a chief creative officer, Michael Smaldone, to focus the fashion and sharpen the image. The result: Styles are chicer, with shapelier fits such as sleeker pants with lower rises for a younger look, though the collection is still considered classic and traditional but with added twists and embellishments.

“Don’t you think most significant brands go through moments of profound change?” Sullivan suggested. “Look at Coach. Look at Burberry. Look at Ralph [Lauren]. This is Talbots’ moment of profound change. We are not reinventing Talbots. We are trying to reconnect to the DNA. And it gives us permission to really push the product and the marketing in a very exciting way and hopefully bring customers back and attract new customers.”

In the Chicago, Dallas and Washington markets, Talbots is “refreshing” 14 stores with new logos, facades, mannequins, floors, fixturing and doors, which are now fancy brass ones. Taking the retail program one step further, a “store of the future” is in the works featuring an upscale residential feel with area rugs, marble nesters, ceramic tiles, étagères, five major rooms for different merchandise stories, brass-rimmed windows and a brass door. The 5,500-square-foot site, located in the Garden State Plaza in Paramus, N.J., is expected to open Nov. 15.

“It’s probably the most expensive store we have ever done, but we are only doing one and it’s not outrageous. It’s in the top quartile of our competitive set,” said chief marketing officer Lori Wagner. She wouldn’t divulge the cost of the store but said it will have “kind of a boudoir feel,” which no one would have associated with Talbots a season or two ago. One day, even the original Talbots site in Hingham, Mass., where Nancy Talbot founded the business in 1947, could sport the new look, but it’s the sentimental favorite in the 580-unit fleet, with a historic flavor the company may want to retain.

“The biggest opportunity for Talbots is to improve productivity on the square footage that it owns,” Sullivan said, noting sales per square foot are only $250. A “segmentation” strategy is in place whereby stores have different designations to determine how each should be merchandised. They’re no longer uniformly stocked. The prices, category emphasis, or styles, whether casual or more refined, vary depending on location.

“We have over 4 million square feet over one brand. You can’t treat every story the same way,” Sullivan said. “Some others refer to this as localization; our term is segmentation.”

There are two “flagships,” in Boston and Manhattan; about 100 “premium” stores in A malls and lifestyle centers, possibly located near a Neiman Marcus or a Nordstrom, and requiring the most upscale elements of the Talbots collections, as well as about 350 classic stores that would take a more traditionally weighed assortment, and 100 “always” units, which are the most casual and lowest priced.

Sullivan also cited upscale outlets, with 20 in place and 60 seen by the end of 2012, and accessories, petites and large sizes as growth opportunities in the near term.

On Aug. 15, the company spotlights it’s new image by breaking out an advertising campaign featuring Linda Evangelista nostalgically photographed by Mert Alas and Marcus Piggott, and with the company’s brand platform, “Tradition transformed.”

“She’s not the face. She’s not the spokesman, but we feel she represents a successful woman that speaks to 40-plus-year-old women,” Sullivan said. For spring, Evangelista will be succeeded by another celebrity model or actress, to be determined. “We’ve got some traction. Before, we couldn’t put the brand out there,” said Wagner.

Also, next week is Talbots’ first “full-blown” denim launch, including 12 washes and 10 fits with two major ones — the Heritage, which is a little higher on the waist, and Signature, a little lower.

For decades, Talbots thrived largely through store openings pumping up volumes rather than productivity gains, and sold a less discriminating consumer, who opted for safe, conservative fashion at moderate to better prices and often low-quality fabrics. But consumers have become value-driven and discriminating and competition has been rising, forcing Talbots to overhaul its dowdy fashion image and become relevant again.

“I did get a letter from an 83-year-old customer who wrote, ‘You are finally getting your groove back.’ Our customers are not shy,” said Sullivan. “They tell me what they like and what they don’t like. They told us loud and clear we needed to fix the product. Even those 65 and older told us the brand was for someone older than themselves.”

Sullivan is just a few words short of declaring Talbots turned around. “You will never hear me say that we’re done,” she said. “But I do believe we are a much better and stronger company than a year and a half ago. I am not declaring victory but it doesn’t mean I don’t feel very proud of where we are.”

Talbots is still not profitable on a net basis, losing $4.4 million and $29.4 million last quarter and last year, respectively, due largely to restructuring costs and the acquisition. The retailer has recently turned profitable on an operating basis. “The really significant pivotal quarter for us was the third quarter of 2009, when we broke back into profitability,” Sullivan pointed out. “The fourth quarter we were profitable, and the first quarter [of 2010] we were profitable, just shy of 10 percent.” The company eked out $2.9 million in operating profits the first quarter, $4.5 million in the fourth and $22.4 million in the third quarter of 2009.

Asked when can one declare a company “turned around,” Sullivan replied, “That’s a hard one to answer specifically. A lot of people look at consecutive quarters of earnings improvement and actual earnings, and once you wrapped around on your fourth consecutive quarter, I think people feel it’s pretty well gelled. That’s what I would use as a benchmark.

“We are on a good trajectory,” she added. “We like to believe that midteens operating goals are in our future.”