The Talbots Inc. has a re-engineered collection for fall that emphasizes wear-now looks. 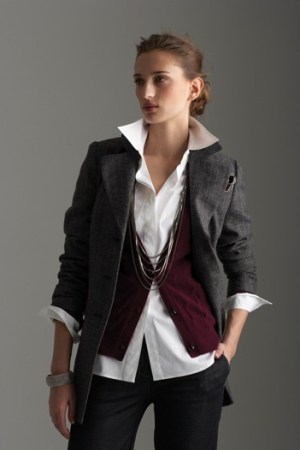 Despite cutbacks and difficult business trends, The Talbots Inc. is moving forward in its mission to end the slump and modernize its image.

The Hingham, Mass.-based specialty chain has a re-engineered collection for fall that emphasizes wear-now looks, raises the value proposition by injecting style, draping and detailing without elevating prices, and reflects stepped-up turnaround efforts by the new management team formed in the last 18 months.

In addition, Talbots has broadened its targeted age range — from 40-something to over 65 — whereas before the average customer age fell in the 55- to 65-year-old range.

On the store front, haberdashery shops are being rolled into the top 250 of Talbots’ 600 units, and scarf bars, roughly 10 to 15 feet in length, are being tested.

Significantly, a major remodeling plan is in the works. The chain already has a new logo and new shopping bags.

“The stores should feel like boutiques — they should be more modern and reflect our catalogue books,” said Lori Wagner, executive vice president and chief marketing officer. In terms of image, Talbots stores lag the catalogues, though brick-and-mortar accounts for about 70 percent of sales while catalogues and Internet account for about 30 percent.

According to Michael Smaldone, Talbots’ chief creative officer, the design, merchandising and marketing teams now operate under a “tradition transformed” brand filter conceived to help guide management as it works to overhaul the business.

Many of these changes disclosed Thursday are expected to be outlined during the fourth-quarter conference call Tuesday. In the third quarter, Talbots reported a net loss of $14.8 million from continuing operations while comparable store sales declined 13.9 percent.

Recently, Talbots reached a deal for $200 million in financing and said it would eliminate roughly 370 jobs, or 17 percent of its corporate-level workforce, as well as close about 20 stores. Talbots will use the $200 million to pay off debt associated with the 2006 acquisition of J. Jill Group Inc., which the firm is now trying to sell.

The company also disclosed that sales in the fourth quarter ended Jan. 31 fell 23.4 percent to $328 million from $428 million a year ago.

Among some of the highlights of the fall collection, previewed at Talbots’ New York creative offices, are cardigans with ruffles, bows and rosettes; printed scarves and waist sashes; sheath and lace evening dresses from $129 to $149; lady jackets that supplant the former preoccupation with traditional lapelled jackets; tweeds with more color; camel coats; faux crocodile bags, and flannel trenchcoats. The haberdashery shops are expected to be in place by August and positioned prominently in the front of stores with tops in solids and prints and with ruffles, bows and pleats in the $49 to $69 price range. The chain also launched swimwear earlier this month.

Talbots is also taking the advice of a new focus group composed of several of its best customers. “The panel will help us stay honest,” Wagner said. “Trying to appeal to a very broad age range, 45 to 65, is not easy.”