Part of the brand's overall group strategy is to cultivate younger customers with the Generation brand. 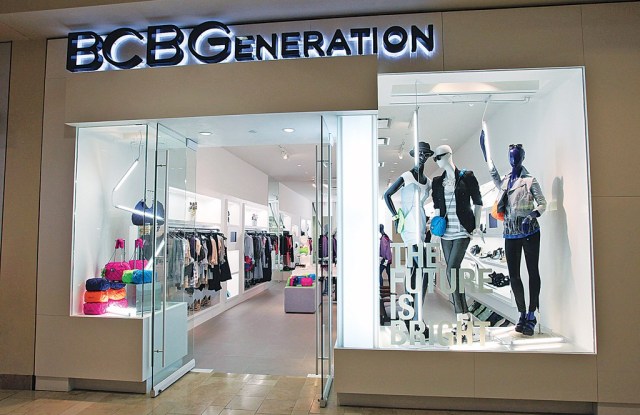 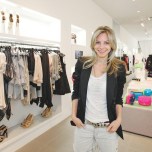 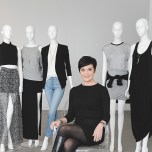 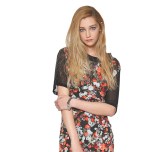 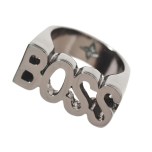 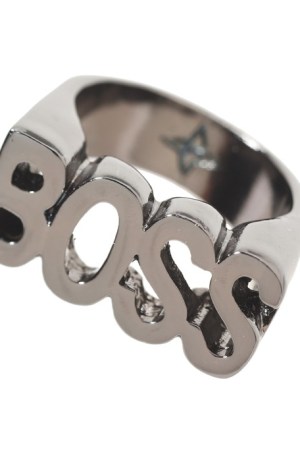 A ring from BCBGeneration. 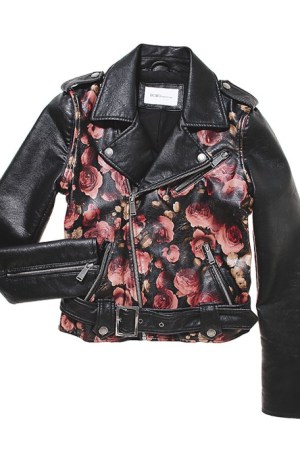 A jacket from BCBGeneration. 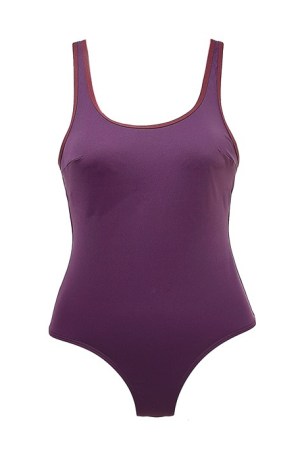 Coveted by many marketers and understood by a few, the female Millennial easily garners myriad descriptions: She’s fearless, tough, sweet, epic and the boss. BCBGeneration has managed to capture them all — on a best-selling bracelet.

Retailing from $12 to $26 and offering the option to craft a personalized affirmation out of metal letters, the slim polyurethane bands pop in vivid colors and sassy prints. They also exemplify the knack that Generation’s creative director, Joyce Azria, has for combining a creative idea with commercial know-how, mixed with some fun, cheek and an outlet for self-expression favored by Millennials.

“That bracelet is cute, isn’t it?” said a perky salesclerk in Generation’s Glendale, Calif., store, of an $18 white bracelet bearing letters spelling “BOSS.” Nearby, a 13-year-old customer shows a band spelling out her name — “BELLA” — to her mom and friend. Standing beneath giant gold “#GEN” blocks set on a shelf high above her head, the salesgirl raises her bangle-festooned arms as if to deflect a punch. “It’s a must-have,” she said.

“Our Gen girl is really a communicator of who she is on the outside,” Azria said. “She’s communicating through her wardrobe.”

The affirmation bracelets have since spawned a cap, handbag, gloves and pajamas, all sporting positive phrases, to help Generation grow as a stand-alone brand following the merger of BCBGirls and To the Max in 2008. Costing about 30 percent less than BCBG Max Azria, Generation could have been dismissed merely as the “little sister” fashion brand.

Under the direction of Joyce Azria, the eldest of Max Azria’s five daughters, it’s already forged its own brand identity in the U.S., Canada and Mexico. It operates 16 freestanding stores in the U.S. and Puerto Rico. It broke into the wholesale market in Europe last fall via specialty stores and European-based Web retailers including Asos.com in the U.K. and Zalando.com in Germany. By August, it will be in a total of 100 countries, from Australia, Brazil and China to Russia, Saudi Arabia and Thailand, through a broadened delivery map for e-commerce.

All these efforts lead to the goal of increasing sales this year by 29 percent from last year. Over the next three years, the year-over-year target for sales growth ranges between 25 and 35 percent. Company executives declined to disclose current sales for the division, but in 2011, the latest year available, sales for Generation were estimated at $100 million, or 10 percent of BCBG Max Azria’s then-total revenue.

“Generation is important to BCBG Max Azria in that it is the entry point,” said Annette Schatz, executive vice president and general manager of Generation. “It’s the point of entry that [the customer] can afford and aspire. There is that sweet spot, that whole space in the market, where BCBG doesn’t reach down.”

The 32-year-old Azria, who joined a year after Generation’s launch, feels the weight on her shoulders. “It’s a huge responsibility that I have,” she said. “It’s to set up the customer before she goes to BCBG.”

As companies take note of Millennials’ spending power — $200 billion in the U.S., according to a study conducted last year by WWD and Berglass + Associates — the competition to snare a chunk of it is intensifying. Generation must contend with H&M, Zara and other fast-fashion players that leave a global footprint; mass retailers like Target that have finessed their fashion through designer collaborations; popular online retailers like NastyGal.com that have begun designing their own wares, and flash-sale sites that have opened sample sales to anyone with an Internet connection.

Schatz said the company feels pressure not only from fast fashion, but from “all channels and all touch points. Technology has democratized the entire playing field.”

Like other fashion brands, Generation faces challenges. “The macro[economic] environment has certainly been ever-changing,” Schatz said. One way to overcome that is to figure out the equation for price and value, not to mention the versatility that each garment must offer for multiple uses. For instance, customers have snapped up a $68 Fifties-inspired black-and-white bikini top with mesh detail that can be worn as swimwear or lingerie.

Generation also benefits from certain competitive advantages due to its link with BCBG Max Azria. It gleans trade tips for producing key categories such as dresses, sweaters and rompers from the flagship label.

“We have a lot of institutional knowledge around something that could be hard,” Schatz said. “We do share all that information across all the brands.”

Generation has another secret weapon in the Azria family and their circle of compatriots. Joyce Azria’s famous friends, like Zooey Deschanel, make regular appearances on her Instagram page. Then there’s Max and Lubov Azria, Joyce’s father and stepmother, who head the business and creative aspects, respectively, of the parent company.

Generation’s strategy for growth includes improving its e-commerce business, increasing the points of sale and broadening the product categories, made either in-house or by a licensee. It counts 1,795 points of sale for wholesale and retail, excluding its freestanding stores and online sales. Wholesale accounts include Nordstrom, Belk, Bon-Ton and Von Maur in the U.S., as well as The Bay in Canada and El Palacio de Hierro and Liverpool in Mexico. Generation also has 49 branded shops in Lord & Taylor, 12 in Bloomingdale’s, 26 in Macy’s and 106 in Dillard’s. The spaces in Bloomingdale’s, Macy’s and Dillard’s are also considered partner shops, in which Generation makes the buys for them.

In terms of categories, Generation offered shoes with apparel from the get-go, in fall 2008, as a result of inheriting the footwear license with Greenwich, Conn.-based Camuto Group from BCBGirls. In fall 2010, the brand introduced jewelry produced by New York’s Trebbianno LLC. It offered its first denim collection from its in-house design team in fall 2011. Last spring marked the debut of swimwear from Montreal-based Trimera Group, outerwear from New York’s Herman Kay Bromley and hats and scarves from Collection 18, also based in New York. The following fall, Trimera Group added intimates and Collection 18 proffered cold-weather accessories. Generation also designs and produces its own handbags.

Given the size of the Millennial market, along with unexplored categories and unrealized retail expansion for Generation, it’s certainly possible that Generation could overtake BCBG Max Azria in sales. “We could certainly build a strategy to get those numbers,” Schatz acknowledged before adding: “I don’t think we’ve seen the end of growth for BCBG [the brand].”

While Generation doesn’t set a cap for its retail prices, it emphasizes accessibility and affordability for its young customers. This spring, the most expensive item is a pair of boots at $208, complementing the $168 mint-green fake leather biker jackets, $98 neon skinny jeans and $68 white cotton-poly macramé shorts in the stores.

Beauty is the next logical market for Generation. After collaborating on pastel-tinted camouflage nail wraps with Scratch, it hooked up with cosmetics company Too Faced and skin-care line Aveda.

“I can’t wait to do makeup,” said Joyce Azria. “I want to make coral-color lipstick because I’m into it right now.”

A petite blonde with bright blue eyes, Azria infuses the products with her positive, playful personality. But she also trains an objective eye to give the customers what they want. She joined Generation after launching BCBG Max Azria Swim at age 19 and running her own fashion brands, Joyaan and Aristocrat Denim. She also helmed Manoukian and Max and Cleo at various points when the company was laying out exit strategies for those brands. With Schatz’s appointment as executive vice president and general manager last December, and Bernd Kroeber recently joining as vice president of design after working on Max Azria’s business with Miley Cyrus, Joyce has been able to focus on her role as creative director.

“[Before] I had to report on how the business was doing from a financial point of view. I had to design the line, think of an e-com strategy and sweep the floor,” Azria said of her life before Schatz and Kroeber. “It really allows me [now] to be a true creative director and concentrate on running the customer touch points.”

Azria’s channeling her creative energy not only into the designs. She also films videos showing how to wear different pieces. Only after the tab for new arrivals, her compilation of favorite items, including a $178 black pleated tulle skirt and a $68 blush-colored fleece sweater slashed to expose the shoulders, for “Joyce’s Picks” is the second-most-clicked button on Generation’s Web site.

That factoid doesn’t surprise people like Annemarie Jazic, director of contemporary sportswear for Dillard’s. With 278 doors spanning 29 states, Little Rock, Ark.-based Dillard’s has partnered with Generation since the line’s inception, placing it as a cornerstone of its young contemporary zone.

“When Joyce came on as the creative director for BCBGeneration, we saw an immediate change in the assortment as it became much more exciting and on trend,” Jazic said. “Joyce not only knows how to spot the next big fashion trends, but she is also a great merchant and understands the target customers’ lifestyle and what fashion they will be willing to adopt.…It has allowed our customers to buy into the BCBG brand earlier than they might otherwise be able to with the BCBG Max Azria line, which is overall more serious, mature and dressy.”

Besides apparel, Azria strategizes about things that she thinks are “so Gen.” Mad Libs for fifth graders are turned into Gen Libs for twentysomethings with fill-in-the-blank forms like “On my way to work I think about [a peachy noun].” Rose and tap water are bottled in spritzers branded “Good Vibes” to cleanse the air.

Still, Generation had to work out the technology for itself. Generation’s Web site once existed on the main BCBG site. It launched as an independent site in February 2012 and started streaming more video and featuring more unique content. A blog separate from commerce-focused bcbgeneration.com is dedicated to Millennials’ multifaceted interests, ranging from art and music to philanthropy and social causes. Called The Generation Nation, the site speaks in its customers’ quirky — and oft abbreviated and personalized — lingo. Photos on the Instagram service are referred to as Genstagrams. Interspersed with promotions for its new intimates line and latest ad campaign are perennially popular puppy photos. Plus, DIY tutorials show how to apply the popular affirmation letters to a candle holder carved out of a green apple.

“The product has to feel authentic and real,” said Schatz.

One of Azria’s jobs is to determine if something is of interest to the customer. For instance, last November, Generation held its brand summit to plan for 2014 with its licensees at Pour Vous, the latest hot spot on Melrose Avenue, decorated to evoke a Parisian cocktail lounge. Azria chose the venue because it reminded her of where “the Gen girl” would hang out in Los Angeles, according to an attendee.

Credit for the affirmation bracelet also goes to Azria.

“She saw a picture of something with a word on it,” said Sophie Rietdyk, president of licensing and international business for BCBG Max Azria Group, recalling the birth of the bracelet in 2012. “That was what she wanted. So we came up with a bracelet.”

The customers have taken to the trend so much that there’s a devoted Affirmation Shop on the e-commerce site.

Said Schatz: “That insight is probably one of the most important DNA factors of the brand.”