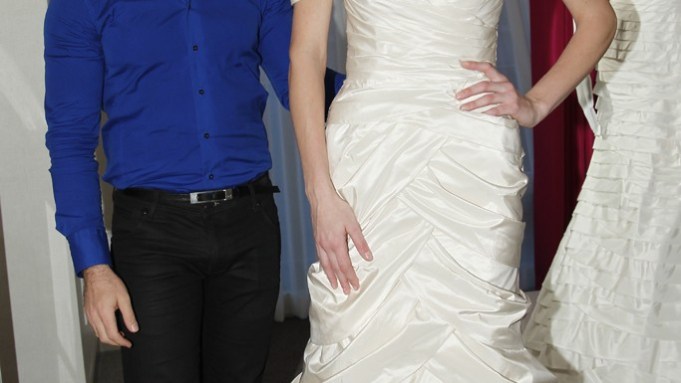 “I’m too sexy” is something Bebe managers might never say about their brand, though they’ve thought about it.

There’s still room for those short, deep V plunge cocktail dresses and superskinny Bebe-logoed jeans, but as the 35-year-old contemporary collection transforms to a head-to-toe business, it’s showing some tamer sides. A bridal collection will be launched in March. Bebe’s fourth fragrance called Wishes & Dreams launches late April. A new lifestyle shoe strategy is under development. A broader array of denim and dresses is already evident, and the company is looking to gain ground in wear-to-work apparel, where the look has been more “dressed to kill” than dressed for office.

“Bebe is back and expanding market share,” stated Emilia Fabricant, president of Bebe Stores Inc., during a preview of Bebe’s debut bridal collection at the Gansevoort Hotel in New York earlier this month. “The 25- to 35-year-old woman — that’s still the core, but we do see it expanding.”

Developing a bridal business for the first time, said Fabricant, is “a natural extension for us.…The gowns are timeless but modern. That’s Bebe.”

Bebe was founded by majority shareholder Manny Mashouf in 1976 at a time when bridge, juniors and misses ruled fashion and the contemporary category barely existed. For many years, the pioneering chain maintained a singular status for its daring ways, though in recent times has been cut down by the rise of competitors such as Forever 21, Zara and H&M. Since the recession, the $500 million specialty chain has closed stores, shed $100 million in revenues and has endured a decline in profitability, which in the latest fiscal year ended July 2 came to $6.1 million, or about half the net of three years ago.

Humbled but not defeated, Mashouf has established a new team, which has been striving to restore historic profit levels and orchestrate strategies to turn the business around. Fabricant, formerly divisional merchandise manager for Barneys Co-op, founder and chief executive officer at Cadeau Maternity, and president and chief merchandising officer at Charlotte Russe, came on board 15 months ago and has since added new vice presidents for marketing, visual, e-commerce and international, and an executive vice president of merchandising Renee Bell, who is on her second tour of duty at Bebe after an interlude with Metropark USA.

There are signs of progress, attributed to advances this year in product quality, inventory control and full-price selling. For the quarter ended Oct. 1, net income rose to $2.4 million from $300,000 in the year-ago period, and comparable-store sales were up 7 percent to $126.3 million, compared with $115.3 million. The stock has been performing well and set a fresh 52-week high of $8.48 in trading on Tuesday. Also last quarter, traffic was flat yet the conversion rate — turning browsers into shoppers — was up 7 percent. Units per transaction rose 6 percent.

Significantly, the company seems responsive to customers, absorbing feedback off Facebook, tuning into women’s wardrobing needs and getting quicker to seize upon sales trends like its fast-fashion competitors. For example, a Chanel-inspired shawl collar bouclé jacket, priced at $189, was presented last fall as part of a suit, though women were buying it as a separate. “I could see right away Bebe reacted and now there are more jackets, along the same lines,” said retail analyst Jennifer Black. “They’re perfect for wearing with jeans or with nice pants. Women want to mix and match.”

A “360-degree approach” to recapturing customers has been adopted, Fabricant said, involving launching products and categories, and stepping up special events and social media, with 1.9 million Facebook fans gained in the past year. She also said the strategy focuses on creating in-store visuals for “clearer fashion statements” and easier shopping. Stores in NorthPark Center in Dallas and Aventura, Fla., have been remodeled, inside and out, and are being monitored as prototypes. The South Beach, Fla., unit was also remodeled though the facade was retained due to landmark considerations.

Bebe Sport, the active, Lululemon-inspired subbrand, was brought back into Bebe stores and online earlier this year after a hiatus, though the Bebe Sport shops were all closed. Overseas, licensed Bebe stores have been proliferating, with 102 operating in 20 countries, and 20 additional locations seen operating by June 30, the end of the company’s fiscal year.

The upcoming Wishes & Dreams fragrance, developed and distributed by Inter Parfums Inc., is described as “a dreamy blend of fresh florals, sensual woods and white amber.” Prices will range from $38 for a 30-ml. bottle to $70 for a 100-ml. bottle.

Bridal will be sold by appointment at four Bebe flagships: Oak Street, Chicago; SoHo, N.Y.; Rodeo Drive, Los Angeles, and Aventura, and online. Initially, there will be 10 gowns in silk taffeta, silk satin, charmeuse, georgette, organza and chiffon, and corsets for a custom look. They will range in price from $950 to $2,500, falling in a zone between David’s Bridal and J. Crew. Once a gown is selected it’s ordered for a 60- to 90-day delivery.

“I wanted to create beautiful wedding gowns with a custom feel and attention to detail,” said Rami Kashou, Bebe’s bridal designer who was runner-up on “Project Runway” in season four, and is a contestant in the upcoming “Project Runway: All Stars.” Kashou characterized the Bebe gowns as “feminine, elegant, timeless and romantic” and “a celebration of the hour-glass figure.”

Veils, clutches, jewelry and gifts will also be offered, as well as a line of 10 bridesmaids’ dresses, priced from $150 to $300, that are suitable for occasions other than weddings and are either stretchy or flowy; long or midlength. “They’re cool, sexy cocktail dresses,” Kashou said.

Asked if Bebe is indeed getting tamer for a wider appeal, Fabricant replied: “Everything we do starts with Manny’s vision of contemporary fashion with a sexy, feminine edge,” though, she added, “we have upped the sophistication and design quotient and are offering versatility that’s getting us increased closet share.”