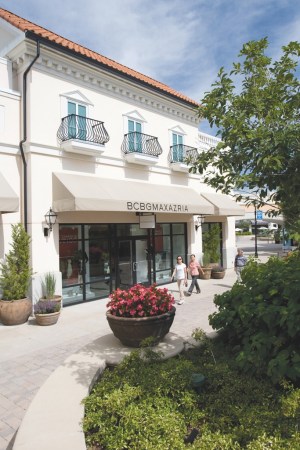 1986 Construction starts on a center in Kittery, Maine. Liz Claiborne will build its first factory direct store there. The Kittery center is the oldest in Tanger’s portfolio.

1987 Tanger opens a center in Martinsburg, W.V., drawing shoppers from Baltimore and Washington, and a second center in the resort area of North Conway, N.H.

1989 Tanger opens a second center in Kittery, Maine, plus a new mall in Bourne, Mass., near Cape Cod. Tanger enters the Atlanta market with a center in Commerce, Ga.

1991 Tanger expands to the Midwest with a center in Williamsburg, Iowa, along the busy I-80 corridor.

1993 Tanger goes public and becomes the first outlet developer to be listed on the New York Stock Exchange (NYSE: SKT) as a publicly traded Real Estate Investment Trust, or REIT. The move opens new avenues of financing for the outlet center industry.

• Tanger becomes the first outlet center developer to build more than one million square feet in any one year.

• Tanger is recognized by the American Cancer Society with the Excalibur Award for the second straight year, recognizing companies that contribute more than $100,000 to fight cancer.

1996 Tanger Outlet Centers is listed in the “Top 50 Public Companies” in North Carolina.

• Tanger launches the “Relax. It’s Guaranteed” customer service program nationwide, promising its customers the best price on products sold at the centers, offering a cash refund of the difference on the spot, no questions asked.

• Tanger completes expansions in Locust Grove, Ga.; Gonzales, La.; Branson, Mo.; Williamsburg, Iowa, and San Marcos and Terrell, Tex. It also breaks ground on its second location in Riverhead, N.Y. Once completed in 1997, the Riverhead center will be the largest in Tanger’s portfolio and one of the largest open-air brand-name factory outlet centers in the world.

1997 Tanger acquires an outlet center in Nags Head on North Carolina’s Outer Banks, as well as the Shoppes on the Parkway in Blowing Rock, N.C., and the Five Oaks center in Sevierville, Tenn., which it expands later that year.

1998 Expansions are completed in Commerce, Ga.; Sevierville, Tenn., and Phases III & IV in Riverhead, N.Y., where Tanger dedicates a “Tiger Salamander Preserve” on the center’s property to help protect the endangered reptile. The center will ultimately have 180 stores.

• Tanger acquires an outlet center in Fort Myers, Fla., at the entrance to Sanibel Island.

• Tanger closes the year with 29 centers in 20 states and more than 68 million customers.

• Tanger breaks ground on a 400,000-square-foot center in Myrtle Beach, S.C. — the nation’s second-most-popular summer tourist destination behind Orlando. It is its first center in the state and will feature some 60 stores when it opens in July 2002.

2002 The Tanger portfolio expands to 30 centers in 21 states with acquisition of the Tanger Outlet Center at Kensington Valley in Howell, Mich. The 325,000-square-foot center is located along I-96 and attracts shoppers from Detroit and Lansing.

• Tanger is named exclusive manager of a 326,000-square-foot outlet center in Vero Beach, Fla. Renamed the Tanger Outlet Center at Vero Beach, the new center is part of Tanger’s strategy to include third-party management.

2003 Stanley and Steven Tanger ring the closing bell at the New York Stock Exchange, commemorating Tanger’s 10th anniversary of trading on the exchange.

• After just one year, the Myrtle Beach center adds a Phase II expansion with 22 stores. The center draws more than 4 million shoppers in its first year.

• Tanger’s annual Breast Cancer Awareness Campaign surpasses $4 million in funds raised. The Stanley K. Tanger Breast Cancer Fund is established, and the Pink Card is introduced as a major method of raising funds for the cause.

2007 Tanger breaks ground on its second center on Long Island, in Deer Park. With the feel of an Old World marketplace, the 800,000-square-foot Tanger Outlets at the Arches in Deer Park opens in summer 2008 with upscale stores including Neiman Marcus Last Call and Saks Fifth Avenue Off Fifth, restaurants, cafés, a 16-screen Regal Cinemas and an IMAX theater.

• Tanger surpasses the $5 million mark in donations to the American Cancer Society and a dozen other breast cancer-related programs and organizations.

2008 Tanger reveals a development in Irving, Tex., featuring 90 stores in 380,000 square feet. It is the first project announced as part of the Texas Stadium redevelopment area.

• More than 200,000 shoppers attend the Labor Day weekend opening of a center in Washington, Pa., about 20 minutes south of Pittsburgh, with 75 stores.

2009 Steve Tanger assumes the role of president and ceo. Stanley K. Tanger retires but remains chairman of the board.

• The company completes a $23 million renovation project on its Highway 501 mall in Myrtle Beach. In Foley, Ala., it completes a 24-month construction project that adds new architectural details, a 42,000-square-foot expansion area and a 40,000-square-foot Family Fun Park with a carousel, interactive water feature and a children’s play area.

• Steven Tanger is elected to the board of trustees of the International Council of Shopping Centers.

• Construction starts on the center in Mebane, N.C. The $60 million project, the largest commercial retail development in North Carolina that year, creates 1,100 construction and retail jobs for the region and will feature 80 stores, serving the major metropolitan areas of Raleigh-Durham, Chapel Hill and Greensboro-High Point-Winston-Salem. It opens in time for the 2010 holiday shopping season.

2010 Tanger Outlets at the Arches in Deer Park, N.Y., is certified as a Leadership in Energy Efficient Design, or LEED, Silver Core and Shell project by the U.S. Green Building Council.

• Tanger partners with Discovery Communications, TLC and its TV show “What Not to Wear,” an outlet industry first. During the fall 2010 season, Tanger is exclusively featured in an episode of the show filmed at the Deer Park center.

• The firm completes a public offering of $300 million of 6.125 percent senior notes due in 2020 in an underwritten public offering. The net proceeds from the offering, after deducting the underwriting discount and offering expenses, are approximately $295.5 million.

• The company launches a mobile site, giving shoppers access to key information while shopping at Tanger centers, along with notifications of special offers and discounts from the brands at the centers.

2011 Canadian firm RioCan and Tanger sign a letter of intent for a $1 billion joint venture, with the potential to build 10 to 15 Tanger centers in Canada, over a five- to seven-year period.

2012 Tanger opens in the Houston market, in Texas City, Tex., with a fund-raiser for the University of Texas Medical Branch.

• The company reveals plans to build, manage and own a 312,000-square-foot mall at Foxwoods in Mashantucket, Conn., on the Mashantucket Pequot Indian Reservation, in partnership with Gordon Group Holdings.