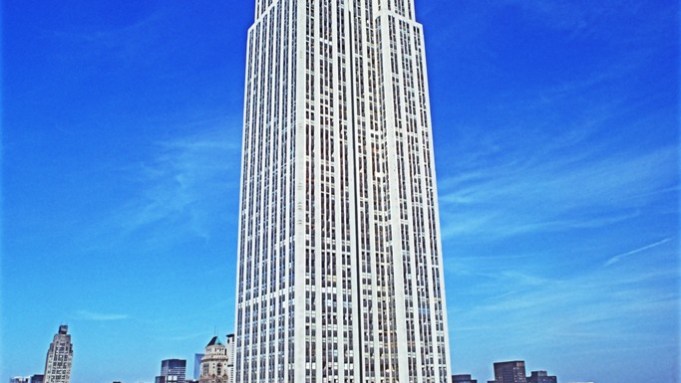 BEIJING — If you happen to be in Manhattan Wednesday evening and are near the Empire State Building, you may notice that sometime between 6 p.m. and 9 p.m. the lights on top of the building will suddenly change to colors of very bright red and gold.

The red and gold lighting is happening, in part, to celebrate Chinese New Year, a weeklong holiday that begins Monday. But even more so, the Empire State Building will change colors in honor of the 300 or so megarich Chinese who will be inside sipping expensive alcohol at a private gala on the building’s 80th floor.

No doubt there are countless increasingly rich Chinese traveling overseas who book tours on cramped buses with packed itineraries in New York and other cities around the world. What makes this group different is who they are, how much they are worth, what they do and, in particular, what they will be doing in the Big Apple from Sunday to Friday.

The tour, called Dragon Week NYC to coincide with the fact that, according to Chinese astrology, 2012 is the Year of the Dragon, is organized by Affinity China, a start-up that bills itself as a “private network offering exclusive luxury lifestyle events and unique travel opportunities” to its Chinese members, who can join the network by invitation only.

Last May, the group organized a trip for 20 Chinese VIPs to stay in a mansion in the Hamptons and sail yachts in Sag Harbor. Fifty of its members were invited to a private cocktail party at the Mandarin Oriental in New York with Chinese tennis star Li Na just before the U.S. Open at the end of August.

Later in the fall, Affinity held an exclusive dinner in Shanghai with an executive from Hermès’ China operations, along with executives from New York and France, who flew over to personally showcase wine and cheese from their companies to the guests.

Among Affinity’s founders are a Taiwanese who is based in Los Angeles but spent the greater part of the last decade or so working in consumer marketing in Mainland China; a Canadian who is co-founder of a private nightclub and medical clinic in Shanghai; an American tech entrepreneur; and a Chinese who is related to a high-ranking former government official. The company requested her identity and the government official to whom she is related not be mentioned.

Affinity is equally secretive about who, exactly, its members are.

According to Christine Lu, the Taiwanese, those who join the club come from “trust networks” the company’s co-founders, investors and business acquaintances have built in China over the years. Members range from entrepreneurs and investors to high-powered executives. Most are worth at least a million, if not tens of millions of dollars, the company said.

“Everyone wants to know who our members are,” said Lu. “Our business model is based on the trust network. I don’t care how much someone pays me for a list. If I break that trust, I have no business.”

Whoever Affinity’s members are, those attending Dragon Week are certainly getting the attention of luxury brands in New York that are hosting a number of private events for the group.

After the week kicks off on Sunday evening with a cocktail party at the apartment of Yue-Sai Kan, an entrepreneur and TV host, Gilles Mendel will give the group a private tour of J.Mendel’s atelier on Monday afternoon, followed by a performance by the internationally renowned pianist Lang Lang at Montblanc’s store on Madison Avenue.

That evening, Piaget will hold a cocktail party at its Fifth Avenue boutique, where it will showcase a new special dragon-themed watch collection.

Tuesday evening will be spent at Bergdorf Goodman, where Linda Fargo, senior vice president of the fashion office and store presentation, will give a special fashion talk followed by a dinner at the store’s restaurant and private shopping hours. Already the store’s windows are decorated with a Chinese New Year theme in preparation for the event.

Ralph Lauren will hold a private event at its Madison Avenue store on Wednesday morning. That afternoon, Estée Lauder will have a reception hosted by Aerin Lauder, the brand’s style and image director, as well as Jane Hertzmark Hudis, global brand president, at its world headquarters. Selected guests will have the opportunity for a behind-the-scenes tour of founder Estée Lauder’s office.

The brand will also have makeup artists on-site at the Mandarin Oriental, where the guests will be staying, to do makeovers before the Empire State Building lighting ceremony that evening.

On Thursday, Coach will have a private event at its store on Madison Avenue.

Some events are only open to those who have signed up for a “black” membership, which costs $100,000. Affinity is limiting the number of such memberships to 88 people (eight is a lucky number in China). An introductory gold membership costs several thousand dollars. The Dragon Week trip itself costs about $13,000.

“This is the first time we have done anything like this with a group of consumers,” said Daniel Annese, Estée Lauder’s senior vice president and global general manager of market development. “We really want to make an impression. We want them to understand the brand more and have a more special connection.”

RELATED STORY: Luxury Players Embrace the Year of the Dragon >>

According to a March 2011 study on China’s tourism industry from the Boston Consulting Group, there is a massive market opportunity with an emerging segment of Mainland travelers the consultancy categorizes as “experienced affluent” Chinese.

Like Affinity’s clients, they are wealthy, have traveled abroad before, tend to be relatively low-key, if not overtly secretive, about their consumption habits and personal backgrounds back home and are specifically looking for memorable experiences when they go overseas.

By 2020, BCG estimates there will be around 100 million travelers in the experienced affluent segment, who will account for roughly one-third of all trips and more than 40 percent of the total value of both the domestic and outbound leisure markets.

At the moment, there are very few companies, whether it be fashion brands or otherwise, catering to this group or that even know how to connect with them in the first place, said Vincent Liu, a BCG partner in Hong Kong.

“The Chinese entrepreneurs, most of them don’t want to be high profile, so you have to have access,” Liu said. “There is obviously this tremendous wealth in China. They want to shake off the image of new wealth and try to become the elites. They want to learn how to shop, how people live, how people eat and drink, how to become a sophisticated wealthy person.

“They cannot find what they need in China,” he added. “There are not a lot of upscale Western travel agencies. They don’t have the right type of tool to spend their money.”

Affinity’s goal, is, in essence, to become that tool, to help connect wealthy Chinese with companies involved in everything from real estate to Ivy League education tours to luxury shopping while at the same time helping such companies reach out to and understand more about this growing demographic of sophisticated rich from the Mainland.

Its founders are adamant that it is not a travel agency but rather a concierge service that helps “internationalize” Chinese. In March, Affinity will launch a new social network-like Web site to more easily connect its members with companies that can cater to the experiences they are seeking abroad. Aside from membership fees, the company earns revenues by taking a percentage of sales generated from any of its clients it connects with companies as well as sponsorships from brands.

“Our model is to be the platform,” Affinity’s Lu said. “The platform is based on the trust network, people in our network who want access to brands and brands that want access to Chinese. We spent the past year and a half building a partnership network, and all of these partnerships will be part of the platform. Then we become the platform that is connecting what the members wants with brands all over the world.”

Lu said Dragon Week is somewhat of an experiment (the company was expecting mostly Mainland Chinese to attend but instead received bookings from a large percentage of second-generation Chinese attending universities on the East Coast); however, the brands participating say they feel confident that their partnership with Affinity will, at the very least, present a new business model for reaching a rapidly growing and evolving segment of rich consumers from China.

“This is part of the platform of how our business model is evolving,” said Jan-Patrick Schmitz, chief executive of Montblanc North America. “I believe it will become a successful business model for marketing to [the Chinese], giving them experiences, building customer relationships.

“The time is shifting for luxury brands. It was about bus loads of people, about quick shopping,” he added. “Now it is evolving into experience-based luxury retailing. It is much more about class than it is about mass.”