The discounter and the specialty chain each offered their own window on the coronavirus shutdown.

Target is one of the few retailers staying open through the coronavirus shutdown.

The scope of just what fashion faces in the coronavirus shutdown is hard to fathom.

But the still-open Target Corp. and the mostly shut-down Gap Inc. both offered updates Thursday that gave the crisis a sobering sense of retail scale.

Meanwhile, the ever-growing unemployment line — with 26 million losing their jobs in the last five weeks — illustrated just how long the road ahead could be. When consumers are able to come back to stores, it’s unclear just what the economic landscape will look like, how many of those jobs will return and whether shoppers will have fashion on their minds.

If Target’s current business is any guide, apparel is still nowhere near a priority.

Even though the discounter is one of the only retail games in town, staying open as consumers stock up on stay-at-home necessities, the company said it was forced to write down the value of its apparel and accessories inventory as sales in the category plummeted more than 40 percent this month. Shoppers instead are stocking up on lower-margin essentials even as costs to operate safely soar.

The situation was even more dire at Gap, which operates its namesake chain as well as Old Navy, Athleta and Banana Republic. A “significant” portion of its global store base is closed and its North American presence has gone dark. The company said it was burning through cash fast, looking to raise additional funds and bracing for a potentially bruising battle with landlords.

Gap said Thursday that it suspended rent payments on its North American stores and on “a significant” number of overseas units, resulting in $115 million in savings a month. It is negotiating deferrals and abatements with landlords, as well as modifications and terminations of leases in certain locations.

“If we are unable to renegotiate the leases and continue to suspend rent payments, the landlords under a majority of the leases for our stores in the United States could allege that we are in default under the leases and attempt to terminate our lease and accelerate our future rents due thereunder,” Gap said in a Securities and Exchange Commission filing.

“Although we believe that strong legal grounds exist to support our claim that we are not obligated to pay rent for the stores that have been closed because of the governmental and public health authority orders, mandates, guidelines and recommendations, there can be no assurance that such arguments will succeed and any dispute under these leases may result in litigation with the respective landlord, and any such dispute could be costly and have an uncertain outcome,” the retailer said.

Gap started out its fiscal year in February with $1.7 billion in cash, cash equivalents and short-term investments, but has burned through more than half of that during the lockdown period and now expects to end the first quarter with $750 million to $850 million on hand.

The firm has already taken steps to try to shore up its books, drawing down its entire $500 million revolving credit loan; suspended dividends and stock purchases; reduced planned capital expenditures by about $300 million for the year, furloughed the majority of its store teams in the U.S. and Canada and more.

And more actions are expected due to liquidity issues. “We expect that the additional actions to preserve and improve our cash position during the pandemic will include some combination of new debt financing or other short-term credit facility and further deferring capital expenditures, further reducing headcount, further reducing operating expenses, further reducing receipts and orders for merchandise, and extending the terms for payment of goods and services,” the company said.

In a sign of just how far retail stocks have fallen — and how low expectations are — shares of Gap slipped just 1 cent to $7.10 on Thursday despite the bleak warning, leaving the firm with a market capitalization of $2.6 billion. After the market closed, Gap priced bond offerings that would raise a total of $2.25 billion and close on May 7 in tandem with adjustments to the company’s credit facility. 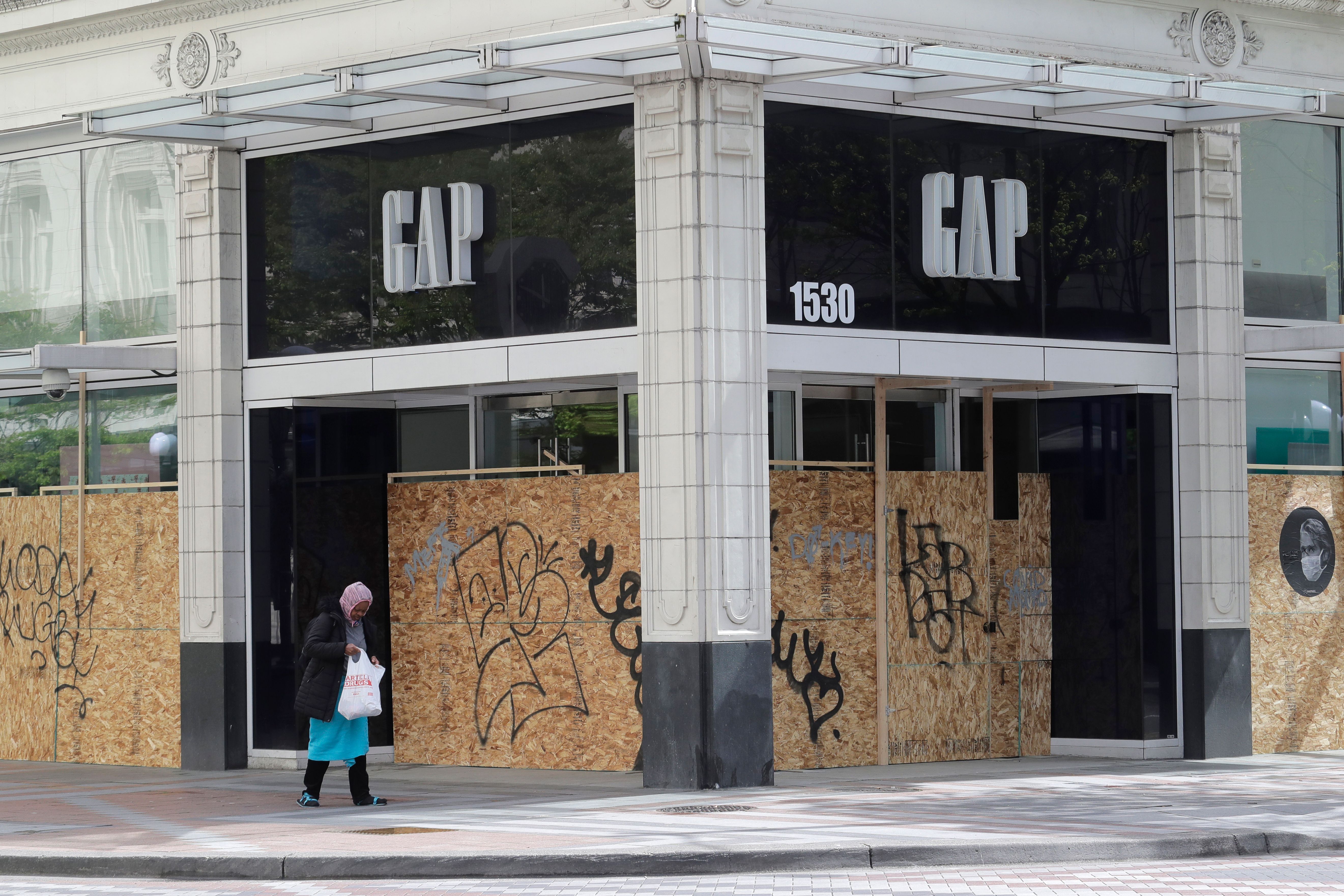 Gap is among the many retailers with stores that have gone dark.  Ted S Warren/AP/Shutterstock

For Gap and other retailers that don’t sell diapers and canned tuna, the biggest X factor in the equation for retail survival could be just how the retail market will open back up.

Recent Wells Fargo research showed that while all states could restart by May or June, “the pace of the recovery could vary greatly and is likely to depend on the actual COVID-19 health burden, population density, ongoing testing/containment strategies, the efficacy of therapeutics, and the ultimate availability of a vaccine.”

The bank’s research breaks U.S. states into four groups by COVID-19 deaths per million — from zero in Idaho or Montana to 31.2 in New York and 40.8 in New Jersey.

The 26 states with lower death rates — including Texas and Washington — represent a third of U.S. GDP and could fully restart between now and summer, according to the estimates. The next 12 states, including Pennsylvania, Florida and California, represent another one-third of GDP and could attempt a full restart over the fall. The rest of the country, covering states in the Northeast as well as Michigan, Louisiana and Maryland, may not fully restart until sometime in the first half of next year.

Ike Boruchow, a retail equity analyst at the bank, noted that “restarting is different from recovering economically, but the timing and pace of state-level re-starts should still play a key role in the earning cadence of the companies we follow.”

Of the retailers tracked by Boruchow, Boot Barn Holdings was “the clear winner,” he said, and “the only company with more than 60 percent of its store fleet in states that fall in quartiles 1 and 2 [which are predicted to restart by summer]. That said, Boot Barn has about one-third of its stores in markets exposed to the energy/commodities sector and the declining oil prices will likely continue to be a headwind.” Offpricer Ross Stores Inc. also has more than 40 percent of its stores in those states.

The companies most exposed to the states set to stay closed longer are the offprice leader TJX Cos. Inc. and Urban Outfitters Inc.

“However, we would note each has potential to cushion the headwind as TJX has about 30 percent of its doors outside the U.S. (Canada, Europe and Australia), while Urban Outfitters has one of the highest e-commerce penetrations in the industry at 40 to 45 percent,” Boruchow said.

While just when and how social distancing rules are relaxed remains an open question, Target can expect to press on and is navigating the issue of how to operate safely now.

Brian Cornell, chairman and chief executive officer, said Target’s improved wages and benefits would be extended through May 30. The retailer is paying workers an extra $2 an hour and also providing backup care for employees and a 30-day paid leave for employees who are 65 or older, pregnant or who have underlying medical conditions.

This all comes on top of the $300 million Target has already put into wages, bonuses, paid leave and benefits for its frontline team members.

“We have deep gratitude for the remarkable effort our team has put into supporting guests across the country,” Cornell said. “We remain committed to prioritizing our efforts to provide for their well-being so they can take care of themselves and their families during this unprecedented time.”

Seth Sigman, a stock analyst at Credit Suisse, said the spending would ultimately help Target build its business, even if it is currently weighing on the bottom line.

“We view the current margin pressure as an investment, one that is driving new customer acquisition, market share gains, and serving the customer during a time of need,” Sigman said. “We get the negative argument here — best of sales with declining profitability. Yet, the payback will be significant over time.”

Target’s sales results over the past couple months show just where the consumer is now.

So far in the first quarter, the retailer’s comparable sales are up more than 7 percent, with a slight decline at stores and better than 100 percent growth online. The essentials and food and beverage category comped up by more than 20 percent, but apparel and accessories declined by over 20 percent.

For March, comps in essentials and food and beverage increased 40 percent, while apparel and accessories fell by more than 30 percent.

Trends in early April were similar to late March, but started to improve after midmonth. So far this month, Target’s comps increased more than 5 percent, with web sales up over 275 percent and apparel and accessories down more than 40 percent.

Investors reset their Target expectations modestly and traded shares of the firm down 2.8 percent to $103.86, leaving it with a market capitalization of $52 billion.