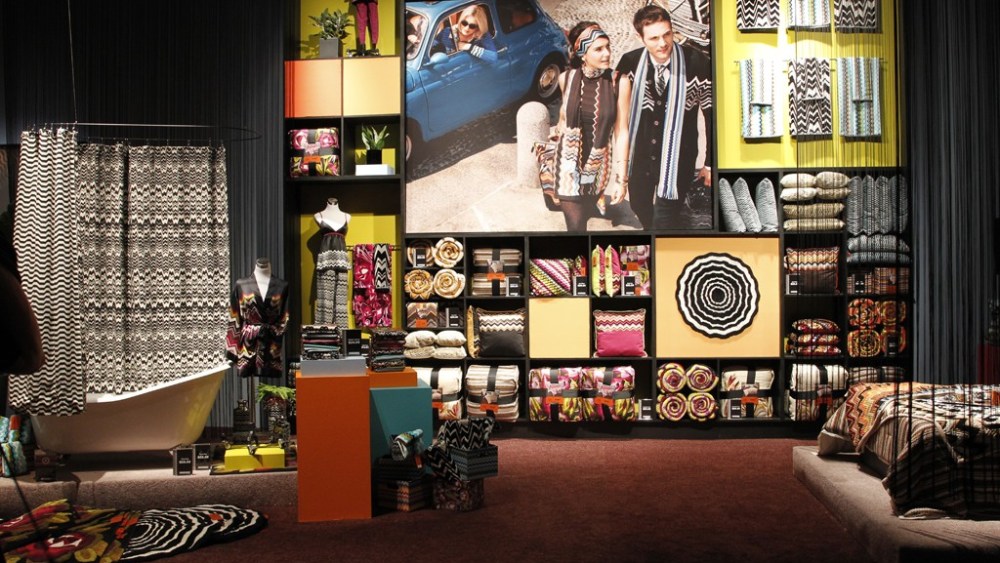 NEW YORK — Target today unveils its Missoni for Target pop-up shop at 1095 Sixth Avenue here, and expects the line to be its most successful yet.

The collection hits Target stores and target.com on Sept. 13.

Anticipating a rush on colorful striped bedding, black-and-white zigzag glasses and knit apparel in rich colorways, Target ordered twice the amount of merchandise it had on hand for the Liberty of London + Target pop-up store that occupied the same space in March 2010.

Target is expecting Missoni to surpass the Liberty collection. For one thing, the Missoni collection is bigger, with 400 items compared with Liberty’s 300. So profuse is the Missoni for Target collection that the retailer leased the building’s second floor for selling bed and bath products and children’s wear. Missoni for Target occupies 8,000 square feet of space in the building at the corner of 42nd Street. That’s almost one-third more square footage than the Liberty event.

“I arrived in New York an hour ago,” said 28-year-old Margherita Maccapani Missoni. “This is the first time I’m seeing all the pieces together. It has a different impact.” Maccapani Missoni and her mother, Angela Missoni, who is creative director, will be on hand at the opening tonight during Fashion’s Night Out.

“This is not a copy of any other collection,” said Angela Missoni. “It’s a collection unto itself. We really made it our own Sixties-inspired story.”

Enormous lampshades with signature Missoni patterns hang from the ceiling of the pop-up store and black string creates a sheer wall between the store and dressing rooms. Target bull’s-eyes, in classic Missoni palettes, are projected onto the rug. Target’s highest price point for a product in a designer collaboration is Missoni’s patio set at $599.99; however, most items are priced under $40.

“Target’s marketing approach is on a whole other level,” Maccapani Missoni said. “This viral way of attacking the audience” is amazing.

Maccapani Missoni was referring to the Missoni for Target blog on the retailer’s Web site and the blogger, Marina, dubbed, “a little doll.” Marina’s voice is actually courtesy of fashion journalist Indigo Clarke, and the little doll is actually a 25-foot robo doll dressed in head-to-toe Missoni. The blog advises that Marina is “a real doll. That’s right, joints, hinges and all.”

Target Corp.’s design and marketing teams traveled to Italy several times to work with the Missonis, who made reciprocal visits to the retailer’s Minneapolis headquarters. Maccapani Missoni appears in the ad campaign, a takeoff of Sixties caper movies.

“This is the first time [Margherita’s] been so involved in a project,” said Angela. “Two years ago [after working as a model and actress,] she told me, ‘I don’t have to prove anything to myself. This company is my heart.’ I think she has all the potential to run the company one day.”

Asked whether the fashion house’s founders, Angela’s parents Tai and Rosita Missoni, were wary of a Target hookup, Angela Missoni said, “My parents are the most hip, advanced people. They’ve always been ahead of their time.”

And why partner with Target in the first place? “Besides the fun of it? To raise brand awareness in the U.S.,” Angela said. “We are a big name with a small presence in this country.”