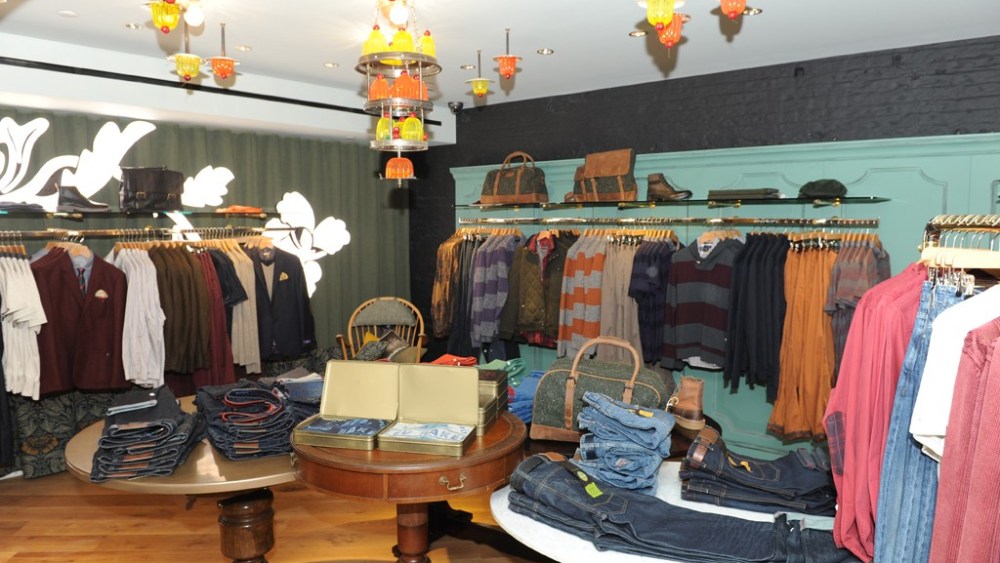 NEW YORK — Ted has taken up residence on Fifth Avenue.

Quirky British brand Ted Baker London on Thursday will open a three-story, 7,000-square-foot flagship at 595 Fifth Avenue at 48th Street in Midtown Manhattan. The store, which is the brand’s largest unit in the U.S., has been designed to replicate a traditional London townhouse of the Twenties. It features Art Deco design details including an elaborate metal staircase with messages written on the steps and bespoke printed wallpaper, along with exposed brick walls, a three-story glass chandelier and an elaborate digital window installation that includes a huge clock with pendulums and moving cogs and a screen that will display movies, photos and animation.

“This is quite a big thing for us,” said Ray Kelvin, founder and chief executive officer. “I started this business in my kitchen 25 years ago and to now have a store on Fifth Avenue is unbelievable. [It] puts us in the heart of one of the world’s premier shopping districts. The location will give those new to the brand a healthy dose of the retail theater and rich detailing that we have become known for, and our regulars the sense of place that they have become accustomed to with Ted.”

The Fifth Avenue flagship marks the 18th store for the brand in America and its third in Manhattan, following the Meatpacking District and SoHo. Each store is unique and designed to fit into the neighborhood in which it is located.

This store brings to life the company’s interpretation of “Ted’s Grand House.” Shoppers enter the grand hall where men’s and women’s apparel and accessories share the space. Vintage-looking portraits with a twist hang from the walls and include images of women with moustaches or tea cakes on their heads and a young child with a Mohawk.

“It’s not just a shop fit,” Kelvin said. “It’s a home. We want people to come in and feel comfortable.”

Men’s wear has its own home on the lower level in a space designed to mimic a scullery, complete with dozens of butler’s bells on the walls, pots and pans at the bottom of display racks, upside down jelly molds hanging from the ceiling and a silver service at the cash wrap. The store is opening with the company’s fall collection of tailored clothing and sportswear in heritage fabrics that recall the great English outdoors.

The women’s department is upstairs and is reminiscent of a lady’s boudoir with fans on the walls and a cash wrap that looks like a vanity table. Fitting rooms feature floor to ceiling velvet curtains. The fall women’s collection features a “town meets country” theme and includes everything from the Working Title tailored pieces to eveningwear.

Although Ted Baker has a strong men’s business, Kelvin expects women’s merchandise to account for about 60 percent of sales at the store. “But both will perform admirably,” he said. “There are more women walking by, but the men’s wear is breathtaking.”

Kelvin declined to provide a volume projection for the store, but said it is expected to be profitable. “It was a big investment,” he said. “But we have a plan that is achievable.” He said the company is “not big enough” to support a showcase store that doesn’t carry its weight. “If it doesn’t deliver, it will have a material effect on the company,” he said.

Faith Hope Consolo, chairman of the Retail Group of Prudential Douglas Elliman, estimated the rent for that location would be between $4 million and $5 million a year, and “to make a profit, the benchmark is 10 times the rent.”

Kelvin said opening on Fifth Avenue “sets a global scene” for the brand and positions it “on a world stage. We never advertise, and our p.r. is very controlled, but the footfall here is incredible. It’s not just America, it’s the world.”

For the opening weekend, 30 maids and butlers will walk the streets of Midtown handing out keys to Ted’s home and helping passersby by shining their shoes, hailing cabs and using feather dusters on their packages.

Ted Baker has more than 300 locations on five continents and recently opened stores in Singapore and Hong Kong. Additional units will be added in Toronto, Beijing, Shanghai and Kuwait by the end of the year.