Texas May Be Lone Star in Southwest

Bouyed by energy companies, Texas might emerge as a holiday retail beacon in the Southwest. 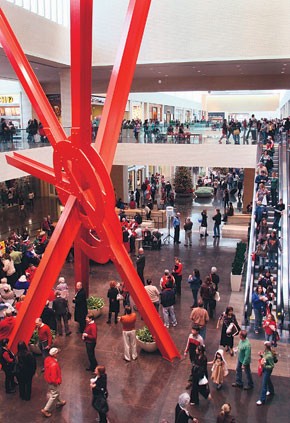 Bouyed by energy companies, Texas might emerge as a holiday retail beacon in the Southwest.

Although not immune from the fuel, home market and tight credit challenges facing the rest of the U.S., the Lone Star State’s multifaceted economy and its position as the nation’s capital of oil production, refining and equipment give it a layer of economic stability.

“For Christmas, I have to say things look better in Texas,” said Ed Friedman, senior economist at Moody’s Economy.com. “Texas is doing much better than the rest of the nation because it has such a diverse economy and because each sector in that economy has strong growth drivers.”

Neighboring Oklahoma, however, has not fared as well, especially in the aftermath of the devastating ice storm this month that disrupted businesses, transportation and schools.

Retailers from San Antonio to Little Rock, Ark., particularly in the moderate range, are trying to give customers value and are closely monitoring inventory.

In the mid-range, retailers and shoppers are hungry for high perceived value, said Roseanne Saginaw, a veteran sales representative with a namesake showroom of handbags at the Dallas Market Center. Colorful textured handbags by Big Buddha that retail around $85 are selling briskly.

“They want something cute but not super expensive,” Saginaw noted. “I think the market is shifting, frankly. Maybe it is tired of $400 and $500 bags.”

And Crawford Brock, owner of Stanley Korshak, the Dallas luxury emporium, conceded that, “It’s a challenging environment right now….My business has been OK, not great.”

Brock slashed his inventory in 2007 by $8 million — a 21 percent decrease — in a bid to increase turn and profits. Areas of strength are designer handbags and jewelry such as diamond hoops, embellished gold bangles and classic pearls.

Friedman said Dallas is benefiting from commercial, industrial and retail development, and San Antonio has gotten a boost from $2.1 billion in new construction at the Army’s Fort Sam Houston.

Texas’ jobless rate was a seasonably adjusted 3.9 percent in October, one of the lowest levels since 1976.

Still, macroeconomic pressures will take some toll, said Bud Weinstein, director of the Center for Economic Development and Research at the University of North Texas.

“Our unemployment rate in North Texas and the entire state is low and job growth has been pretty strong so there are lots of positives,” he said. “But there is so much uncertainty about the direction of the national and local economy that consumers are going to be a little more cautious.”

Cheryl Bridges, director of the Center for Retail Studies at Texas A&M University, said she foresees a 3 to 4 percent holiday gain for Texas, compared with a 2 to 3 percent increase nationwide.

Henry S. Miller 3rd, co-owner of shopping centers such as Highland Park Village, Preston Royal Shopping Center and West Village in Dallas and 2nd Street District in Austin, said, “We’ve seen stronger sales than ever in luxury brands, but the middle price range doesn’t seem to be holding up quite as well.”

Department stores in Dallas, including Macy’s, J.C. Penney and even Neiman Marcus, have mimicked the nationwide trend of intensified sales and promotions.

Executives at Dallas’ two biggest malls, Galleria Dallas and NorthPark Center, said holiday sales — with a boost from promotions — have been better than average.

NorthPark has been “trending about 9 to 10 percent ahead of last year,” said Christine Szalay, marketing director.

Galleria Dallas is up about 8 percent this month, with strong activity in electronics, fine jewelry, shoes, designer accessories, juniors and cosmetics.

“Sales are on target to be much higher than in previous years,” said Peggy Weaver, general manager.

“The only thing I’ve noticed is some price resistance at the very top,” said Mickey Rosmarin, owner of Tootsies contemporary stores in Houston, Dallas and Atlanta.

Fashion is having its day at Adelante, a moderate to contemporary store in San Antonio, where value is key. Sales rocketed 46 percent in November and are up 25 percent for the year, said owner Marla Ross. Bestsellers include Cicciabella embroidered fleece slippers for $50 to $70, dresses and tops by Ella Moss and JW LA for around $110, iT jeans for about $70 and whimsical Christmas ornaments from $5 to $20.

“I am very much about the most fashion for the dollar that you can get,” Ross said.

In Arkansas, which has a diverse, stable economy, consumers have had relatively little exposure to the subprime lending crisis, noted Gregory Hamilton, director of economic research at the University of Arkansas, Little Rock.

“The economy is slowing, but the gross state product won’t go negative,” he said.

“Our customer is not affected as much as the middle class,” Bailey said.

Many independent stores are fretting about inventory levels, however, said a sales rep who travels the Southwest with better lines.

“Business is tough,” said the rep, who asked not to be identified. “They’ve all got a bunch of stock and they’re waiting to see how good Christmas is. With gas prices, the stock market going down and this real estate mess with people losing their houses, they are suffering.”

Oklahoma was holding its own until the ice storm that cut power to one million people and businesses for days and crippled transportation.

The surge in energy employment has been making up for a loss of manufacturing jobs, and its affordable housing has had little subprime or speculative activity, noted Aaron Smith, senior economist with Moody’s Economy.com.

“I think Oklahoma will do better than the national average,” he said.

Business was solid at Balliet’s in Oklahoma City before the storm, said owner Bob Benham. “We were off to a fabulous start. Post-Thanksgiving business was really strong. I thought we would make up ground…and have a good year, and Mother Nature said, ‘I’m going to kick your ass again.'”