An ambitious, more than 1.4 million-square-foot mixed-use project is planned here with a favorite Texas motif as the calling card — sports. 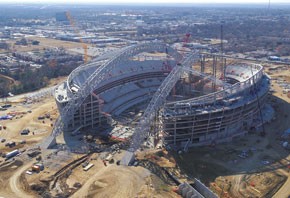 ARLINGTON, Tex. — An ambitious, more than 1.4 million-square-foot mixed-use project is planned here with a favorite Texas motif as the calling card — sports.

Glorypark is a $742 million complex across the street from the Texas Rangers’ Ballpark at Arlington and a half-mile from the new $1.1 billion home of the Dallas Cowboys, who plan to play football there next year.

The project — construction is to get under way in the next several months — reflects a trend in Texas toward themed mixed-use developments made possible by the abundance of open land, said Brian Berry, dean of the School of Economic, Political and Policy Sciences at the University of Texas in Dallas.

“The real issue is whether this kind of development [Glorypark] in this location with these neighbors will fly,” said Berry, noting that it may be 15 years until the success of the project can be fully measured. “I think over the long run it will lead to fairly significant additional rounds of development.”

Arlington, located in the middle of the sprawling Dallas-Fort Worth metroplex, is the nation’s 49th largest city with about 363,000 people, but it is suburban in character, with a small downtown and mostly government buildings. The area around Glorypark and the two stadiums is industrial.

The Arlington demographic is young — more than half the residents are 18 to 44 years old — and the median household income of $47,498 ranks slightly below the national figure of $48,451, according to the U.S. Census Bureau.

Glorypark is on 75 acres and is expected to open in phases beginning in March 2010. The plans call for 825,000 square feet of retail space, restaurants, entertainment, apartments, offices and hotels, including a 180,000-square-foot department store, 200,000 square feet of offices, 332 rental apartments and two Starwood hotels, a 300-room Westin and a 135-room Aloft, valued at a total of $232 million.

The hotels are targeted to be open when Cowboys Stadium is the site of the Super Bowl in 2011. A third hotel also is on the drawing board.

Glorypark is the vision of Tom Hicks, a Dallas billionaire who owns the Rangers and always intended to develop the land around the nostalgia-themed ballpark, said Casey Shilts, executive vice president of Hicks’ private investment company, Hicks Holdings LLC, and chief operating officer of the Hicks Sports Group division.

Glorypark has some similarities to Victory Park, the $3 billion complex adjacent to downtown Dallas that Hicks codeveloped and which also has been opening in phases. Like Glorypark, Victory has a huge arena, American Airlines Center, which houses one of Hicks’ teams, the Stars, as well as the NBA’s Dallas Mavericks. But because of its suburban location, Glorypark is more oriented toward retail and entertainment than offices and residences.

“We think real estate development around professional sports venues or entertainment venues makes a lot of sense,” Shilts said. “It provides something for everyone. The female head of household can shop while the kids attend a sporting event. Before and after games, people want something to do.”

However, the national economic downturn is causing some retailers to reevaluate expansion, said Herb Weitzman, chairman and chief executive officer of The Weitzman Group, a retail broker and developer based in Dallas.

“With lifestyle projects that are more suburban, the jury is certainly out,” Weitzman said. “Whether they will continue to draw the amount of traffic into the inner mall, time will tell. With Glorypark, the immediate area is industrial, and the area surrounding it is pretty low-income.”

Hicks’ co-developer on Glorypark is Steiner + Associates of Columbus, Ohio, which is handling the retail and entertainment components.

Yaromir Steiner, founder and ceo, said the stadiums will be “the icing” on the project and a challenge, as well, because of the car traffic generated on game days.

“We need to preserve our ability for people to shop in the project in the middle of a game that attracts 100,000 people,” he said. “Frankly, at the beginning of Glorypark, we discounted the sports and other venues and said, ‘If we had to develop a retail project here, would that make sense?'”

Although the sports teams give Glorypark an identity, they weren’t the main impetus for the retail development, said Barry Rosenberg, president of Steiner.

“The location is in the dead center of the Dallas-Fort Worth market, and it has the best east-west and north-south connection at the intersection of [Interstate Highway] 30 and [State Highway] 360,” Rosenberg said.

The federal and state governments are spending an estimated $800 million to build and improve roads around the stadiums.

The industrial character of the land within a three-mile radius of Glorypark doesn’t necessarily seem like a first option for a shopping district targeting the upper middle class, but that doesn’t worry Yaromir Steiner.

The project reminds him of his hometown development, Easton Town Center, which opened in 1999 “on the weaker side of Columbus” at a site selected for its road access. The mixed-use project quickly expanded and now has more than 130 better fashion and home stores.

“The main reason Easton has been so successful has always been its connection to regional roads and freeways,” Steiner said. “If you could do it in Columbus without the Cowboys and the Rangers and Six Flags, this project makes sense.”

Rosenberg said 35 percent of Glorypark’s retail space has been leased, but the only tenant announced so far is IPic Entertainment, a concept that combines an eight-screen luxury movie theater with a restaurant, bar, bowling alley and event space totaling 68,000 square feet. IPic will be on a plaza dubbed Rangers Alley directly across the street from the ballpark. The alley will have a public space and stage for events and a huge screen on which to view baseball games.

Rosenberg said the mix will be similar to Easton, which has better home and fashion tenants including Anthropologie, Apple, Nordstrom, Lacoste, Lucky Brand and Pottery Barn.

“We’re creating an urban center in a suburban area,” Rosenberg said. “If you’ve been to downtown Arlington, there is not much of one. This creates a social gathering place where a lot of things occur — arts festivals, jazz festivals. We’re creating a place where people want to spend their leisure time.”

“Glorypark has an urban authenticity that can begin to develop a culture that our community really doesn’t have,” he said. “It will be very significant. It will provide unique retail to our community, and when you put that with the sports facilities, it creates an environment that is unlike anywhere in the country. For a certain number of days a year it is in some ways a national draw.”

However, Yelverton said some critics assailed the use of public funds for private development. The city is putting $135 million into Glorypark through bonds and tax increment financing districts. The money will build four parking garages and provide infrastructure for water, sewage and streets. The city is also contributing $325 million to Cowboys Stadium.

The Cowboys, which Forbes magazine last year ranked as the most valuable franchise in sports, at $1.5 billion, play only 10 home games a season, including two preseason contests. But the stadium will likely accommodate 25 to 40 other ticketed events, such as concerts. The ballpark holds 80 games a year.

Most of the retail at Glorypark will be in the so-called Warehouse District, an atrium-enclosed simulated street with two levels of retail topped by offices and apartments on the third and fourth stories.

The city’s largest retail properties are currently a midtier mall, the Parks at Arlington, and Arlington Highlands, a $200 million open-air retail and office center developed last year by The Retail Connection, a Dallas consulting firm.

“Business is excellent,” Lieberman said. A $60 million expansion will add 160,000 square feet this fall. When complete, Lieberman expects the center to generate $300 million in annual sales.

“Arlington is a deep market,” he said. “People lose sight of how big it is due to its being sandwiched between Dallas and Fort Worth. Glorypark further reinforces Arlington’s status as one of the strongest super-regional entertainment and retail hubs in the metroplex.”