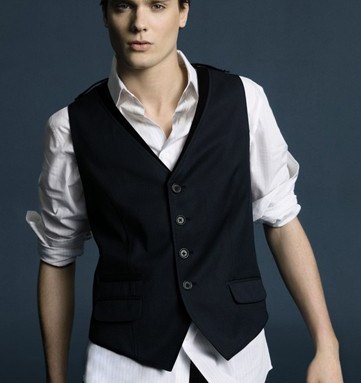 Men are embracing fashion, and Macy’s is reaping the benefits.

“Men’s is doing a little better than the total business,” reveals Stuart Goldblatt, senior vice president and general merchandise manager of men’s for Macy’s Merchandising Group. “We attribute it to a reawakening of the men’s business.”

Goldblatt says men’s wear has come “out of its casual cycle, when there were khakis everywhere,” and the customer is now open to trying new things. “He needs more tailored looks. He wants to look different from his work to his casual to his weekend wardrobe.” Additionally, “Casual is becoming more dressy, and dressy is becoming more casual,” prompting men to bolster their wardrobes.

And therein lies the opportunity for the retailer. Although Goldblatt acknowledges that “it’s a very tough and competitive environment out there” with myriad pressures on consumers’ wallets, “if they are buying, we want them to buy at Macy’s.”

Goldblatt characterizes Macy’s men’s business as “very big and profitable.” He declines to cite a percentage figure but most department stores’ men’s businesses are around 20 percent of total volume. With Macy’s ringing in $26.3 billion in total sales last year, that would put men’s wear sales around $5.26 billion.

To boost that number, the department store chain has identified three key initiatives it will be pushing this fall. The first centers on Tommy Hilfiger, the brand with which Macy’s signed a deal to be the exclusive department store retailer for men’s and women’s sportswear in the U.S. “We’ve had consistent growth in Tommy in the last two years,” Goldblatt says. “The men’s sportswear already performs very well [and we’re expecting business to rise] with the addition of new shops and product.”

All told, Hilfiger men’s wear will be carried in over 500 doors, Goldblatt says, and more than 200 Tommy Hilfiger shops will be installed. “The rest will have highlight areas.”

Also on tap is a World of Tommy Hilfiger catalogue that will hammer home the new arrangement with the designer to the Macy’s customer. “The catalogue is really beautiful,” says Jerry Balest, vice president of men’s fashion for MMG. “It’s done as total fashion. All the listings are at the back so there are unobstructed photos of the men’s and women’s wear. It’s a quality piece.”

Balest says the catalogue was shot in New York, mostly in outdoor locales, so the images are “very natural and relate to the lifestyle” of the Hilfiger brand.

A second major men’s wear push centers on contemporary. “There’s a big change happening in fit, and we’re being very aggressive with it,” says Goldblatt. “The customer is responding to more contemporary fits.”

Both in national brands and private label, Macy’s is seeing good results with a more body-conscious silhouette and will increase the offerings for fall.

On the private brand front, both INC International Concepts and Alfani Red are already offering slimmer cuts, and customers are embracing the looks. “They’re doing very well, and we believe they will continue to grow dramatically,” Goldblatt says.

In national brands, labels ranging from Polo and Calvin Klein to Kenneth Cole are jumping on the trend. “Every brand is coming out with a more fitted silhouette,” Goldblatt says.

“Everybody is reevaluating specs,” adds Balest.

In addition to suits, slim fits are gaining ground in dress shirts, the executives say. “They’re not body-tight shirts, but they’re not the traditional boxy cut, either,” Balest explains.

To help the customer understand the new silhouettes and how they should be worn, Macy’s has installed in-store visuals and fixtures “to pull it all together,” Balest says.

“There’s a key interest in fashion, from a fourpocket jacket to a cardigan,” he adds. “And we will really play with color, such as violet and purple for September. We’ll have strong messages throughout the stores.”

Goldblatt stressed that although these initiatives are designed to draw a new customer into the fold, Macy’s is being careful not to alienate its longtime shoppers.

“This is a reallocation of some of our assets [in a move to] engage new customers,” he says, “but we don’t believe it’s a zero-sum game. To gain new customers, you don’t have to toss aside your existing customers. We will still be a major dress shirt, neckwear and clothing force in the market. We’ll still buy lots of Geoffrey Beene dress shirts and neckwear. We’re not trading off.”

Other top brands for the traditional customer include Nautica, Levi’s, Donald Trump Signature, Gold Toe and Jockey, but Macy’s is also upping the quotient of “more advanced assortment” such as Emporio Armani and Calvin Klein.

“The customer is telling us they like coming to Macy’s for the great values and the lines that are not found elsewhere,” Goldblatt says.

That will be reinforced by the company’s new localization strategy, My Macy’s, which is designed to tweak the assortments by unit. “We’ll be getting local intelligence of sizing, flow and hot ideas,” Goldblatt says. Although the “general assortment is still pretty consistent,” there will be differences such as a focus on local sports teams or vendors popular in a particular region. Climatic changes and size requirements are also addressed, allowing outerwear to be brought in earlier in areas where it gets cold quicker, or XXLs to be added to stores that attract the big and tall shopper.

“That’s the biggest benefit of My Macy’s,” Goldblatt says, “helping to define the assortment to be more color-, size- and category-specific.” All told, 694 of Macy’s 800-plus stores carry men’s wear and there are some units that are men’s only (Union Square in San Francisco) or carry men’s and home.

Goldblatt says that across the board, “even in a difficult environment, fashion is selling. We’ve got a broad customer base, from young men’s to surf to skate to contemporary denim. For the traditional customer, we’ve got Polo and Nautica and the contemporary shopper has Calvin Klein or INC. It broadens our appeal.”