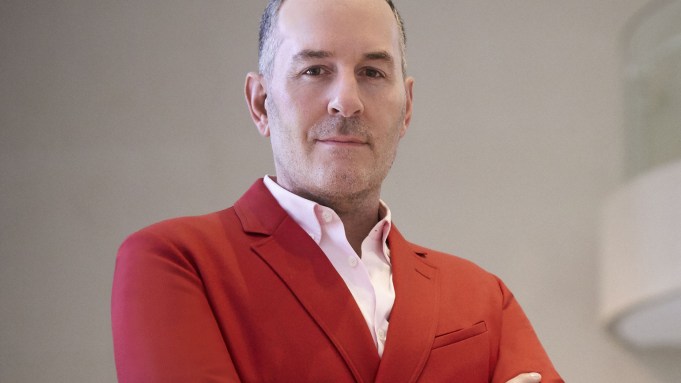 The Conservatory on Two at Highland Park Village in Dallas is blooming.

He’s opening a floral department, going back to his roots as a florist at Highland Park Village in the mid-’90s, and a restaurant, Teak Tearoom, serving “The Brian Bowl” chopped salad; tortilla soup; cocktails named after prominent Dallas women, and more.

“Experiential retail is what I’m passionate about…we have an incredible fragrance specialist who does master classes, we’ll have flowers, we’ll have a place for women to meet every Friday to have a salad and a glass of wine and complain about their husbands. Or if you want, you can just come in and visit Elizabeth the English bulldog,” he said of the store’s mascot.

Through the pandemic, The Conservatory on Two has notched $2,000 in sales a square foot, justifying the larger second floor space with an open floor plan, three curtain glass walls and a verdant view of the treetops.

“In a typical shopping center storefront, there is a front door, and two windows, and a customer can take it all in and see if they want to shop. This new space unfolds as you go along — you have to take the journey to understand what’s in it. If people are going to take the time out to go to a physical store, you have to give them something they can’t get from the couch on mobile. That was why The Conservatory was started in the first place,” he said, in his pitch for brick-and-mortar.

“When I left Forty Five Ten in 2017, I loved shopping, and when I started doing it online, I was so shocked at the poor choices I made. I’m a pro and I’m returning all these garments, it felt like a waste….We do the hard work of the edit,” said Bolke, who has clearly spent a lot of time thinking about how specialty retail can compete.

The edit philosophy goes for online, too.

This week, Bolke is relaunching The Conservatory website with a curated approach, featuring 96 of the most-loved items from the Dallas store and navigation that mirrors the physical space.

“We’re hoping of-the-moment curation and selection will speak differently to customers, because we’re never going to compete with Net-a-porter, saks.com or Matches, you can’t. That’s why Amazon Luxury is important, because if we want to be in front of that customer, you might as well go where you get the most of them.”

The Conservatory is the only multibrand store on Amazon Luxury Stores where it sells a small selection of apothecary items by Royal Fern, Costa Brazil and other niche brands.

“We will be adding more,” Bolke said, not dismissing the idea that could include clothing and accessories. “When you see the way we assort beauty and show beauty in store, it is different, it’s our most booming growth business. But I love the accessibility of Amazon, it’s a gateway to a different client.

“As you can tell from the boom online whether it’s SSense, Fwrd, Matches or, soon, Farfetch via Violet Grey, and at mass at Kohl’s and Target, beauty is everywhere, and people will go to an authentic place that speaks to them.…Where we shine is discovery, and our trademarked term ‘considered luxury’ is a point of difference on Amazon,” he said, explaining that he stocks brands with a sustainable, organic or social mission element.

“Amazon Luxury is about Amazon search. But then when they come to us, they may also learn something they don’t know or about Royal Fern. Luxury stores is also a walled garden that lives apart from the marketplace, and I don’t think that’s commonly understood. You are shopping with a multibrand or you’re shopping directly with that brand. It’s the one portion of Amazon insulated from the marketplace.”

Bolke acknowledges he’s made mistakes with The Conservatory, some of them to do with tech. “Originally, we wanted to be more of a showroom concept, and it worked for a local clientele but not tourist customer who wanted immediate satisfaction, and I learned the sharing of data was not so easy. That’s also why people trust Amazon. Once you enter that ecosystem, you trust them.”

Although The Conservatory store in Napa Valley has closed, Bolke has recommitted to Hudson Yards in Manhattan, in a space trimmed down to 3,000 square feet feet from 6,900 square feet and relocated next to Tiffany & Co. on the first floor.

“I ended up realizing when we reopened in September 2021, we really started to connect with the locals who live in Midtown west. Hudson Yards opened to a lot of fanfare but it was populated by tourists, which is not who we were expecting. The tourists sort of kept the locals away, and the locals now are all working from home, and looking for a place to walk around. Whole Foods opening across the street changed the whole neighborhood dynamic. So I made the decision instead of exiting to relocate, allowing us to retain that customer we’d been nurturing in a newly configured space.”

The Conservatory stores are unique in that they do not have a markdown cycle. “When the customer knows it’s not going on sale there is no hesitancy. It means we have to assort in a different way, but buying and marking down, and making the customer feel bad for not buying something 40 percent off, it felt catastrophic,” he said.

So what about that lowly cashmere sweater sitting on the rack in Dallas in July?

“Somebody somewhere is cold — or going to Aspen. And I don’t think the cashmere sweater I show you this fall is irrelevant next fall, it shouldn’t matter. Most of the brands we work with are in their own d-to-c businesses, and they want us to have the best assortment for that time,” he said, also noting the power of Dallas’ personal shopper community to find a home for most anything.

The new Highland Park store will open not with pre-spring, but with a Winter Garden theme fitting for February, when an ice storm is set to hit Dallas this weekend. “It will feel seasonal,” Bolke said. “This idea of the right product at the right time is more important than worrying about lowly cashmere sweater.”

The pandemic has been good for Dallas, and Texas as a whole, the retailer said, with people moving from New York and Los Angeles (and enjoying the tax breaks, no doubt).

“Seeing the migration is super exciting for the city, it’s added a level of diversity to Dallas that’s eye opening,” Bolke said. “But Dallas has always been a big retail city, the birthplace of Neiman Marcus and a hub of luxury. In the ’80s, we had a similar boom as what you are seeing now in the quality and quantity of multibrand retail, I could probably name 10 of them. And now there is a lot of interest for pop-ups, activations for online players, for brands being here. It’s a big competitive market, and what I love is it’s allowed us to have a specific view and stick there. You don’t have to be everything to everyone.”