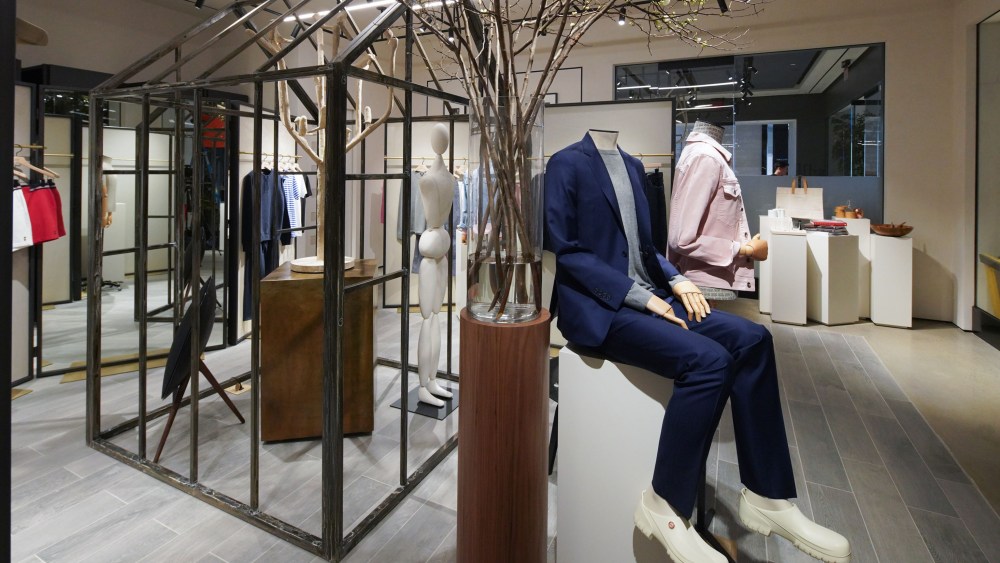 NEW YORK — Brian Bolke in 2014 sold Forty Five Ten, the specialty store he cofounded in 2000, to Headington Cos., staying on as president until August 2017, when he launched an independent consulting company. It turns out, Bolke had only one client — himself — and spent the next 18 months formulating his new retail concept. Called The Conservatory, the 6,900-square-foot store is opening Friday at the Shops and Restaurants in Hudson Yards.

Walking out of the The Conservatory on Monday morning, Bolke said, “Follow me. The store has seven entrances. The main entrance is going to be a beautiful nature moment,” a reference to Lewis Miller by UrbanStems, creator of the Flower Flash, and the offering of lush flowers, green plants, succulents and orchids, available for delivery and for sale at the store.

Olive trees and box hedges line the store’s exterior. “We’re going to have massive, black steel awnings with our brass Conservatory logo,” Bolke said. “I know it doesn’t look or feel like anything else at Hudson Yards. It was important to me that it feel like a beautiful specialty store experience.”

Bolke, two years ago, visited Hudson Yards with low expectations. “I thought, the last thing the world needs is another mall,” he said. “I was so blown away by the vision and scope of the project. To me, the Shops is the least fascinating part of the project. I like the way all these massive firms are moving their offices from Wall Street or Midtown. It completely changes the way people work and interact. I also love the idea of coming here to work, and how food and fitness and social are incorporated.”

The Conservatory is the store at the Shops and Restaurants closest to the High Line, L’Oréal’s headquarters, and Abington House and One Hudson Yards, the project’s two residential rental buildings. “I’ve been imagining who this customer would be,” Bolke said. “One of our core values is that we’re age inclusive. The clothes don’t look like they’re specific to any age.”

With 40 percent of sales expected to come from ready-to-wear and accessories; 20 percent, fine jewelry, and 20 percent home and apothecary, Bolke believes The Conservatory will ring up sales of $2,000 a square foot in the first year.

The Conservatory differs from its neighbors in several ways. “We handle inventory in a different way,” Bolke said, noting that one of each look is displayed and every size for each style is stored in discreet black closets on the sales floor. “Having to look through racks and racks for your size feels like a whole lot of work. We’re trying to merchandise and make the customer journey [easy] without beacons and talking mirrors. We’re using iPads only for visibility into inventory.”

Forty Five Ten is opening a 16,000-square-foot store at Hudson Yards as well. “I wasn’t even conscious of Forty Five Ten,” Bolke said. “I’m working with a lot of vendors with whom I have 20-year relationships. I think it’s a different customer.”

In what Bolke called “a retail first partnership” with Farfetch.com, The Conservatory will offer clients access to the 300,000 styles available on the site, but with the personal attention of the store’s in-house advisers or by appointment with the Farfetch private client team.

When consumers pay for an item from The Conservatory, they’ll be transacting directly with the brand they’re purchasing. Bolke said The Conservatory will take a percentage of the sale — how much depends on the product category and whether it’s a direct-to-consumer brand, but overall, he said, “It’s a traditional wholesale-retail relationship.”

“There’s no wall between the retailer and vendor,” Bolke added. “The brands are getting the customer data. One of the reasons for this form of payment is that when I was buying things online [for myself], I found that I was returning most of it. That carbon footprint is massive. This will allow us to focus on what we’re good at, the assortment, presentation and storytelling.”

The Conservatory is also introducing a cashless concept. Consumers create an account at TheConservatoryNYC.com, which is launching on Friday. When a shopper visits the store, he or she can register their email address and password and the entire store will become shoppable through universal cart technology.

The Curriculum, the store’s pop-up shop, will change its theme every three months. Partnerships, sharing and people coming together inform the store’s first Curriculum presentation, said Bolke. The concept is illustrated by furniture from the Herman Miller collection designed by Charles and Ray Eames. “I liked that they were a husband and wife working together,” Bolke said.

Jil Sander’s husband-and-wife design team of Luke and Lucie Meier attracted Bolke to the brand. “I loved the Jil Sander concept of the quintessential minimalist being interpreted in white shirts,” he said. A week’s work of men’s shirts and 17 women’s versions, priced from $618 to $890, are buttoned up over custom-made bust forms with The Conservatory logo and articulated arms and wooden hands.

An exhibit of Ron Galella’s photography, including portraits and party shots of night creatures such as Andy Warhol, Liza Minnelli and Bianca Jagger; Madonna and Sean Penn; John Lennon and Yoko Ono, and John F. Kennedy Jr. and his wife Carolyn Bessette-Kennedy, hangs throughout the store, courtesy of the Staley-Wise Gallery.

Métier London handbags, for men and women, will be priced from $700 to $2,000. Sarah Flint shoes, a favorite of Meghan Markle’s, were originally sold at retail, but the brand pivoted to a direct-to-consumer model, resulting in prices dropping from $795 to $395. Bolke said The Conservatory is the only retailer selling the footwear.

Bastide by Frédéric Fekkai is offering La Sieste Bastide, a free 10-minute escape from the city, in a private room with Provençal scenes painted by an artist, and immersive sounds and scents to transport customers — and entice them into buying Bastide products.

Teak Tearoom, The Conservatory’s café, will serve a light menu for breakfast featuring pastries from Thomas Keller’s Bouchon Bakery made on site at Hudson Yards; lunch, under Keller’s supervision, will consist of tartines, quiches, soups and salads. High tea will be administered by Waris Ahluwalia of House of Waris, and at night, the venue will become a Casa Dragones tequila tasting room.

“We’re hitting people with all five senses, so they say, ‘Wow, I’ve crossed into something different,'” Bolke said.