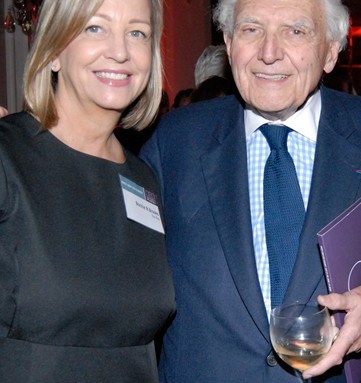 The economic crisis, which tops the agendas of politicians, business executives and consumers,  dominated conversation at the cocktail party to kick off this year’s WWD/DNR Apparel CEO Summit.

The summit’s theme, “Leadership + Vision” seemed particularly relevant because of worldwide financial turmoil, and executives who gathered at the St. Regis Hotel here took the opportunity to exchange notes.

“I think this is where people come together and brainstorm with each other, and just inspire one another,” said Josie Natori chief executive officer of Natori Co.

“It’s a very interesting time,” said Luigi Caroggio, ceo of Max Mara U.S.A. “I’d love to hear what the ceo’s have to say.”

Luca Luca president Yildiz Blackstone hoped she would “hear their ideas of coping with the economic climate, and if I hear good ideas, I will be happy to share them with my team.”

David Cooper, co-founder of New Zealand’s Silkbody firm, said: “I am sure they will be talking about the economy, and hopefully how they will see beyond it for themselves. The opportunity in all this will surely be a part of the conversation, and how to move beyond the current situation.”

The discussions weren’t limited to the cocktails session. Executives continued their conversations — even on the elevator ride to the ballroom. Case in point, Neiman Marcus Inc.’s Burt Tansky and Saks Inc.’s Stephen I. Sadove chatted up a storm during the minute-long ride. “What is this, are you merging?,” quipped Collective Brands’ Matthew Rubel. “Yes, we are,” joked Tansky.