NorthPark Center continuously reinvents its assortments in keeping with changing consumer tastes, while staying true to its mission of mixing art, culture and retail. 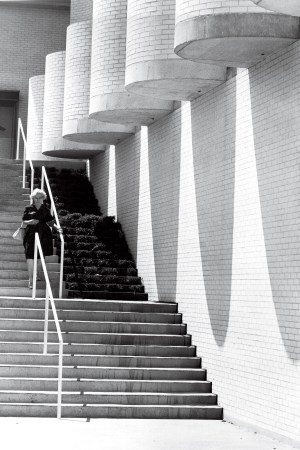 NorthPark Center is cleaning house — and it couldn’t be a more appropriate time.

This story first appeared in the September 23, 2015 issue of WWD. Subscribe Today.

Malls across the country, facing rising Internet sales and declining traffic, must remerchandise and in some cases drastically reinvent with alternative uses to capture visitors. But in the case of NorthPark — which this year celebrates its 50th birthday — it’s largely a matter of taking advantage of expiring leases to satisfy an eagerness to elevate the retail mix in an already busy, productive setting.

“Every 10 years, we have the opportunity to re-lease. We want to bring the best selection  of tenants to Dallas,” said Nancy A. Nasher,  who along with her husband, David J. Haemisegger, co-owns and manages the big Dallas shopping center.

“The most important thing is that we are laser-focused on the merchandising,” Nasher said, as she toured the property with a guest. “We rigorously monitor our retailers. We know how their monthly sales are doing. We know who is doing well and who is not. We also go to every ‘A’ mall. We know what’s going on in the shopping [center] industry.”

According to Nasher and Haemisegger, from 2015 to 2017, almost half of NorthPark’s retail space will have been reworked in one way or another. Of the center’s 230 stores, 100 will be either relocated, refurbished, downsized, expanded, or brand new.

A big part of the rollover entails weeding out weak teen retailers, building up contemporary and men’s wear, and offering brands that aren’t available in north Texas, other than possibly online. When all is said and done, 140 stores at NorthPark will be exclusive to the trading area — 70 more than before — though the leasing process isn’t as easy as it might appear from the outside. Expansion-minded retailers don’t put Dallas on top of their hit list.

“It’s New York, Los Angeles, Miami, Chicago, San Francisco, Las Vegas — and then us,” observed Derek Wood, director of leasing at NorthPark. “A lot of stores that we go after have a limited open-to-buy,” for new stores, and much of it gets eaten by real estate investment trusts.

“They have phenomenal portfolios,” Wood said. “You walk into Simon Property Group and they have every single major city covered. With us, it’s just one. You have to get out there and hustle your vision.”

The 2.7 million-square-foot NorthPark Center, with 1.9 million square feet of rentable space, has thrived for half a century. Last year, the center generated $1.2 billion in sales, or $1,100 per square foot, making it one of the nation’s most productive malls, and more than double the average mall productivity.

According to sources, Neiman Marcus, which has 221,000 square feet at NorthPark, generates in excess of $220 million in annual volume, establishing the store as first or second-biggest volume unit in the chain, neck-in-neck with Neiman’s in Houston and San Francisco.

“In some ways it’s like we have two Dallas flagships so we are fortunate,” said Karen Katz, president and chief executive officer of the Neiman Marcus Group, who once managed the NorthPark store. “The downtown Dallas store clearly has a history dating back to 1914, but NorthPark, because of its size and volume, has a certain flagship quality.”

“Wealth in Texas is pretty deep,” said Haemisegger. “Our sales have increased every single year.”

He has no shortage of explanations for the mall’s success, citing rising traffic at a time when other malls see thinning crowds; the growing Dallas-Fort Worth International Airport bringing shoppers from around the world who can receive refunds on Texas sales tax, and Texas being an income tax-free state that continues to diversify and reduce dependence on oil.

And don’t underestimate the appeal of the central air conditioning, which was a big deal when the center opened in 1965 — and it’s still not to be taken for granted.

But the biggest factor was a major expansion 10 years ago, doubling the size of the mall while retaining its aesthetic, and bringing Nordstrom, AMC Theatres, and other retailers and restaurants, including an 88,000-square-foot Barneys New York.

Barneys was a rare disappointment for NorthPark, opening a smaller unit years before that closed, and shutting the larger version in  2012, though the retailer did help attract other upscale emporiums to the mall and further the upscale aura.

“It was a beautiful store,” he recalled. “We told them that they have to be a lot more promotional, that they have to engage the community. Nordstrom does that. People in Dallas expect a high level of customer service.”

At the heart of it all is a sense of place that sets NorthPark apart.

NorthPark Center was founded by Nasher’s father, Raymond Nasher, a real estate executive and art collector, who had the vision to transform a 93-acre cotton field where his family would picnic into a shopping center filled with 20th and 21st century art.

NorthPark is part of a small breed of independent, upscale shopping centers like South Coast Plaza in Costa Mesa, Calif.; Bellevue Center outside Seattle; Bal Harbour Shops in Miami, and the Americana Manhasset on Long Island, where there’s a hands-on team that can keep close to the business, since they’re not managing a portfolio of properties.

But where else can you find Andy Warhol prints hung above the entrance to a Macy’s, or Mark di Suvero’s 48-foot-tall, 12-ton “Ad Astra” in the common area? How about Henry Moore’s bronze “Reclining Figure: Angles” situated between Macy’s and Nordstrom?

“Maybe 10 percent of our shoppers stop and take in the art, but we are as important as a museum,” said Nasher, who with her husband bought the mall from her father. “This is not done anywhere else in the U.S. Maybe the shoppers will notice it and like it, or maybe they won’t notice it. Hopefully, it will give them pleasure. There’s movement, there’s one aesthetic experience after another — a garden, a fountain, a concourse, a run of stores. It’s like a series of experiences making it more interesting for shoppers. We have a great public space. We need to use it responsibly, with great landscaping that changes and world-class art. It shapes how people feel, provokes your imagination. My father would say that if it makes you feel good, you’ve had a better day for it. My mother would say, ‘We should share the pleasure that art gives to us.’”

There is also a turtle pond, gently curvilinear planters that children slide down, and a degree of uniformity that starts with the signature white brick framing each store to create a sophisticated, consistent look. “The mortar is flush, not concave — it’s a subtle nuance,” she says, noting that the bricks were made in east Texas from clay and sand.

The disciplined approach extends to the storefront graphics, requiring lower-level stores to have signs no taller than 15 inches. Those on the upper levels can’t exceed 18 inches, though Nike was allowed to exceed the limit, with its big familiar swoosh. Every storefront is set back four inches from the lease line. “It looks better. It feels better that way,” Nasher observed.

“The design is very clear, understated, with a lot of natural light and beautiful landscaping. Natural light was a key part of the original design, as the sun moves across the sky, the light patterns on the floor change throughout the day. It makes NorthPark dynamic.”
Nasher also wants her guest to notice what’s not to be seen. “Most malls have kiosks. They make a lot of money. We have chosen that would not be part of our program and that beautiful landscaping and great art would be.”

“The ambience, the feel, the landscaping are big issues,” added Haemisegger.

The blend of art, architecture and landscaping, and the range of retail from luxury to moderate, has established NorthPark as one of the first go-to places for retailers ready to launch new formats or divisions. J. Crew Group, for example, opened its first Madewell and Crewcuts stores there. Michael Kors and Seven For All Mankind opened their first stores in NorthPark, and Nespresso picked NorthPark for its first enclosed center location. Lou & Grey and Under Armour have also selected NorthPark to be part of their initial rollouts. There’s also a children’s branch of the public library.

NorthPark would never have happened without the persistence of Ray Nasher, who had never developed a shopping center before. “It was the Sixties and nobody really knew then whether malls were going to be successful,” said Haemisegger.

“Dad said it took two years to convince the land owner to give him a ground lease,” Nasher mentioned. “He wanted to buy the property but that didn’t happen, so he got a 99-year lease. Then it took three years to plan, lease it, design it, finance and build it.” (Nancy Nasher and Haemisegger would ultimately buy the land, in 1999, from The Hillcrest Foundation. There could be some out-of-the box change ahead. Of NorthPark’s 93 acres, there are 14 acres available for development. “We could expand further, the best use is maybe not necessarily more conventional retail but maybe it’s a hotel or further dining. Maybe it’s large users, or office. We are trying to figure things that are synergistic but not traditional mall GLA,” said Haemisegger.)

Ray Nasher put together a talented team including an architect, a graphic designer, a landscaper and a leasing consultant who never built a mall together.

Stanley Marcus of Neiman Marcus, who like Ray Nasher was a major art collector, was pivotal. Nasher thought it was absolutely vital to get Neiman’s, which became the catalyst for the construction and for drawing other retailers. “To be honest, the lenders didn’t understand Neiman’s,” Haemisegger said. “It was the Sixties and the sweet spot was Sears, Penney’s, Montgomery Ward and Woolworth’s.”

Furthermore, Marcus wasn’t entirely on board with the program. He had it in his head to only have an entrance from the street, and not from the mall. “He did not believe that his shoppers would come into the shopping center,” Nancy recalled. “Fortunately, my father convinced him to open it up a little bit.”