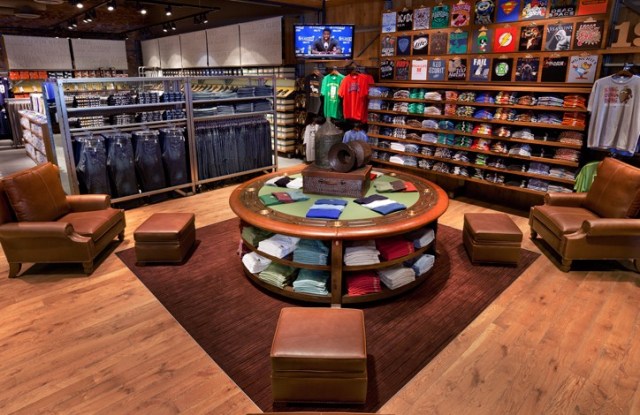 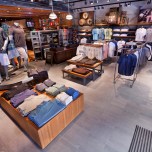 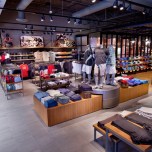 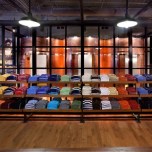 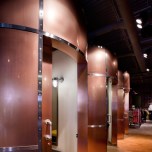 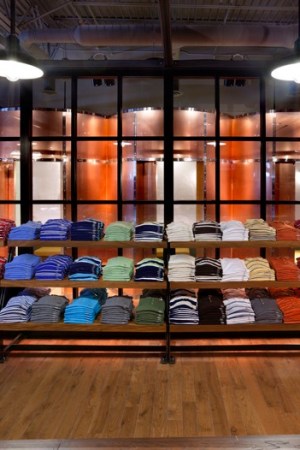 The Foundry will offer twenty-four feet of polos. 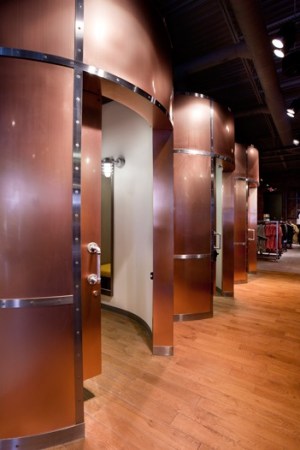 The Foundry fitting rooms are designed to appear like a tank in a brewpub.

The gloves are coming off in the battle for the men’s big and tall customer.

This story first appeared in the April 28, 2011 issue of WWD. Subscribe Today.

J.C. Penney Co. Inc. today will take the wraps off The Foundry Big & Tall Supply Co., a new retail concept targeted to this growing market segment — one that will pit it directly against the other major players in the men’s industry, all of whom have identified this niche as one ripe for expansion.

The biggest player is Casual Male Retail Group Inc., which operates nearly 500 stores including four Destination XL superstores, which combine all of the company’s concepts: the moderate Casual Male merchandise as well as the more-upscale Rochester Big & Tall, along with shoes. The company will add 10 to 14 additional DXL stores this year and, by 2015, expects to have between 75 and 100 units in operation.

The Men’s Wearhouse Inc., which does $300 million in business in extended sizes within its stores already, has committed to test three freestanding Big & Tall stores this year. The retailer has said that sales in extended sizes are running 40 percent higher than its regular-size business. And Jos. A. Bank Clothiers Inc., which launched a Web site devoted to these sizes earlier this year, has also reported success within the category.

And Penney’s wants a chunk of the pie, which is estimated to be a $6 billion annual business.

The Foundry will start its retail rollout with six stores in the Dallas market, five of which will have a soft opening today, followed by two in Kansas City, Kan., and two in Kansas City, Mo., next week. By 2013, the chain is expected to expand to 100 units and then triple that number within five years.

The Foundry is the first of three new businesses within the Plano, Tex.-based company’s new Growth Brands Division. The other two are Clad, a men’s Web site, and Gifting Grace, an online gift site, both of which will launch later this year. None of these businesses will have any external association with J.C. Penney; instead, they’re viewed as a new businesses separate and apart from the company’s core department stores. However, they will benefit from using Penney’s strong logistics and back-office capabilities.

“This is a men’s specialty store, not a family department store,” said Steve Lossing, president of The Foundry and a 20-year men’s wear retail veteran. “It will have no public affiliation with J.C. Penney.” Lossing has been with Penney’s for the past eight years, working in three men’s areas, including big and tall. Prior to that, he was at Parisian and Kauffman’s.

“We worked with an outside firm for the branding and creative. It has a whole different look and feel,” he said. “It’s very masculine.”

The stores are actually designed to replicate a microbrewery and feature an urban, industrial feel with concrete and wood floors, brick walls, steel and wood fixtures and modern lighting. There is a lounge in the center with comfortable leather chairs where customers are invited to sit and relax. There are flat-screen TVs both in the lounge and in the rear as well as an oversize poker table. An unusual component of the design is the fitting area, or “tank room,” which replicates the cylindrical copper tanks in a brewpub. And in markets without restrictions, The Foundry actually has happy hour where customers can stop in for a beer, water or soda at designated times. “We know guys hate to shop, but we want him to feel he can hang out and relax in our store,” Lossing said.

The assortment ranges from furnishings and sportswear to tailored clothing and shoes, or “soup to nuts,” according to Lossing. In focus groups prior to opening, potential customers said they hated having to go to three different stores to complete their wardrobes, hence the comprehensive mix. “They’re very frustrated with the selection available to them,” he said.

The Foundry carries a mix of national brands and private label and is broken down into three distinct sections: the porch, the lounge and the loft.

Upon entering, customers are in a porch area, which showcases traditional collections such as Nautica, Callaway Golf and Timberland, Lossing said. On the other side of the entryway are the modern collections, including Calvin Klein, Perry Ellis and Marc Ecko Cut & Sew. That’s followed by 24 feet of private label polos in solids and stripes, along with shorts merchandised under The Foundry Supply Co. name. Denim, which is a mix of brands and private label and screen T-shirts are also found here. Private brand overall is around one-third of the assortment, Lossing said, and is most heavy in basics such as polos, Ts and shorts.

The back third of the store is the loft, which houses the tailored clothing, dress shirts, neckwear, socks, underwear, belts and dress and casual shoes. Izod, Geoffrey Beene and Cubavera also are housed here. Other brands offered include Cole Haan, Dockers, Geoffrey Beene, Levi’s and Nike.

The red brick back wall merchandises licensed team apparel and activewear. “This gives each store a local flavor,” Lossing said.

The Web site already is up and running — it launched quietly two weeks ago and will send out its first e-mail to the public next week. “We’re running transactions on it,” Lossing said. “We sent an e-mail to around 110,000 people so we’re getting traffic, but it’s been all internal communication.”

When the marketing does hit, it will be “very unique,” Lossing said, saying it features “tongue-in-cheek” humor. For example, one ad will run the tag line: “You know what they say about a man with big hands…he shops at The Foundry Big & Tall Supply Co.”

The retailer will employ direct mail, radio, e-mails, run of paper advertising and billboards in the cities in which the stores operate. “Everything but TV,” Lossing said, noting that the company purchased some big and tall lists to mine for customers.

The target shopper for The Foundry is affluent, professional and generally 45 or older, although some younger customers may be lured by the Marc Ecko line or other more-contemporary collections. He generally makes over $75,000 a year.

Seven of the first stores are off-mall locations while three are in centers. Lossing said that it will be “interesting to see” which sites do best and he expects the big guys to gravitate more toward street locations, while tall guys may be more likely to shop in malls. Most stores will average around 5,000 square feet, with the smallest being 4,500 square feet and the largest 6,000 square feet.

Lossing declined to provide a volume projection for the new company but is confident that The Foundry’s distinct look and feel will allow it to carve a niche. “There are a lot of big and tall competitors out there,” he said. “We’re not the only ones who have identified it as a growth area.” In fact, he said the B&T population is expected to grow 25 percent over the next 10 years while the regular population growth will be flat. “People are just getting bigger and taller,” he said. “We offer a unique environment and assortment, and our associates are the cherry on top. They will bring the experience to life.

“There are not a lot of new men’s concepts out there. We want to create something exciting.”