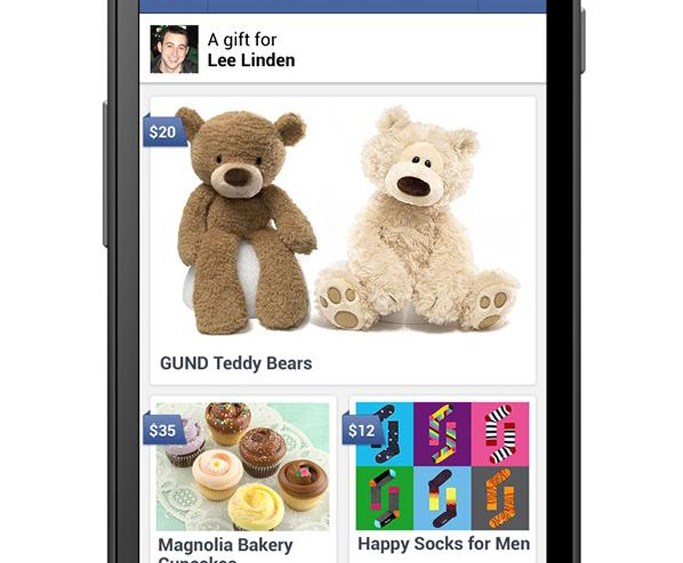 The social network last week launched a new service that enables users to buy and send gifts to friends through Facebook — an indication of the company’s larger e-commerce ambitions. Gifts will be tied into Facebook’s birthday reminders, which will urge users to send gifts to friends’ Timeline pages. The move wasn’t a total surprise considering that Facebook in May bought Karma, a gift-buying start-up, for $80 million.

Facebook has tried selling gifts before with little success, in August 2010 closing its “Gift Shop” to concentrate on aspects of the site such as photos, News Feed and games. Up to now, Facebook has primarily focused on e-commerce and payments through virtual goods mainly with social games.

But the social media giant is eager to generate new revenue streams, especially after its disappointing initial public offering in May. Earlier this month, the company decided to begin charging brands to use its previously free Offers service. Merchants will now be required to buy ads in order to use Facebook Offers, which allows businesses to push deals out to customers.

“Facebook is going to seek to monetize everything,” predicted Victor B. Anthony, an analyst at Topeka Capital Markets. “E-commerce is one of the ways. It could charge commission or some sort of flat fee, or take a percentage of sales. Look at what eBay and Amazon do with third parties. In Amazon’s case, [brands] essentially have storefronts and Amazon charges a back-end fee. Right now, people go on Facebook to trade pictures. They’re also clipping coupon offers and other things advertisers are promoting. As consumers learn that they can do a lot more on the platform than look at someone’s status, they’ll shop.”

It faces lots of competition, including from that other online giant, Google. The search engine on Friday launched Google Shopping, which allows users to search for products, but only shows paid listings. The search engine replaces Google Product Search, which included both paid and free listings. The change to the pay-to-play model is for the U.S. site only. Consumers can still do searches and pull up free listings, just not via the Google Shopping vehicle.

“This change means that using Google, consumers are no longer able to find the lowest price or do an exhaustive search for availability of a product among all retailers,” said Siva Kumar, founder and chief executive officer of TheFind, an organic shopping search engine. “Instead, they will only see the results from the small group of retailers who are paying to be on Google and will likely miss out on deals and availability from other retailers who are not participating.”

He also contended consumers are likely to end up paying higher prices as retailers are forced to pay higher ad rates to Google.

Similar concerns stem from Facebook’s decision to begin charging businesses for Offers. Sucharita Mulpuru, vice president and principal analyst at Forrester Research, thinks the decision moves the site a step closer to full-blown e-commerce. Charging fees for storefronts or transactions, “that’s the deadly concern,” she said. “Facebook is such a nominal source of sales right now. According to all of our data, any social network links are not terribly effective.”

As for gifts, “there are a bunch of companies like Wrapp that are doing similar initiatives using one’s social graph to send reminders,” said Mulpuru. “It’s definitely an attempt [to do e-commerce]. I doubt it’ll do much for anyone, though.”

Still, shopping and fashion are among the faster-growing categories of the site’s Timeline, Mulpuru said. For example, Fab.com launched its Open Graph to make it easier for people to share their purchases and favorite products on Timeline.

Already, tech support companies are lining up to make a profit from Facebook stores. LunarMods says it can “add an e-commerce storefront to your Facebook page,” while AvenueSocial pitches “social commerce tactics designed to drive bottom-line profitability.” “Facebook has to change the mind-set of consumers,” Anthony said. “In five years, it will be a different platform.”

Nordstrom last year experimented with commerce on Facebook via a limited scope, short-term test. “We did it precisely because we wanted to learn,” a Nordstrom spokesman said. “There was limited functionality, so we focused on a handful of categories. Customers could add items to their cart off of our wall. We explored that and it didn’t seem to be a very compelling functionality for the customer.

“Right now, we feel the best shopping experience we’re able to offer is through nordstrom.com,” he continued. “Our focus is much broader than promotions and transactional capabilities. It’s foremost about the customer experience. We found that Twitter is a terrific way for us to quickly and broadly connect with customers and solve issues and provide customer service. If we do a great job, the commerce will follow.”

The spokesman said Facebook is driving traffic and helping sales. However, Pinterest may be more conducive to commerce. “It’s our fastest-growing media site because of how visual it is,” he said. “We’re growing in leaps and bounds through Pinterest.”

“We remain extremely enthusiastic about social commerce, and f-commerce is certainly part of that,” said Alexander Bolen, chief executive officer of Oscar de la Renta. The company launched an f-commerce initiative in November 2011. “These things are evolving rapidly and we are continuing to try to experiment with ways to make the most out of social commerce initiatives. We try to move ahead on several fronts.” Bolen said the company has considered doing something on Pinterest. “E-commerce is a social medium we’re very active in and very interested in,” he said. “I see value in Facebook and other platforms. For a brand like ours, Pinterest and the Fancy have a very visual orientation. Facebook has a massive user base. I don’t think you can discount that.”

But Mulpuru has not been impressed with Facebook’s attempts at commerce. “There are a lot of ways that Facebook can make money,” she said. “[F-commerce] seems like probably one of the least promising. Everyone knows that nobody visits fan pages after pressing the ‘like’ button. Social network links drive so little in traffic, let alone revenue.”

Facebook’s revenue-generating opportunities lie in mobile advertising and using the data it captures to make the site a more holistic network, Mulpuru said. Gifts will allow Facebook to capture shipping addresses from recipients and credit card numbers from buyers, the kind of information the social media network and other marketers find valuable.

Anthony is optimistic that Facebook will eventually master e-commerce. “Facebook has somewhat of an edge in terms of having some consumer data,” he said. “I don’t see why Facebook shouldn’t be able to target consumers. You can pretty much target your ad or service based on demographic data. They [Facebook] give you pretty granular information.

“Facebook is being misunderstood by the market right now. There will always be competition in a space, but it’s going to be hard to disrupt one billion people on a site. Facebook will be able to monetize a search engine and e-commerce platform.”

Michael Pachter, an analyst at Wedbush Securities, said Facebook could certainly charge businesses for having a presence on the social network. “Coca-Cola’s Facebook page has 39 million people who ‘like’ Coca-Cola,” he said. “On Twitter, they pay $2.50 every time someone chooses to follow Coca-Cola.”

Twitter reportedly charges $2.50 per follower for promoted ads and 75 cents to $2.50 per engagement for promoted tweets. “Clearly, the merchants are willing to pay a lot,” Pachter said, referring to social media exposure.