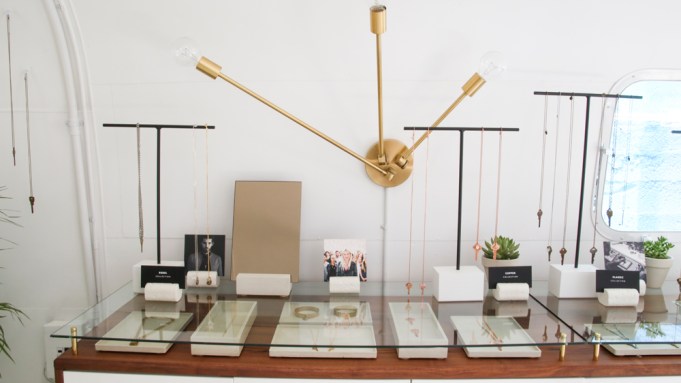 The Giving Keys is hitting the road.

The company, headquartered out of the downtown Los Angeles Arts District, will begin dabbling in its own retail with a pop-up — of sorts — at The Grove.

The company bought a 1973 Airstream, painted the exterior with chalkboard paint, gutted the interior, white-washed the walls and built out a display case to create a store. The company debuts the concept today and will keep it open through the weekend in a move that kicks off a yearlong road tour for the trailer in 2017. The traveling store will make stops at music festivals among other spots to test market response to its necklaces and bracelets adorned with old keys engraved with inspirational words, such as fearless, strength and love. The company is in talks to potentially bring a virtual reality component to the Airstream for next year that would let customers experience the brand through the eyes of employees transitioning out of homelessness.

“Really, for us internally, this is a test to see how it performs in different markets and help us identify what markets respond the strongest to our mission,” said president Brit Moore.

Permanent stores could likely come online as early as 2018, with Los Angeles and Nashville at the top of its list of locations, along with the Southeast, where the company also does well, according to Moore.

“With The Giving Keys mission and the pay-it-forward activation with each product, we found that it’s really important for customers to understand those two components,” she said. “Sometimes it’s hard to communicate [that] with other wholesale partners so we’re excited about having an opportunity to tell our brand story in a more comprehensive experience.”

The Giving Keys, started in 2008, bills itself as a “pay-it-forward company,” employing those transitioning out of homelessness. The actual necklaces and bracelets are meant to inspire the wearer, who can later choose to gift the piece of jewelry to another person they feel could benefit more from whichever word is stamped on their key. People who visit the pop-up are encouraged to write on the Airstream’s chalkboard exterior their pay-it-forward stories.

The company projects this year of between $9 million and $10 million, consistent with the doubling of revenue it’s seen over the past few years, Moore said. The Giving Keys employs a team of about 60, which ballooned from three workers four years ago.

The brand is in about 1,300 stores, including Nordstrom and Fred Segal.

Candles, which will be rolled out for holiday on the company’s web site, are among the new product categories the company will begin dabbling with via its online channel, which is seen as “a lower risk and higher margin way” of testing new items, Moore said.