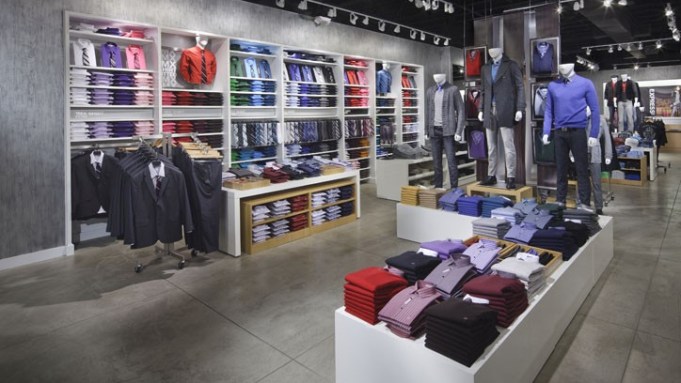 Express Man has had two lives.

Its first incarnation was as a spin-off of the Express women’s chain in 1987, a grain of an idea that was renamed Structure two years later and eventually grew to become one of the largest men’s wear chains in the country.

But in David Kornberg’s mind, the business really started in 2001, when its former owner, The Limited, relaunched the men’s operation under the Express Man banner after Structure fell on hard times. The Structure trademark was sold to Sears in 2003.

“We put our first product with the Express Man label in stores in fall 2001,” said Kornberg, executive vice president of men’s merchandising and design.

Today, some 550 of the company’s 577 stores are dual gender, and men’s accounts for just more than one-third of Express Inc.’s $1.8 billion in annual sales.

“We’ve really grown significantly in the past nine years,” he said. “Guys today are more discerning and really enjoy shopping.”

Kornberg, who was with Marks & Spencer in the U.K. before joining Express Man 10 years ago, called the Structure years “just distant history. The beginning of this chapter was 2001.”

He said there’s no confusion in the market between Structure, which is still being used as a Sears proprietary label, and Express, calling it a “nonissue.”

“We’ve established a brand with a very loyal customer base that is focused on the essentials of a man’s wardrobe,” Kornberg said. “The key fundamental is affordable, understandable, wearable men’s fashion.” An easy concept in theory but harder to pull off. “Just because it’s simple doesn’t mean it’s easy.”

Although the “common DNA” of the label is “going out” clothes, the offering ranges from underwear and jeans to suit separates. “He can get a piqué polo or a fitted shirt and a slim-fit pair of jeans or a suit. One of our unique selling propositions is that we have both dressy and casual,” he said.

Kornberg said the company has seen “balanced growth through all categories of business” and envisions “significant potential for the future. We see unlimited opportunity in the men’s business. Over the past five years, we’ve continued to build loyalty and awareness, so there’s really no limit to what we can achieve.”

In the past nine years, Express Man has become known for several key items, especially woven shirts, he said, pointing to the Wanamaker style, a blend of cotton and spandex and is among the best-selling items.

“The Wanamaker Shirt is a core key item,” he said. It’s available in either a fitted or slim fit and retails for $49.50. More recently, the company expanded that franchise by adding a military-inspired version of the shirt, called the MK2, as well as a Western model, the TX8.

Piqué polos are also a hallmark of the men’s business and incorporate the brand’s iconic lion logo. “We tested the logo six years ago and anything we put it on sells great,” he said. “Young guys really identify with it.”

Kornberg said the genesis of the logo came from internal testing. The company was looking for something that was “associated with strength and masculinity, so we tested a polo, one with a lion and one without, and the lion sold more, so it won,” he laughed. “But it’s evolved over time, and we now put it on track jackets, casual shirts and other pieces.”

Graphic T-shirts are “a mainstay,” he added, and shorts, a popular item with young guys, stay on the floor through the third quarter, he said, because “that’s what guys wear.”

In terms of dress pants, Kornberg said the slim-fit Producer pant, which features a slim fit, low rise and straight leg, has been a front-runner for the past five or six years. It retails for $59.90, but the store often runs promotions such as buy one at full price and get the second at $39.50. New for spring is the Agent fit, which is more relaxed and fuller in the thighs.

“We offer these fits in jeans so it doesn’t make sense not to offer them in pants as well,” Kornberg said.

Express Man also offers suit separates at $198 for solid jackets and $88 for the pants, or $228 and $98 for patterns. Vests and ties, in narrow, standard and skinny, complete the outfit. Outerwear includes military greatcoats for $298 and fitted peacoats at $228. There’s even a jersey-lined faux-leather jacket — the hangtag reads: (Minus the) leather — for $148. And for the foundation, there are several models of underwear, including sport trunks, boxer briefs, traditional boxers and basic Ts, crews and V-necks.

“We have built a core connection with the customer on these key items,” Kornberg said. “Our guy needs to feel familiar, so the men’s assortment evolves but doesn’t change completely.”

Express Man extended its franchise last year with a fragrance called Reserve, which is focused on the dressier part of the business. A lighter, more casual scent, Honor, was released in June.

“We’re pleased with how sales are going,” he said. “These add another tier to the business.”

The majority of the stores are in malls and attract a customer who averages around 26 years of age and is a “young professional,” Kornberg said. “He’s already on the ladder at work but also enjoys going out. He has an interest in fashion, and it’s our job to editorialize and provide him with a clear point of view.”

And it doesn’t hurt that women’s wear is sold in the same location. “A key advantage of the brand is that we’re dual gender,” he said. “So when she’s out shopping, her other half can be out there as well. It’s been great for us working with an already-established women’s business.”

To communicate with the customer, Express Man uses direct mail, e-mails up to three times a week and is active on Facebook and Twitter. “We take social media very seriously,” Kornberg said. “Our customers are totally hooked into it, so it has to be central to what we do.”

Although its association with The Limited changed when a majority interest was sold in 2007 to Golden Gate Capital, a private equity firm, the company is still headquartered in Columbus, Ohio. There’s a design team in New York but the merchants are based in Columbus. Kornberg and the team also visit stores constantly to keep close tabs on customer demand. “It’s all about being out in the stores,” he said during a tour of the 34th Street flagship in New York.

Looking ahead, Kornberg said he sees opportunities for expanding into other categories such as footwear — “We look at this as an online business” — as well as an expanded personal care selection.

“But there’s also a lot we can still achieve within our core categories of business, such as woven shirts, sweaters, knits and denim. And we see huge opportunity in casual pants.”

With its blend of dress apparel and casualwear, Kornberg believes Express Man has found a niche in the competitive world of retail. “We look at all sorts of different retailers as competition — wherever else he might shop,” he said, pointing to Macy’s and Nordstrom on one hand, and mall-based specialty stores on the other. “But our brand position and our focus on dressing and going-out clothes puts us in another category from collegiate brands like American Eagle, Aéropostale and Abercrombie.”

Affordable price points, he believes, also give the brand a leg up. Because of the mall-based focus of the stores, buy-one-get-one-at-half-price and other offers are prevalent. “Promotions are built into the business model because that’s part of the business today,” he said.

Interestingly, Kornberg said that the higher-priced denim and shirts are among the top performers, like jeans for $98 or graphic Ts for $39.50. “When the product is right, he doesn’t mind paying the price,” he said.

Kornberg remains optimistic that Express Man will continue to gain ground in the future. “When I think of where we’ve gone in nine years, I’m encouraged,” he said. “It’s been a fantastic journey but there’s plenty of road still ahead.

“In the men’s business, it’s the details that differentiate the brand,” he added. A piqué polo is a piqué polo, but it’s the “fit, wash, color and trim that make the brand. At the end of the day, it’s desirable product that will make the difference.”