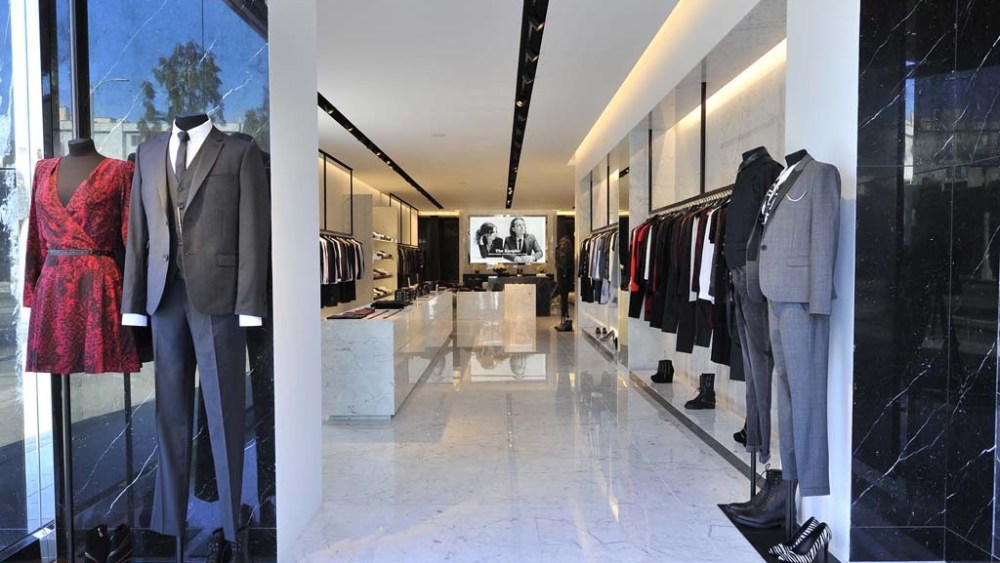 The 3,100-square-foot store is the brand’s 10th dual-brand location combining the signature line and The Kooples Sport, a concept that made its debut with the London store on Old Brompton Road last year.

Since launching the The Kooples Sport line in 2012, the brand has opened 20 Sport-only stores in addition to its 115 The Kooples stores (for a total of 145 retail boutiques worldwide including the latest U.S. stores). The company has 350 points of sale worldwide, with direct operations in 13 countries and total distribution in 28 countries.

Highly visible from the trafficked corner of Robertson Boulevard and Alden Drive, the clear glass facade and entryway show off the jumbo screens inside playing the black-and-white brand videos. Inside, a long, narrow layout with men’s on one side and women’s on the other gives way to an alcove dedicated to The Kooples Sport and a seating area featuring a PK65 low table by Poul Kjaerholm, a pair of FK710 Skater chairs by Preben Fabricius and Jørgen Kastholm and a Jacques Charpentier leather sofa.

The meticulous details aren’t surprising to anyone familiar with the brand. Founded in 2008 in France by Elicha scions Laurent, Alexandre and Raphael (the family behind Comptoirs de Cotonniers) on the concept of blending French style with Savile Row tailoring (its suiting is made in partnership with Norton & Sons) for women and men, the business has seen rapid growth first in France, then Western Europe. Now it’s ready to tackle the U.S.

“It’s a strong concept and we know Americans like concepts. We can see from the data on the tax refunds [European valued-added tax rebates] that some of our first customers were Americans and we see couples often coming into stores to shop together,” said chief executive officer Nicolas Dreyfus.

He calls the U.S. strategy “step-by-step. “We wanted to open both coasts at the same time, with the latest collections.” The entire store is stocked with fall 2014 merchandise, comprising apparel, shoes, bags and watches, which are all produced in house in Europe. Retail prices range from $95 for a T-shirt to $900 for a men’s suit. The company delivers six collections per year, with about 1,000 stockkeeping units per season across both lines.

The New York flagship, on 14th Street in the Meatpacking District between the Apple Store and Hugo Boss, will open in mid-August and a second New York location on Mercer Street in SoHo (the former Phillip Lim space) will open in Oct. 1. A secondary California store on San Francisco’s Fillmore Street opened June 28. Other markets eyed are Miami and Chicago. The brand launched with 20 stores in France, followed by 40 in the U.K., it’s second largest market, then Western Europe. Currently, wholesale represents about 20 percent of the business, including accounts in Bloomingdale’s, Saks Fifth Avenue and Nordstrom, as well as Asia.

Dreyfus said he expects U.S. sales to total $100 million in the next three to four years, or about 25 percent of the company’s total business. Its fiscal year ending Aug. 31 is expected to tally global sales of $245 million, and earnings before interest, taxes, depreciation and amortization between $40 million and $42 million. Global overall growth for next year is expected to be 20 percent with the advent of the U.S. stores, or an estimated $300 million in sales.