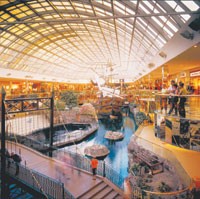 In the past six months, WWD has reported that America’s appetite for building massive malls has weakened, thanks to a heavily saturated market. Instead, a number of existing malls have expanded — or have plans to expand — their square footage, incorporating outdoor space and adding retailers and dining and entertainment complexes. International Council of Shopping Centers has provided the largest malls in North America by gross leasable area (GLA) in square feet. Both Canada and the U.S. know they’ve got some competition from the Eastern Hemisphere: China has been on a mall development streak and has unveiled its massive South China Mall, in Dongguan. ICSC reported late last year that following the final phases of construction this year, the South China Mall will cover 5.2 million square feet of GLA.