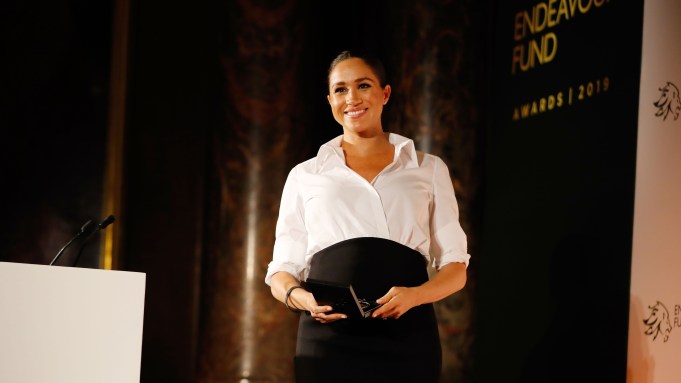 LONDON — Nearly everything Meghan Markle dons turns into retail gold, and that will soon include baby clothes — and furniture and toys, more than any infant could possibly need or want. Retailers and industry analysts alike foresee shopping frenzies similar to those that followed the births of Prince George, Princess Charlotte and little Prince Louis. They also say the new baby’s retail pulling power could stretch to sustainable baby brands given Markle’s own eco-conscious style choices.

Ever since she became associated with the British royals, pre- and post-marriage, Markle has proven to be a retail hit. Her wedding alone boosted the U.K. fashion industry by an estimated 150 million pounds, according to Brand Finance, a branded business valuation consultancy.

The new Duchess of Sussex’s influence has been seismic: During her and Prince Harry’s Australia tour, Markle wore outfits by Australian designer Dion Lee, who said his web site quickly crashed, and within 24 hours he’d sold over 250 units of a navy blue dress worn by her. She also topped Google’s 10 most-searched people in 2018.

While the influence of the royal family has always had appeal, Robert Burke, chairman and chief executive officer of Robert Burke Associates, says Markle is even more popular than the Duchess of Cambridge because of her background. “Meghan represents a less-conforming [person] than the expected perception of a royal and I think she will connect with even more people. She’ll dress children pretty tastefully, but it won’t be as traditional and prim and proper; it will have more fun and whimsy,” he said.

There will likely be a strong sustainability angle to the baby’s wardrobe, too, as the duchess has also been known to wear clothes with a conscience. “When she is making choices for her own ‘next generation,’ we can make a strong assumption that the brands Meghan looks to will have a strong stance on social good,” said Rebecca Robins, global chief learning and culture officer from Interbrand, a brand consultancy.

Robins said she’d love to see Markle dress her newborn in “unsung” clothing brands. “The Myna Mahila Foundation in India is one of the charities that the royals asked people to donate to for their wedding. It would be a powerful signal and call to action to mums the world over to see Meghan support brands aligned with the causes that are close to her heart,” she added.

Helen Brocklebank, ceo of the British luxury goods association Walpole, also expects Markle to make sustainable fashion choices for her newborn. “The duchess’ advocacy of brands with sustainability at their core has gone from strength to strength and that is likely to continue following the birth of her child, and the products chosen for the royal baby,” she said.

Meghan will probably turn to brands that already have a place within her wardrobe. Stella McCartney children’s wear should be a number-one contender as the duchess chose the environmentally conscious designer to create her wedding reception dress.

“A new royal baby has the chance to highlight how important producing for the next generation is,” said Diana Verde Nieto, cofounder and ceo of Positive Luxury, a platform that promotes brands making a positive social and environmental impact.

“We hope that Meghan’s little one will shine a light on the mum and baby brands that already stride ahead in the sustainability area, such as Hevea, which makes nontoxic children’s bath toys, or Leggybuddy, a maker of hand-crafted toys,” said Nieto. Both of those brands have the Butterfly Mark, an environmental seal of approval from Positive Luxury.

The duchess could also look to Veja, the ethically sourced French footwear brand that makes its products in Brazil. She could dress her newborn in colorful Veja high-tops and an organic cotton onesie from Australian label Purebaby, which makes everything from organic cotton.

Other observers say Markle will no doubt preserve her international outlook, and her knack for mixing high and low fashion, when dressing the new baby. To wit: she’s been spotted in J. Crew, Jigsaw and Canadian retailer Aritzia.

“Over the past year and a half, Meghan Markle has mastered the art of diplomacy through her clothes, wearing a perfect mix of British and American designers and influencing fashion purchases all around the world. With the birth of the first baby Sussex, we can expect this trend to continue,” said Morgane Le Caer, insights reporter at Lyst, a global fashion search platform.

“I wouldn’t be surprised to see the couple’s bundle of joy dressed in both designer and high-street clothes. Some of the duchess’ favorite brands like Mackage, Burberry and Ralph Lauren also design clothes for children, which means that we’re likely to witness adorable mummy-and-me fashion moments,” Le Caer added.

Sari Sloane, cofounder of Everafter, four upscale specialty stores for school-aged children through 13 years of age, said that increasingly, parents are dressing their children to reflect their own style. “As it relates to Meghan Markle, as kids get older, parents are looking to be aspirational, but they’re also being influenced by real people,” she said. Given that Markle is probably the most-real of the royals, if there is such a thing, the prospect of the Duchess of Sussex wardrobing a child bodes well for pint-size apparel makers.

Markle’s babywear choices are sure to generate buzz in both the U.K. and the U.S. According to Brand Finance’s British Luxury report, when Markle has worn British brands, their desirability has rocketed among 35 percent of the U.S. population.

“For the baby fashion market, this means a considerable uptick in interest for those brands worn by the new royal bundle of joy. We are most certainly expecting a frenzy in this market, both for in-store purchases and online orders, especially as the love affair between the royals and the fashion industry shows no sign of slowing down,” said Alex Haigh, director of Brand Finance.

Analysts also predict that the duchess’ baby — although he or she is unlikely to get near the throne — will have the same impact as his or her cousins. “It is likely that the new arrival’s wardrobe will cause a similar fashion frenzy that we have seen with all three of the Duke and Duchess of Cambridge’s children,” added Haigh, pointing out that Princess Charlotte’s Little Alice London periwinkle dress was snapped up within days.

The royal children are predicted to boost the U.K. economy. According to Brand Finance, Princess Charlotte will inject $5 billion over her lifetime while brothers Prince George and Prince Louis will be responsible for goosing $3.6 billion. The Centre for Retail Research estimates that Markle’s newborn is predicted to increase spending in children’s wear and infant products by roughly $1.48 billion over a two-year period.

Jessica Michault, senior vice president of industry relations at Launchmetrics, an influencer marketing software company, said the British royal family holds power when it comes to the industry. “When they wear something out for an official appointment or a casual day with the family, that item disappears off retailer shelves immediately,” she said.

While the entire U.K. has been brimming with pride and waiting eagerly for word of the birth of the first baby Sussex, WWD asked designers to conjure up presents for the new heir. What do you give a child born with a silver spoon in its mouth? Teddy bears are always a go-to gift. Rebecca Minkoff’s are flocked in a tiny floral print and wear crowns, although the tyke will likely never don one, as he’ll be seventh-removed from the throne.

Given the royal family’s association with jewels, it’s not surprising that baby bling was a popular present. The new royal will be the most dazzling baby in the playpen with a Germanier bejeweled rattle, and Messika birth bracelets, and gold and diamond pacifier clip. There’s even a cradle’s brooch by Antonio Marras, a signature Sardinian jewel called Su Coccu, made from filigree, a black onyx stone and decorative corals.

Adam Lippes’ fantastical crib is topped with an elaborate canopy, inspired by the history of royal English tents or portable palaces, as they were sometimes called. Rebecca Moses turned a cradle into a Royal Tartan Moses Basket, replete with a mobile of oh-so English icons such as a miniature Queen’s Guard, London phone booth and British flag. For baby’s outings, Cacharel creative director Pascal Millet’s charming pram is covered in one of the French house’s classic prints, and from Marie-Chantal Children, there’s a carriage sprouting angel wings.