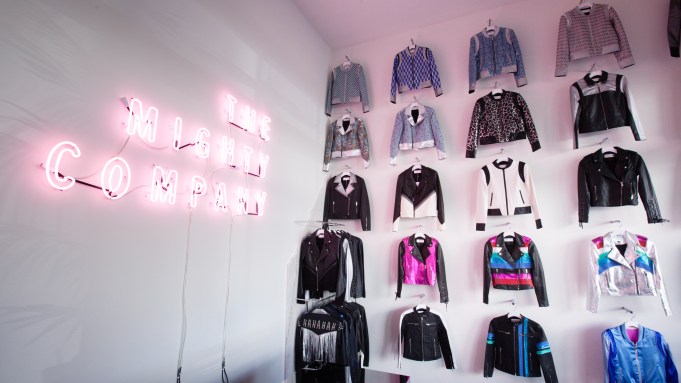 Los Angeles jacket company The Mighty Company has made its way to retail.

The direct-to-consumer fashion label, which launched last year online, focuses solely on outerwear with a selection of high-end motorcycle and bomber-style jackets carefully crafted from materials such as silver foil leather, calf leather, woven fabric and suede. While many have coasted on the trend of black moto jackets as closet staples, The Mighty Company founder and creative director Jessie Willner has created a following with her classic silhouettes injected with doses of character through color blocking or metallics. The company also offers customizable options ranging from the addition of metal studs to placing a photo on a jacket.

The company’s Melrose store totals 3,200 square feet and officially opens Sunday, placing it near digitally native peers such as Revolve and Reformation.

“That location is just representative of our girl,” Willner said, adding the street is where her customer shops.

The space is also being shared with Los Angeles made-to-order men’s brand Bordo and production studio NYLA. The three businesses went in on the lease together, Willner said, and now have a creative, collaborative space where her line and Bordo can sell product in the front, while NYLA’s production services on the back end will be shared amongst the brands for certain projects.

Willner designed her retail space just as carefully as she does her jackets with product hung on one wall as an installation. A touchscreen mirror allows customers to peruse the jackets and select the ones they want to try on.

“The whole concept is that it’s like one giant dressing room and we built the technology to support that,” Willner said.

To further entice customers to come into the store, Willner said the space will carry exclusive styles beginning with a racer-inspired, blue metallic jacket adorned with white stars. The jacket retails for $995.

Up next, the company will expand into denim outerwear for spring and summer with plans to broaden its use of different fabrics, while still staying rooted in jackets, Willner said.

Although the brand originally started selling direct, it more recently began selling through Revolve and Shopbop. Distribution through a select set of wholesale partners will continue, but the focus will largely remain on selling direct, Willner added. More stores could very well be part of those plans if demand calls for it.

“I think that our longer-term plan is to open many stores in the future,” Willner said. “We like the concept of growing as our brand grows.”