A few freshly minted retailers get set to greet the fashion crowd. 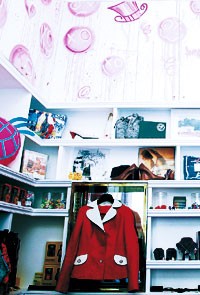 “We wanted something very personal,” said Para. “We couldn’t do big, so we went eclectic.”

It might be petite, but Madame André is symbolic of a young generation of imaginative Parisians who are creating an alternate shopping experience. Para’s husband even decorated T-shirts, sweatshirts and blouses with customized ribbons emblazoned with graffiti.

Ramdane Touhami’s Bureau Politique shop on the Rue des Ciseaux, on the Left Bank, also captures the indie spirit. With a log-cabin facade, it hardly looks like a clothing shop. But inside it’s studiously chic with polished hardwood floors, antique chandeliers and shelves covered in tartan fabric.

“I wanted it to go against the grain,” explained Touhami, who also designs the men’s wear offered inside. “I wanted something chic, but also something wacky.”

On the nearby Rue Bonaparte, Mona Blonde has opened Mona, a 1,500-square-foot shop stocking clothes from Lanvin, Alexander McQueen and Azzedine Alaïa, as well as shoes from Michel Vivien and Pierre Hardy. With no exterior markings, it’s a discreet presence just off the well-beaten Saint-Germain shopping circuit. Former Philippe Stark underling Kristian Gavoille designed it with simple sophistication, including white leather stools and splashes of red on the walls.

“We were shooting for a real Parisian feeling,” said Blonde. “We want it to show our personal aesthetic. We’ve even asked designers to do limited editions for us.”

Meanwhile, Blonde said the small shoe store she operates on the nearby Rue des Canettes would be transformed into a vintage footwear showcase.

Lingerie queen Chantal Thomass has staged a retail comeback on the Rue Saint-Honoré. The space is pink and boudoir-themed, well-suited to her lacy confections.

Galeries Lafayette’s teen floor — dubbed VO — boasts a streetwear ambiance, replete with booming techno music mixed by a resident DJ installed in a camper. VO has a “custom studio” where shoppers can customize their purchases and “XXL” fitting rooms for groups of friends to try on clothes together.

Merchandising is inventive. There is a “denim bar” with about 20 brands; a “must-have alley” to find the latest hot styles, and a selection of Manga comics. A cafe has washing machines where customers can sip a smoothie while doing laundry.

Also on Boulevard Haussmann is Benetton’s new 40,000-square-foot, five-floor megastore. Luciano Benetton said the unit, close to competitors Hennes & Mauritz and Zara, is part of the Italian firm’s push to increase its profile in France, where it already operates 150 units. “We plan to open another 20 stores in France over the next two years,” said Benetton. “They’ll not be megastores like this one, but smaller units. The megastore is for image, the smaller stores are for profits.”