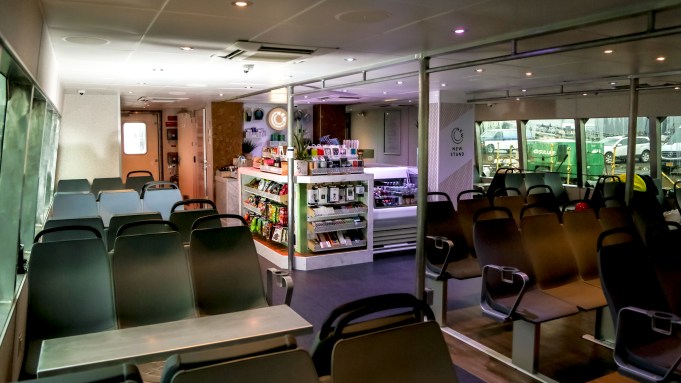 When the NYC Ferry System launches, passengers will be greeted with a not-so-typical concession station.

New Stand, which opened in 2015, is expanding its boutique convenience store concept to six of the 20 new boats that will be running citywide starting May 1. By July, 16 of the 20 boats will be outfitted with the shop.

“They are helping us get much more hip,” said Paul Lambson, head of customer success at NYC Ferry, which is operated by Hornblower. “We were looking to do something cool to do with concessions and New Stand was a perfect fit.”

At its core, the New Stand, which also has locations at Brookfield Place, Turnstyle at Columbus Circle and the Union Square subway station, is an elevated convenience store that sells everything from bottled water and Kind bars to fish-shaped nail clippers and coloring books. Its ferry locations will also sell beer, wine and coffee.

But its cofounders, George Alan, Andrew Deitchman, David Carson and Lex Kendall, are aiming to create an ecosystem and platform that provides their customers with convenience on a daily basis. The retail locations work with a free mobile app where customers can do purely functional things, such as purchase items from the shop and redeem deals, along with entertaining things such as read articles or listen to music playlists.

“We are a media company as much as we are a retail company,” said Deitchman, who previously cofounded the ad agency Mother New York.

The app has 15,000 downloads and around 1,000 users per day — the user base is made up of mostly Millennials and it skews female. According to Deitchman, they’ve increased engagement within the app with a loyalty program. Customers earn points they can use in store by clicking on an article or listening to music. Deitchman said 40 percent of New Stand’s customers are app users.

“The introduction of loyalty points doubled our engagement. Our users are really enjoying the gaming aspect of it,” Deitchman said. “We just want to figure out how we can better integrate into someone’s route and journey.”

Media companies and brands have taken to the concept, which Deitchman said is making a profit with retail sales and its media business combined. New Stand has partnered with Refinery 29, Wired and WeWork on pop-up shops and recently worked with Urban Decay on the launch of its Jean-Michel Basquiat makeup collection. A wall within its Union Square shop was dedicated to the new assortment a week before it hit Sephora and the New Stand app was populated with content related to the launch.

In addition to growing out their presence on the ferry system, they will also open locations within the Los Angeles and Minneapolis-Saint Paul airports.

While there are no immediate plans to work with other retailers, Deitchman said he sees many opportunities. He suggested the app could serve as a connector and discovery tool for mall goers.

“When I think about the role we can play, I see our business as something that helps people while shopping,” Deitchman said. “Our app can notify customers where to go for certain deals or connect them with new product. We see ourselves as being kind of the straw that stirs the drink.”