NEW YORK — New Stand has opened its first content and innovation hub and headquarters in the former Patricia Field space at 306 Bowery.

The Millennial-skewed retailer that is seeking to modernize the notion of a traditional newsstand with its eclectic mix of tech products and consumer-facing apps, operates 39 stores around the country, including 27 on New York City’s high-speed ferries and others in subway stations and airports — but this is the first location that will serve up programming and pop-ups as well.

“306 Bowery is our answer to how modern brands will become a more useful and organic part of people’s lives — through product they need and want, digital content that’s fun and engaging, and now experiences that they want to enjoy — all under one roof,” said cofounder Lex Kendall. “Our hope is that people will look to 306 as a place they can come together, learn, share and discover just as they always have at their local newsstand.”

The 6,700-square-foot, two-level space houses a street-level convenience store on Bowery, selling products including Sennheiser headphones, a downstairs office, a space for events and a pop-up space in the rear, which has a dedicated entrance on Elizabeth Street. 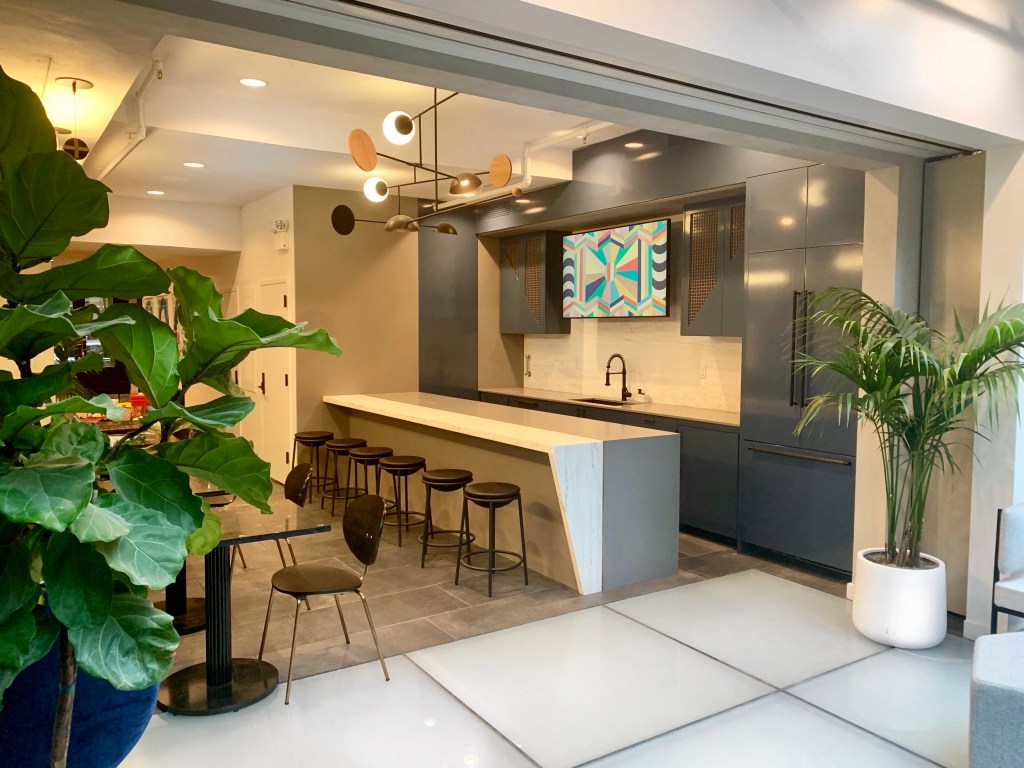 Kendall said the pop-up space is available for brands to set up shop and sell directly to consumers, while the New Stand app, which launched with the opening of the first New Stand location at the Union Square subway station in 2015, offers free mobile chargers and umbrellas, self-checkout, and a loyalty program that incentivizes shopping and browsing location-specific content. Fifty percent of New Stand purchases are made on the app.

Even so, the company was respectful of the history of the retail space. The address was made famous by Patricia Field, who moved there in 2012 and closed up shop three years later. She ended her retail career on Bowery after almost 50 years of business.

The New Stand retains some elements of Field’s store, notably a brick corner covered in glitter, which was retained as a nod to the store’s history. The store is hosting an opening event tonight.

“Patricia Field is an icon — as big of an effect she’s had on fashion over the years, even bigger is her impact on the Bowery and its transformation into such a vibrant and distinctly New York neighborhood,” Kendall said. “She is a big reason why this area is so rich with culture, creativity and community — three things we hope to feed into and continue to impart.”

Looking ahead, New Stand, which Kendall said has both angel and institutional investors, will open four new locations at Newark Airport and a second in Seattle in July, followed by two in New Orleans in the fourth quarter. There are also company has plans to open more community hubs in the future. “We expect to scale quickly now,” he said.