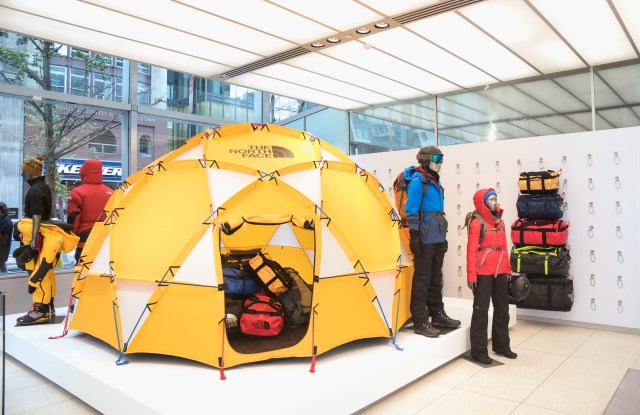 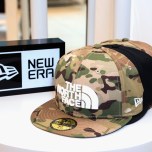 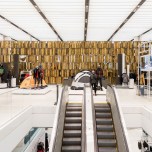 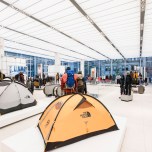 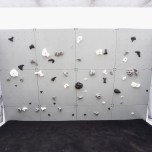 The North Face has opened its first flagship — and largest store — on Fifth Avenue in New York.

The 20,000-square-foot, two-level location, on the site of the former Joe Fresh store on the corner of 43rd Street, features several extras designed to lure consumers to stop by and stay a while including charging stations, a coffee bar, a climbing wall and an embroidery station. There is a full-size dome tent on the main floor that is large enough to hold eight people, and the fitting rooms are also made with the same nylon and aluminum used in the tents.

The custom embroidery station is a partnership with Lot, Stock and Barrel and allows customers to add vintage or new patches for $25 to $425. The Los Angeles-based Lot, Stock and Barrel is set up inside the front door and its craftsmen use chainstitch embroidery machines from the Thirties to Sixties to affix the patches to North Face jackets, caps or other pieces.

The main floor houses the “urban exploration” collection that is targeted to a more city-oriented, lifestyle shopper. Footwear and accessories such as bags are also merchandised on the ground level. Tucked into the rear is a glass-enclosed case holding the red Himalyan suit worn by the famous mountain climber Conrad Anker.

The second floor features both high-end performance collections, including its most elevated offering, the Summit Series, and more lifestyle offerings. Gear for climbing and camping including Yeti coolers and Petzl climbing gear are carried along with some New York-specific merchandise such as T-shirts and beanies. This floor also has the “mountain athletic” line of running and indoor climbing gear and the “mountain culture” line, which is more lifestyle-oriented and complements the urban exploration line.

“Because the store is 20,000 square feet, we can show the whole offering for the first time,” said R.J. Abbott, director of brand experience.

No other new store openings are planned for this year, but The North Face is in the midst of “refreshing” a number of its units, according to Mark Cardinale, director of special projects. “We’ve done three already and have four more to go by Nov. 21,” he said. The revamped stores will feature a similar “flavor” to the flagship, he said.

The flagship is The North Face’s third store in New York and its 68th full-price store globally. There are also 40 outlets. The brand, which is owned by VF Corp., is celebrating its 50th anniversary this year.