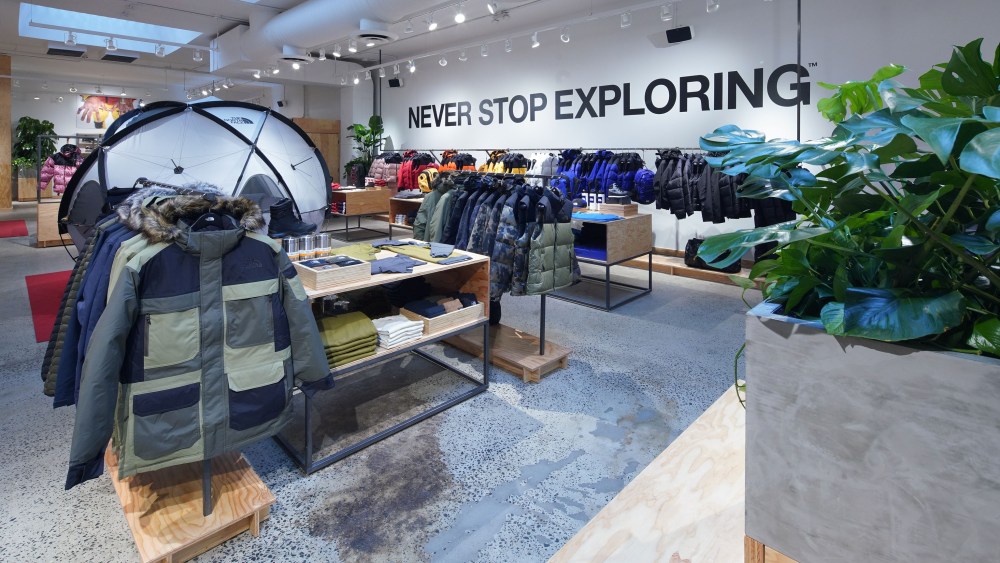 After a yearlong search, The North Face has opened a 4,000-square-foot prototype store in Brooklyn’s Williamsburg.

Located at 134 North Sixth Street, the outpost is near a Vans store, another VF Corp.-owned label, and the prototype is across the street from a Lululemon boutique. To remind shoppers that The North Face was brand-built with mountain pursuits in mind, there is a series of portraits on one wall featuring such adventurers as Conrad Anker.

Performance-oriented shoppers will find the brand’s Ventrix styles, made from what was described as a breathable down. There is also an assortment of options from the Summit series, a layering system that includes base layers, insulation pieces and oversize two-tone down jackets. To encourage repeat visits, there will be limited-run items, drops and other offerings that are not widely available. To drum up interest, the company had a pop-up while the site as still under construction and sold out its limited offerings in three hours. Borrowing a page from streetwear brands like Supreme, The North Face had 9,000 shoppers register for the chance to shop at the pop-up and about 200 were selected via a sweepstakes-like system.

The outerwear specialist has committed to a two-year stay, but it is looking to have a permanent store in the neighborhood. Styles from its Copper Collection — jackets with metallic copper-like accents are displayed near the store’s entrance. Other streetwear-inspired looks can found in the back of the store where Black Series options are merchandised. That citified section includes highly technical sportswear from the Kazuki Kuraishi, who has an ongoing partnership with the brand. Retail prices for his designs range from $110 to $750.

Another area of the store focuses on The North Face’s Icon pieces like Mountain jackets and the Base Camp duffle that was first created in the Eighties. Tim Sedo, global brand director for Lifestyle, noted how the carry-on has been used for Himalayan treks and airport travels alike.

The North Face’s in-house team designed the store. The Williamsburg store is the third one to open this week, with Cherry Creek near Denver and Detroit being the others. The company has more than 60 full-priced freestanding stores and more than 50 outlet stores.

As a welcome to the neighborhood, The North Face plans to throw a black party Saturday in the store and its outdoor space with DJ performances and a live set by Brooklyn rapper Topaz Jones. “Currently, where we’re moving as a brand is really trying to unify this on and off mountain approach to exploration. Exploration is a mind-set for everybody,” Sedo said.

A community manager has been hired to lead activations in the space, which was designed with lightweight fixtures and display cases to ease any rearranging. To that end, the rapper Princess Nokia will talk about how exploration is a mind-set that applies to everyone. The brand has launched @thenorthface_city to keep shoppers up to speed about what’s new in Williamsburg.

Still in the pilot mode and fine-tuning its Renewal program online, which refurbishes North Face products, the company expects to bring that into stores eventually. The North Face executives declined to comment on projections for the Williamsburg store or how it is expected to rank among the company’s top-performing stores. The North Face’s vice president of direct to consumer Mark Parker said, “This isn’t just a test for us. All of our locations have to make profit so we have no loss leaders out there…We’re in business.”