The 8,000-square-foot store is designed to fit into the brand's outdoor-themed ethos.

The North Face store in Soho features an eco-friendly design.

NEW YORK — The North Face is setting up camp in SoHo.

On Friday, the brand will open a new 8,000-square-foot store at 584 Broadway between West Houston and Prince Streets that will serve as the roadmap for the redesign of the majority of its fleet over the next five years.

The SoHo store is designed to be a “base camp for exploration,” the company said, and is intended to establish a stronger connection with its consumer base.

“Our stores will continue to offer a convenient and seamless shopping experience, but it is no longer the sole mission of the store,” said Mark Parker, North Face’s vice president of direct to consumer. “We’re now focused on creating an environment that highlights our heritage and allows consumers to deeply connect with the brand as they prepare for their own exploration, wherever it may be.”

Upon entering, customers immediately see hanging displays for some of the brand’s signature products, including the Base Camp Duffel, which was created in 1978; the Nuptse Jacket from 1982; the Denali Fleece jacket from 1988; the Himalayan Suit from 1994, and the Mountain Jacket from 1995. 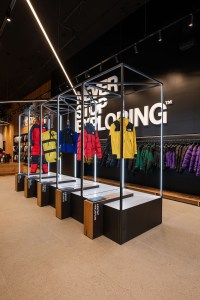 Scattered throughout the store are glass cases where products used by some of the brand’s sponsored athletes are on display, including the beaten-up duffel bag used by mountaineer Conrad Anker who has summited Mount Everest three times — once without supplemental oxygen and once by free climbing.

The store was created by using products that are long-lasting and won’t have to be refurbished within a few years. That includes Forest Stewardship Council-certified reclaimed wood, steel, granite and low volatile organic compound paints.

“This is a pivotal time in the company’s history and we’ve created a hub for exploration that will showcase our passion for the outdoors and our innovative products,” said Steve Lesnard, global vice president of marketing, who joined three months ago after a long career with Nike Inc. This will include Futurelight, a breathable-waterproof outerwear technology for outerwear, that will be revealed on Oct. 1.

The store features sections for the Thermoball collection of eco-conscious, packable outerwear made from post-consumer recycled materials; one for bags such as duffels, backpacks and luggage, and a New York City-specific collection of sweats and T-shirts also made from recycled products.

Behind the cash wrap are lockers where customers who order online can stash and pick up their orders.

Moving further back, there are areas devoted to trail running and hiking as well as heritage-inspired and lifestyle collections. There is also a small section for the Walls Are Meant for Climbing collection, developed for Global Climbing Day on Aug. 24. 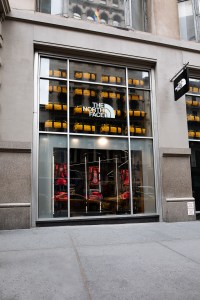 The North Face store is located on Broadway off Prince Street.  Courtesy Photo

The back of the store is devoted to outerwear, a hallmark of the brand, that will be expanded as the weather cools off. The jackets encircle a “campfire” experiential area where sales associates — or “guides” as they’re called — will work with customers to plan trips both near and far.

“The guides will add real value to our consumers and foster a state of community,” Lesnard said.

A few steps down from the main floor is a section devoted to the Summit Series merchandise, TNF’s top-tier collection of product that protects athletes from the most punishing environments.

The lower level features footwear as well as a dedicated women’s department with heritage and street-worthy product. Women’s represents around half the sales for the company and Lesnard said there is a “huge opportunity to make product more appealing to her.” Footwear is also a growing category for the brand, he added, one that The North Face will be putting more emphasis on going forward.

Here, too, is where the store spotlights equipment such as tents and sleeping bags. Guides will be available to help customers learn to pitch a tent and select other product they need for their specific outdoors adventures. “Consumers are telling us that they’re striving for exploration and want to get outdoors,” Lesnard said.

Lesnard declined to provide a volume projection for the store, but said he’s optimistic it will perform well. This marks the brand’s third store in Manhattan; there’s also one in Brooklyn.

Lesnard said the next store to get an updated design will be in Cherry Hill, N.J., in the next several weeks, followed by Seattle and then locations in Europe later this fall. The company said it is committed to refreshing the majority of its stores by the end of 2024 as a way to create “brand consistency,” Lesnard said.

Although brick-and-mortar retail has been experiencing challenges of late, Lesnard said the stores are profitable and serve a distinct purpose. “Our direct-to-consumer stores help elevate the brand,” he said. “But drawing traffic at retail today requires stores to be distinctive.”

To set itself apart, Lesnard said the store will host special events for product launches, speaker series and screenings of its outdoor films in addition to other events.

To celebrate the opening, a grand-opening event will be held on Saturday featuring limited-edition, custom Base Camp Duffel bags created in partnership with New York artists including Adam Lucas and Eric Haze, as well as sponsored athlete rock climber Renan Ozturk.

In the first quarter, The North Face’s parent company, VF Corp., reported a 9 percent increase in sales at the brand. The corporation doesn’t break out sales for each of its individual brands.