The e-tailer will celebrate its anniversary with the help of designers and brands like Alexander McQueen, Oscar de la Renta, and Nicholas Kirkwood. 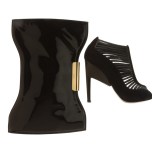 Chanel Iman has been tapped as the face of the collection, and will be featured in an accompanying global campaign. In addition, a video featuring seven industry insiders — Garance Doré, Leandra Medine, Alexandra Richards, Jessica Hart, Caroline Issa, Leigh Lezark and Harley Viera-Newton — will go live on the site April 22.

“You think five years isn’t a long time, but on the Internet five years is quite a lot of time, especially in the discount high-fashion space. It’s like dog years,” Stephanie Phair, president of The Outnet, told WWD.

Phair’s been at the helm of the company since its inception. She positions the discount and previous-season merchandise carried at Theoutnet.com through the lens of editorial partnerships and an editorial eye, she explained.

“It’s not a liquidation site. It’s not an online outlet. Our sister site Net-a-porter has always been known as a partner to the designers, and it’s all about editorial. We wanted to do a similar thing but for The Outnet,” said Phair, who, along with Shira Suveyke, vice president of global buying, was instrumental in facilitating the partnerships with the brands participating in the anniversary collection.

“We started the process of approaching and working together with these brands to select iconic pieces to be re-issued and become part of a collection that would represent our past five years,” said Suveyke.

The site has also seen a significant shift in its business model.

For Phair, being a partner to the brands in the online space is a priority as 80 percent of stock is bought directly from brands. This is a significant departure from the site upon its launch in 2009, when 90 percent of the merchandise came from Net-a-porter, with just 10 percent coming from brands directly. While Theoutnet.com began as an outlet for Net-a-porter — and it still remains the sole outlet for the luxury destination — it’s seen significant growth resulting from its work with brands. Industry sources estimate The Outnet’s sales to be about $150 million and steadily growing in the double digits.

“Outlet stock is bittier, but when we work with designers you can fill the gaps a lot more. You have more stock or can produce stock,” Phair added. “That is a credit to a strong buying team.”

Phair noted that The Outnet’s core customer — one who buys discount at a high-end level — is an extremely valuable one. She might have a different mind-set than those who prefer to go the full-price retail route, but she travels a lot. The Outnet’s customer travels, on average, nine times a year for leisure — and more than ever, brands are realizing this is an important woman to talk to. The limited-edition pieces speak to these relationships and “bring this together in one collection,” she said.

Currently, about 30 percent of the business comes from the U.S., followed by the U.K. and Australia. The fastest-growing markets, according to Phair, are Hong Kong, Singapore and Russia — but a key strategy in the near future is leveraging its already mature markets. In the U.S., for example, The Outnet has a strong presence and has put marketing efforts behind promoting the brand in New York and Los Angeles, but Phair also wants to tap into cities like San Francisco, Houston, Dallas, Palm Beach, Fla., and Miami.