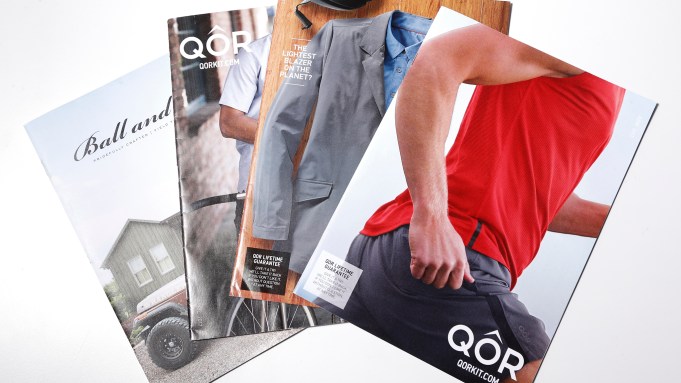 The Internet killed the mail-order catalogue.

In recent months, more and more companies have started to embrace the print catalogue as a new marketing tool intended to create a longer-lasting marketing imprint for their brands.

But this isn’t your grandfather’s Sears & Roebuck or J.C. Penney catalogue. Instead, labels such as Todd Snyder, Bonobos and Tommy Bahama have created beautiful print products that are more like art books than sales tools. But as attractive as they are, they’ve also been effective in driving sales, prompting more brands to jump on board.

According to the report written by Lois Brayfield, chief executive officer of J. Schmid & Associates, “print is impactful, interesting and powerful.” And customers are responding. Brayfield said response rates increased 43 percent from 2015 to 2016 and prospect response rates were up a whopping 190 percent. “So it’s no wonder that brands that have never mailed before are finding it a viable medium,” she wrote.

To cut through the clutter in the mailbox, innovative marketers are integrating smell, touch, taste, sound and even video into their mailers. And faced with ever-increasing competition from Amazon and other powerful online players, it is “imperative to create exclusive products that can only be found in your merchandise assortment,” she said.

But even without wafting aromas, catalogues are proving their worth. Although there was a 4.5 percent decrease in the overall number of catalogues mailed last year, there was a 23 percent increase in overall response rate, the report said.

Neil O’Keefe, senior vice president of CRM and member engagement for the DMA, said the use of print catalogues is most definitely a trend — “and they’re not going away. Catalogues and direct mail have never died, but their significance was reduced with the advent of the Internet” and cost increases for paper and mailings. So it’s no surprise that businesses shifted their marketing dollars to digital formats.

O’Keefe said when he worked for the Newport News catalogue earlier in his career, that brand mailed 5 million catalogues in one day in mid-April, and then followed it with smaller mailers two more times.

Today, this kind of volume seems excessive and brands are more likely to take an omnichannel approach to marketing. He said American Eagle Outfitters and its Aerie division, for example, “do a terrific job pulling all the channels together.”

Additionally, some companies have never abandoned print, O’Keefe said, pointing to Neiman Marcus, Bloomingdale’s, Restoration Hardware, Wayfair and others, which continue to send catalogues to their customers. Target and Costco are among the companies that personalize their mailings, employing “print on demand,” he said. “More retailers and brands are using catalogues, but they’re being smarter about whom they target. That’s where catalogues need to go in the future.”

Catalogues are effective in providing “a feeling” for a particular brand in a way that online efforts can never duplicate. “When you click on an e-mail, it takes you to the homepage and you get to a lot of thumbnail images. It’s not really sexy,” O’Keefe said. “But a catalogue can really represent your brand well.”

That’s the reason Todd Snyder decided to print a catalogue for his collection last holiday season. Snyder, who had worked at J.Crew before launching his own men’s wear line, said his initial thought was that catalogues were “a way of the past with the digital age and social media. But we tested one in December and it did incredibly well, so we did another one for spring.”

Snyder said catalogues are “a way to re-engage the customer” and are the “perfect vehicle” to represent the brand’s mission, which is to “help men dress better.”

The results are also tangible, he said. “It’s not just another e-mail they can delete. It sits on their coffee table. And with the reduced print options men have today, this fills a void.”

Snyder was careful that the catalogues were artfully photographed and printed on high-quality paper. “It has to be well done, not just, ‘Here’s what we carry,’” he said. “It needs to have its own voice and be done in an inspiring way.”

At J. Crew, he said, “it was all about density,” but the Todd Snyder catalogue is “more of a style guide and a look inside who we are.”

He printed only 100,000 copies, and as such it becomes just one of the tools he’s using to connect to customers, along with his retail store in New York and his online presence. “They all work together.”

There are ways to track the success of the catalogue by quantifying which customers placed an order after receiving the book. “We’re still trying to get the word out and we can’t afford traditional ads. And digital only tells part of the story,” Snyder said. “The catalogues are not cheap, but they pay for themselves.”

Andy Comer, the new head of marketing for Tommy Bahama, spearheaded what he called “the biggest and boldest statement we’ve ever made in print” for spring, producing a 132-page catalogue that brought together all of the brand’s product categories for the first time.

“We wanted to make a comprehensive statement about our brand, and doing a large-format, beautiful, widely distributed print piece integrated with the larger digital and in-store environment was perfect,” he said.

The “tactility of print is a perfect complement to our brand. There’s a lot of storytelling in there and it brings our brand story to life,” Comer added.

Although Tommy Bahama has produced catalogues in the past, the spring book, titled “The Island Life,” was its largest ever, mailed to nearly 1 million households, 100,000 of which were new to the brand.

“And we’re seeing the numbers come back,” he said. The company’s store associates relate that people will come in carrying the catalogue and asking for particular products featured, Comer said. Many of those are making large purchases of $1,500 to $2,000.

Additionally, he said customers are searching items on the web that were specifically featured in the print piece and then buying them on the brand’s e-commerce site, providing further proof that the catalogue served its intended purpose.

In fact, it was so successful that “Live the Island Life” will replace “Make Life One Long Weekend” as Tommy Bahama’s tagline going forward.

Comer said employing a catalogue bucks conventional wisdom, “but we found a marketing recipe that works for us. And the numbers tell us it’s something we need to do more of.”

Joe Teno, founder and chief executive officer of Qor, a men’s ath-leisure brand, launched his company with only catalogues and an e-commerce site three years ago. The former ceo of Athleta who had also worked for L.L. Bean and TravelSmith, Teno believes that catalogues were — and are — a powerful, underused tool.

“They’re drivers of interest and create a connection with a brand,” he said. “It’s a way to bring people to the web site and adds context. It works very well.”

The results they produce are immediately measurable, he said, and allow a company to quickly react to whatever is trending. “You can’t do that with retail or wholesale,” Teno said. “With a catalogue, you just spend a little more on paper and print time.”

Qor currently produces 5 million catalogues annually — one a month — that allow the company to effectively communicate its message, which is to encourage people to be active while still looking good and feeling comfortable.

“The fundamentals of a catalogue is that it can sit next to you and be a resource at any time,” he said. “In the digital world we live in, that’s something different. And it’s difficult to play in a purely digital world without having a little something-something.”

Faherty, a casual men’s and women’s wear label, has been producing catalogues since holiday 2015 and now prints four a year: spring, summer, fall and holiday.

“We mail out our catalogue to current customers and prospective customers,” said Kerry Faherty, brand president. “But we also display them in all of our six stores, as well as local coffee shops, and distribute them on our trailer tour that we take around the country. We’ll also send them to our wholesalers, who can leave them on their counter to educate their customer about the brand.”

Faherty said she views the catalogue as a place to not only showcase product but also as an “opportunity to tell a comprehensive story of who we are as a brand, what we believe in, the people we love, and the places we love to go. As a lifestyle brand, a catalogue is an amazing opportunity for storytelling.”

As a result, the brand, whose ethos centers around a beach lifestyle, has shot its catalogue in Montauk, N.Y., Old Town San Juan in Puerto Rico, the founders’ home town of Spring Lake, N.J., a friend’s farm in Connecticut and Malibu/Topanga Canyon in California, where it has a store.

The most recent catalogue was shot in Haiti in partnership with Artists for Peace & Justice and 5 percent of all online, catalogue and in-store sales through June 30 will be donated to the organization with a goal of raising $50,000 to sponsor a classroom at APJ’s primary school in Port Au Prince.

Ball and Buck, an American-made men’s wear brand targeted to upscale sportsmen, tested a catalogue last fall by teaming with Covey Rise, a niche magazine for upland hunters, and doing “a ride along,” where its catalogue was sent to readers along with the publication, according to Ball and Buck founder Mark Bollman.

“Our product is premium — shirts for $120 — so our fundamental goal is to get the book into the hands of our customers,” he said.

And it worked, Bollman said — so much so that Ball and Buck opted to go it alone for spring when it sent out around 30,000 catalogues.

“This isn’t a volume play for us,” Bollman said. “We just want to go deeper in wallet share with our existing customers and establish new customers.” He said the brand has set up mobile stores at trade shows and hunting-skewed events around the country that attract hundreds of potential customers. “Tons of people come and we give them our catalogue so they can take it home,” Bollman said.

The print piece also appeals to the older, well-heeled men who are “50, 60, 70 years old who aren’t on Facebook or Instagram but who have a $1 million collection of firearms. They’re very difficult to access but this is a price of entry to gain them as customers.”

Bollman acknowledged that in the Internet age, shopping via catalogue is very “old school.” But it’s also a “surprisingly effective marketing tool for brands. There really is value in taking your product off the screen and putting it into the living room.”