The Chicago location will be slightly larger than its current largest in Los Angeles, seen here.

The RealReal on Tuesday said it plans to build out its retail network with stores in San Francisco and Chicago, bowing this spring and summer, respectively.

An 8,000-square-foot, two-level unit will be unveiled at 253 Post Street on Union Square in San Francisco, the former address of Hermès. With entrances on Post Street and Maiden Lane, the store will be in the back yard of the San Francisco-based luxury resale e-commerce site.

At 12,000 square feet, the two-level Chicago flagship opening at 940 North Michigan Avenue will be slightly bigger than The RealReal’s West Hollywood location, which is its largest unit to date. The RealReal is hoping the clients of well-heeled Magnificent Mile neighbors such as Gucci and Louis Vuitton become consignors when they tire of their full-price purchases, and maybe even shoppers.

“When we’re adjacent to other businesses, such as a well-performing Gucci store as in SoHo, we see interest in the brand go up,” said Mike Groffenberger, The RealReal’s head of retail. “Nobody is shopping at one store exclusively. We see customers going back and forth [between resale and full price].”

Both stores will feature CafeCafes, and offer valuation services and consignment drop-off.

Chicago, one of the first launch cities for The RealReal, has consistently been a strong market, Groffenberger said. He added, “We’re excited about the presence we’re going to build there. It’s one of the biggest cities in the country, and we wanted to have space to bring to life our full lifestyle assortment for all categories, and offer luxury consignment services.”

The RealReal also posted fourth-quarter results on Tuesday that illustrated the momentum it brought into 2020.

Fourth-quarter revenues rose 57 percent to $97.3 million, representing a total gross merchandise volume of $303 million. But the company has yet to translate that growth into profits. Net losses improved somewhat, to $21.4 million from $25.4 million a year earlier.

For the full year, revenues increased 53 percent to $318 million with a gross merchandise volume of $1 billion and losses of $100 million.

The RealReal’s three stores in West Hollywood, Madison Avenue and SoHo generated about $150 million of value to the marketplace, including $65 million in demand and around $85 million in supply. The company on Tuesday said the SoHo store’s GMV growth rate in the fourth quarter was 36 percent, year-over-year, which is just slightly below the total GMV growth rate in the period, pointing out that this is only the third year of operation for the store.

Men’s and women’s fashion will be merchandised on the same floor in Chicago, where women’s is seen as over-indexing, particularly in apparel and accessories, with top brands expected to include Gucci, Saint Laurent, Balenciaga and Brunello Cucinelli, along with heritage labels such as Burberry.

“As that mix of brands suggests, Chicagoans love to dress up and love a strong statement look, but they also invest in timeless classics,” a spokeswoman said, noting that a select assortment of secondhand and vintage furniture, art and decor, and watches and jewelry will be featured at the store. 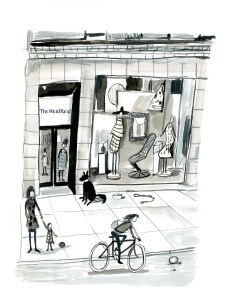 An illustration of The RealReal unit opening in Chicago.

“We’re trying to build a relationship with the local community,” Groffenberger said. “We’ll incorporate local artists into [the store] design, and will use local vendors for our cafés.

“We’re opportunistic about how we’re growing our retail strategy,” Groffenberger added. “We’re balancing the right opportunity with the right location, and making sure we’re focusing on growing markets with strong customers and consignors. We’re going to be judicious about it, and open one to two per year. High Street locations have worked well for us.”