Barneys Japan Co.’s expansive new store in Ginza is its third unit in the country and is projected to do $45 million in first-year sales. 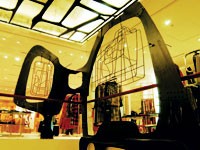 TOKYO — Whether it’s the outlandish, hopped-up fashion of the Shibuya girls or the refined, designer looks of the moneyed set, one thing is certain: Japanese women love to flaunt their style. And it was fully on display at the opening of Barneys Japan Co.’s expansive new store in Ginza, where VIP shoppers turned up in lace tops, cuffed jeans, sandals festooned with feathers and Birkin bags in hand. Their male counterparts provided the perfect balance, filling the room with slim, dark suits.

Barneys Japan president Naoki Nakamura graciously greeted each arriving guest. Amidst the trays of champagne and perfectly bite-size hors d’oeuvres, partygoers milled about the store which, despite the distance and the different ownership, has the same air of sophisticated whimsy as its American forebear.

“It screams Barneys to me,” said Simon Doonan, the U.S. company’s creative director, who was fresh off a flight from New York to help host the opening.

The 30,000-square-foot Ginza store marks the third Barneys New York unit in Tokyo — the other two are located in the Shinjuku and Yokohama districts. It’s the first new store for Barneys in Japan in a decade and takes the store design to the next level.

“We wanted to raise the profile of Barneys across Japan with this third store opening,” explained Nakamura. “The store design is based on what was already established with Barneys New York.

“The Ginza area attracts a very mature customer,” he added. “They have an acquired taste. There are many important luxury brands in the neighborhood and in an effort to maintain Barneys’ status, we are introducing new designers to differentiate ourselves in this market.”

The new Barneys is down the block from a Salvatore Ferragamo store and near units of Prada and Lanvin.

The store’s designer mix includes many of the same labels carried in the U.S. stores like Balenciaga, Jil Sander, Lanvin, Rochas, Narciso Rodriguez, Derek Lam, Alexander McQueen (new to Japan) and Proenza Schouler. However, the new store is also carrying brands like Meyers Swiss watches and has created a counter for Stephen Webster jewelry, neither of which is carried in the U.S. stores.

“They buy the fashion differently from us, and when we first opened we kept telling them how to buy it,” said Doonan. “But bit by bit we realized there were cultural differences. They tend to buy things more jacket-y and sportswear-y. With a line like Lanvin, for example, [in the U.S.] we have a lot of cocktail dresses. Here, they were quite sporty and tweedy with their Lanvin buy.”

Nakamura’s forecast for first-year store sales is approximately $45 million. He estimates that the Shinjuku store pulls in about $65 million annually and the Yokohama store about $40 million.

“They deserve a great deal of credit for being so innovative and creative,” said Howard Socol, chairman, president and chief executive officer of Barneys New York. “We’ve been partners for a good deal of time. It started with a very good foundation of Barneys in New York and Barneys in Japan working together. Obviously they have found it successful, and they’ve just continued to grow. Their growth continues to broaden our brand image and our aura.”

Situated in the historic Kojun Building, the store spans three levels — the basement and the first two floors. “It is still very Barneys,” said the project’s designer, Jeffrey Hutchison of Jeffrey Hutchison & Associates LLC. “We wanted to create the next-generation store, to take the evolution of their brand to the next level.”

To that end Hutchison forged a luxe environment replete with a striking central staircase of rosewood and limestone which, in tandem with a massive steel sculpture, winds its way up three floors. Along with rich elements such as limestone floors with marble mosaic borders, dark cerused oak walls and antique brass, one of the space’s standout features is an extensive array of applied art — from the sculpture (built in Hokkaido) to mosaics and murals, all of which were created by the artist John-Paul Philippe.

“Barneys has always used a high degree of decorative art in the vein of playful murals,” said Hutchison. “I felt this was a real opportunity to make it three-dimensional and sculptural.”

The murals and mosaics are sprinkled throughout the store and serve not only as decoration, but also as dividers for different merchandise niches.

“Applied art is something you don’t see a lot of these days,” explained Doonan. “The most retailers will do is plonk art in their building entry, but to do it as part and parcel of the architecture is really a concern that is a Barneys trademark.”

Clearly the Barneys New York formula is working for both the U.S. and Asian markets. Though their ownership is different these days (Barneys Japan is owned and operated by Isetan), the two companies maintain a symbiotic relationship, trading and consulting with each other on the creative, design and fashion fronts.

“They want to know what windows we did, if we’re buying new mannequins and which ones,” said Doonan. “They want to adhere to the Barneys point of view as much as possible.”