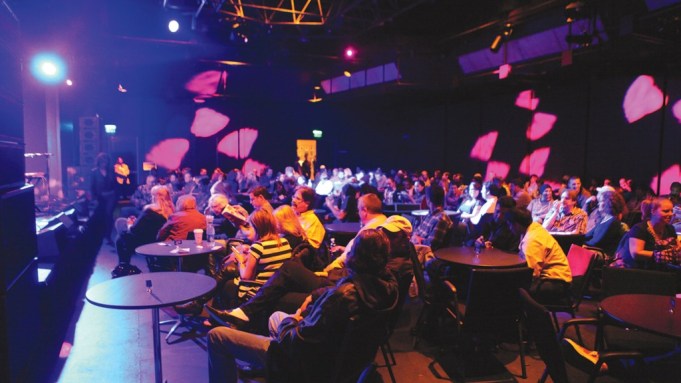 A lover of the arts in both the public and private sectors, Henry Segerstrom has demonstrated a decades-long commitment to nurturing the cultural life of Southern California through gifts of land and funds, along with commissions of architecture and environmental sculpture for public enjoyment by such renowned artists as Isamu Noguchi, Richard Serra, Henry Moore, Alexander Calder, Joan Miró, and Jean Dubuffet.

“I feel fortunate to have been so close to so many of these great artists. These men became friends, not just associates. Some, like Henry Moore, we were just lucky to meet in New York,” said Segerstrom. “They were wonderful human beings and there’s something about their instinctive commitment to something new and different that I’ve always liked in dealing with sculptors.”

His love for the arts was fostered by his mother, Nellie Ruth, who made sure he had elocution lessons and performed in grade-school plays.

“I think my earliest recollection was when I was in grammar school and we had to build a [replica of a] bridge, so I picked the London Bridge with its beautiful architecture. I was probably seven or eight years old and I remember building my bridge and I loved it. I think there was something natural in me in my feeling toward artistic substances,” recalled Segerstrom.

Later on, when his older sister, Ruth Ann, attended Scripps College in Claremont, Calif., he remembers being struck by the classic and modern architecture on the campus. “That was really eye-opening for me,” he said.

The Center is the artistic home for Pacific Symphony, the Philharmonic Society of Orange County and the Pacific Chorale.

In addition, its Lawrence and Kristina Dodge Education Center includes the studio performance space and Boeing Education Lab as well as the offices for the Center’s education department. Other features include two private donor rooms, Leatherby’s Café Rouge and the informal Plaza Café. The performance venues, enclosed in architecturally stunning theaters, all feature impeccable acoustics and such artist amenities as dressing rooms, lounges, practice suites and rehearsal studios.

The Center’s international dance programs have earned it a reputation as one of the leading presenters of dance in the country, particularly ballet, with frequent collaborations with the Bolshoi Ballet, the Mariinsky Ballet, the New York City Ballet, the Royal Ballet, the Merce Cunningham Dance Company, among others. The Center’s long-standing relationship with the American Ballet Theatre was celebrated this spring by the world premiere of Alexei Ratmansky’s “Firebird,” its 22nd collaboration.

In the late Sixties, a number of Orange County community leaders, including Segerstrom, decided it was time for their community to have a world-class performing arts venue. The region’s population had grown, businesses were thriving and major educational institutions were being established. Two of the county’s existing artistic organizations — the Philharmonic Society of Orange County and Pacific Symphony — needed a concert hall with seating and acoustics appropriate to the caliber of their performances and a setting in which to grow.

In the mid-Seventies, the Segerstroms donated a five-acre site for the arts complex. It was also determined that the new performing arts complex would be built entirely through private funding; it was the first such organization of its scope in the country to be privately funded. Charles Lawrence served as lead architect and Dr. A. Harold Marshall, Dennis Paoletti and Jerald R. Hyde designed the acoustics.

Around the same time, a gift of land from the Segerstrom family enabled the Tony Award-winning South Coast Repertory to open a new theater in Costa Mesa in 1978 and set the stage for the subsequent creation of the arts complex. (In 2002, SCR opened an expanded facility on the campus, the Folino Theatre Center, encompassing the 507-seat Segerstrom Stage, the 336-seat Julianne Argyros Stage and the Nicholas Studio.)

The vision of the Center’s founders became reality on Sept. 29, 1986, when Segerstrom Hall — one of the nation’s most innovative and technically advanced homes for the performing arts — opened its doors to the public. Soprano Leontyne Price inaugurated the venue by singing the “Star Spangled Banner” with Zubin Mehta conducting the Los Angeles Philharmonic.

In a move to consolidate the leadership of the Center’s governing structure, its by-laws were revised in May 1987 to combine the trustees with the board of directors. Heading the restructured board as the first chairman and chief executive officer was Henry Segerstrom.

In 1998, the Segerstrom family donated an additional parcel of land to the Center for the purpose of constructing another concert hall, a multiuse theater, an education center, public restaurant and community plaza. Segerstrom hand-picked architect Cesar Pelli for the concert hall and for the SCR renovation.

Pelli, who also designed the IBM Tower in Town Center, met Henry 40 years ago when he was a partner at Gruen Associates, the firm that designed the original South Coast Plaza. “We established an excellent relationship there,” said Pelli.

When Pelli moved to the East Coast and started his own firm, Henry asked him to design the IBM Tower and the other two projects.

“Henry is an ideal client because he is extremely well-informed. He knows a lot about architecture, much more than he pretends to know. We can have very high-level discussions. He is also extremely generous and conscious, an old-world gentleman. It’s extraordinary.”

For the Concert Hall, they worked closely with acousticians Russell Johnson and Damian Doria of Artec Consultants Inc., and landscape architect Peter Walker and Partners was also enlisted for the project.

“We wanted the hall to have fantastic acoustics,” Pelli said. “It is much more important for the musicians to hear than it is for the audience, because if they can’t hear each other properly, they can’t work well together. Henry understood this. It is so easy to work with him because he understands these subtle issues more than anyone.”

Another major step toward the completion of the founders’ original vision came when, in August 2000, Henry Segerstrom provided the lead gift of $40 million to the Center’s $200 million capital campaign. This was the largest charitable cash gift in the history of Orange County. In recognition of this cornerstone gift, the new concert hall was named the Renée and Henry Segerstrom Concert Hall after Henry and his second wife, who died earlier that year. The 500-seat theater was designated Samueli Theater in recognition of the $10 million gift from the Henry Samueli family.

“It wasn’t only money gifts,” said Segerstrom of his gifts over the years. “It was the value of the land. When you figure out the value of 14 acres of land using the value that the city of Newport Beach paid for their land, that 14 acres could be worth $75 million, and our cash contributions from the beginning are probably around $80 million, which means the total cash plus the sites cost $150 million. The Dorothy Chandler Pavilion [in Los Angeles’ Music Center] cost $33 million.”

Groundbreaking for the expanded center took place on Feb., 6, 2003 with a concert by Pacific Symphony in Segerstrom Hall followed by fireworks and three backhoes synchronized to make the first official digs on the construction site.

The center and the community experienced a milestone year in 2006. In April, the Center announced Terrence W. Dwyer as its new president. Dwyer had previously served as managing director of two of the nation’s preeminent theaters — the La Jolla Playhouse and Houston’s Alley Theatre. That same month, Elizabeth and Henry Segerstrom commissioned “Connector” from Richard Serra, a 66-foot steel sculpture that was installed on the new community plaza that unites the Center’s original structure with the newer venues. On Sept. 14, California Governor Arnold Schwarzenegger and a host of other state and local dignitaries participated in a community dedication ceremony in the concert hall.

The highlight of the year came the next day, when the Center inaugurated the Renée and Henry Segerstrom Concert Hall with a concert by Pacific Symphony, led by its music director, Carl St. Clair. Featuring Plácido Domingo singing the world premiere of “Canciones de Lorca” by composer William Bolcom, the evening also included performances by Pacific Chorale.

The opening celebrations featured galas, recitals and concerts by the Center and its resident companies, a community day enjoyed by 10,000 people and an unprecedented residency by Russia’s Kirov Orchestra, Opera and Ballet. The Kirov companies were led by their artistic director Valery Gergiev. Performances included the North American premiere of the Opera’s production of Wagner’s “Ring Cycle,” Mussorgsky’s “Boris Godunov,” the ballets Romeo and Juliet and Swan Lake, and concerts featuring the combined Kirov Orchestra and Pacific Symphony. Maestros Gergiev and St. Clair shared the podium.

Samueli Theater opened with a concert by Sheryl Crow, a performance by Camp Freddy and a recital by young opera singers of the Kirov Theatre Conservatory. During this same period, the Center also celebrated its 20th anniversary. A festive evening was marked by a sold-out concert in Segerstrom Hall by Tony Bennett.

On Jan. 12, 2011, the 14-acre Center changed its name to Segerstrom Center for the Arts. Segerstrom Center comprises the producing-presenting institution itself and two other major arts organizations, plus South Coast Repertory and the Folino Theater Center. The 2011-12 Season was the Center’s 25th anniversary year.

Besides offering a broad spectrum of regional, national and international programming, the Center has one of the nation’s highly regarded departments of education and community programs and has affected the lives of more than eight million young people and educators. Each year, some 375,000 elementary, middle, high school and college students and educators attend a Center arts-in-education program such as the Center’s Arts Teach, ArtsConnect, Summer at the Center, Masters at the Center and others. Founders Plus, one of the Performing Arts Center’s many support groups, helps to distribute thousands of free tickets to students and the underserved each year.

There’s still more on tap.  Segerstrom Center is also the future site of the Orange County Museum of Art. Segerstrom has been in negotiations with board members of the museum for its move to this site since the mid-Nineties. A museum-condominium tower project is working its way through the Costa Mesa Planning Commission and is expected to be considered by the City Council this fall.

“Elizabeth and I are very interested in seeing the completion of Segerstrom Center for the Arts with the art museum. We are going to get started at some point this year,” he said. As he knows first hand from amassing his own private art collection, “You don’t make a collection over a period of two years, it takes 20.”