BEAT: Phat Farm has joined the growing roster of hip-hop brands at eFashionSolutions.com, a Web marketer and retailer for the urban market. 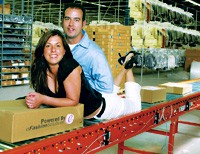 The site, founded by Jennifer and Ed Foy, acts as a Web marketer and retailer for 14 brands — more than half of them catering to the hip-hop, urban market. Not that the Foys set out to target that market specifically. “The first client we signed on was XOXO,” Ed Foy said. “We saw the urban trend happening, but it wasn’t until we signed Baby Phat as a partner four years ago that we knew we could really service the trend.”

Jennifer and Ed Foy met as colleagues at Calvin Klein Jeans in 1995. They married in 2000. Soon after, Ed wanted to leave the wholesale business to create an online shopping portal. Jennifer, who rose through the ranks at Bill Blass and Rio Jeans, knew he was on to something but thought it might be too much to accomplish, so she tweaked his idea.

“We really needed to build the Internet around existing brands,” she said. “There needed to be a certain level of brand awareness. Without it, the Web site wouldn’t work.”

The way the site works is that consumers browsing for,

“We manage the entire process,” Ed said. “From the tech side to the payment process to fulfillment, shipping and returns, we’re a big e-commerce center where every part involved is fulfilled from one center.” This fact has led the company to boast impressive numbers.

Chris Leogrande, vice president of buying and planning at eFashionSolutions.com, met the Foys at Calvin Klein. “I’ve been with the company for two years,” Leogrande said, “and we’ve consistently seen growth that outpaces retailers’ performance for the brand.”

Rocawear, in its first year partnering with the site, saw its online business grow 171 percent. Baby Phat, one of the site’s first clients, has consistently brought in online sales in excess of $5 million annually. “Kimora [Lee Simmons] wants a full assortment of everything off line put online,” Jennifer said, referring to the president and creative director of Baby Phat.

“EFashionSolutions.com was very aware of who we were and what we needed in an online partner,” said Marcie Corbett, president of Phat Licensing. “They have retail backgrounds and, most importantly, they concentrate on inventory reports and know what people like and are reordering.”

Tracking returns, or better yet, the reasons for returns, is an invaluable tool that retailers, for the most part, can’t provide. “We noticed that the return rate for a particular JLo product was 30 percent. Typically, it’s 20 to 23 percent. We told the manufacturer that the fit was the problem, and now the return rate is less than 15 percent,” Ed said. After all, if the fit is off and there’s no sale, the Web site doesn’t get paid. “We’re completely performance-based,” Jennifer added.

EFashionSolutions.com also allows for brands to retain 60 percent of the retail sale. “This is the importance of the Internet,” Jennifer said. “The brands get higher profit margins.”

“Their revenue model seems to be working very well,” said Bernt Ullmann, president of Phat Fashions, the holding company that runs Baby Phat and Phat Farm. “They have a substantial database, and they truly work as an extension of us.”

Before phatfarm.com was powered by eFashionSolutions.com, it was maintained by the staff at the Phat Farm freestanding store here in SoHo. “We’re growing and taking the business to the next level,” he said. “Clearly, we are anticipating substantial increases in our Web-based business.”

Jennifer hopes all the companies adopt the same sensibility. “We really want the brands to treat us as their flagship store,” she said.

“We have a store in New York and a store in Moscow, but this is a place where anyone can reach us,” said Andy Hilfiger, co-founder and director of Sweetface Fashion Co., the masterbrand company for JLo. With more than half of the brands listed on the site catering to the urban lifestyle, the obvious question is, is there healthy competition?

“Well, Rocawear and JLo target different customers,” Hilfiger said. “But competition can be good.” If competition does exist, why not use it to your advantage? Hilfiger added, “If someone goes to eFashionSolutions.com looking for someone else, they can also find us.”