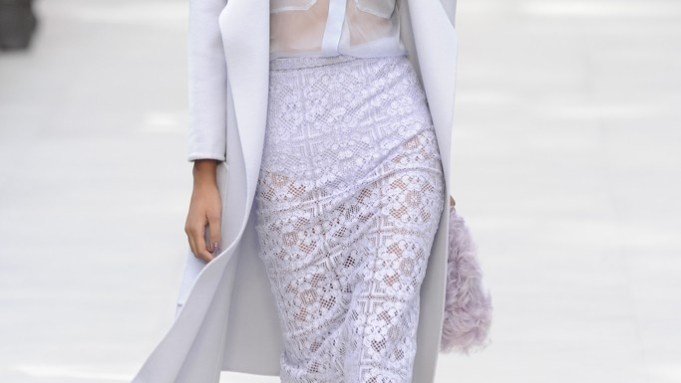 For many of the hundreds of international brands carried, El Palacio de Hierro has been the gateway to Mexico and Latin America.

Pietro Beccari, chief executive officer, Fendi: “Fendi has been working with Palacio de Hierro since 2011. We currently own three boutiques within their department stores and sell our collection in a total of six wholesale points of sale. The launch of our Fendi boutique in El Palacio went extraordinarily well. Within the upcoming months, we hope to open new doors to consolidate our business.

“El Palacio’s luxury areas are very strong, and they continue to elevate their positioning year after year. They are an unquestionable leader in the Latin American market, with a legacy that has made the brand a true consumer landmark in Mexico.”

Jan Heppe, president of the Americas, Burberry: “Our long-standing relationship with El Palacio de Hierro has played a significant part in developing Burberry’s footprint across Mexico, working closely with their outstanding team to offer an assortment tailored to the climate and tastes of luxury customers across more than 11 key locations. We look forward to continuing to partner with El Palacio de Hierro to unlock future growth opportunities in this dynamic, high-growth market.”

Daniel Rachmanis, senior vice president for Latin America, the Estée Lauder Cos. Inc.: “El Palacio de Hierro is synonymous with luxury and prestige beauty in Mexico. That’s why the Estée Lauder Cos. chose to partner with them when we opened our first doors in Mexico in 1969. And it’s because of El Palacio’s high-end positioning that we sell some of our most luxurious brands exclusively there, like Crème de la Mer, Jo Malone and Tom Ford.

“Our long partnership with El Palacio de Hierro goes beyond business, too. We are also partners in important social responsibility efforts like the MAC AIDS Fund, World Oceans Day [a partnership between Oceana and La Mer] and the Estée Lauder Cos.’ Breast Cancer Awareness Campaign.”

Andrea Morante, ceo, Pomellato: “Pomellato is present in two El Palacio de Hierro locations in Mexico City. Both doors are branded concept corners [and opened in 2012]. We always felt that El Palacio represents the best gateway to the Mexican market, and….Sales performances are very encouraging and in line with our best first-year estimates in a totally new market for Pomellato.

“The customer profile is similar to Pomellato clientele found around the world. Within El Palacio de Hierro, Pomellato has been welcomed by customers already familiar with our brand and, perhaps most importantly, by new clients. The two corners have a broad assortment of Pomellato’s collections with a focus on our most identifiable and international best-selling lines, such as Nudo, Capri, Victoria, M’ama non M’ama, Sabbia and Tango.

“The first point of sale that we opened for Dodo in Mexico was at the new Interlomas El Palacio de Hierro in November 2011. We opened another corner at El Palacio in the Sante Fe mall.

“There is no doubt that El Palacio de Hierro is the ideal partner for Dodo not only to expand the brand in the important Mexican market but also to test the wider Latin American acceptance for the Dodo product.”

Sophie Rietdyk, president of international & licensing, BCBG Max Azria Group: “We have been working with El Palacio for over 12 years. We have key locations on the contemporary floor with in-store shop concepts averaging around 500 square feet. Our brand has flourished through the years in this environment. Due to its proximity to the U.S., Mexico is the leading market in Latin America, and El Palacio has been very successful at establishing itself as the most upscale and successful department store in Latin America. However, the assortment we offer there is very similar to the assortment one could find in Bloomingdale’s or Saks in the U.S. We stay consistent in our offerings around the world. Mexico is definitely the fashion window to Latin America. So our presence in Palacio is certainly helping us with our expansion in the rest of the region.”

Bud Konheim, ceo, Nicole Miller: “El Palacio symbolizes the best of Latin American department stores, and they are hard to find. It’s Mexican, but it really caters to Latin American shoppers. That region is really one of European-type boutiques or just boutiques. The main thing is if your clothing appeals to the culture of South America, Brazil included, then you want to find real leaders to buy it and distribute. El Palacio is just about as good as anybody. They operate like an American department store, but they’ve got the sensibility of catering to the boutique customer.”

Karen Watkins, executive vice president, Dior USA: “Dior has been in El Palacio for more than seven years in two venues — Perisur and Santa Fe. We have recently expanded and remodeled our Santa Fe and Perisur boutiques, adding a market-specific assortment to each. The boutiques feature handbags and accessories, including our Lady Dior with the addition of timepieces in Santa Fe.”

Yvette Reynoso de Gomez, director of Mexico and Latin America, Guess: “Guess has been working with El Palacio de Hierro since 2008. We’re in all its locations [with] both in-store shops and generic shop concepts. The customers who shop there are fashion-savvy and understand the latest trends. We have been able to establish a loyal customer niche. The Latin American consumer [appreciates Guess because] it is sexy, young and aspirational.

“Mexico has set the tone of how we approach the Latin American market. Aside from geography, Mexico is the most similar to North American business and fashion trends. Having been established in Mexico for seven solid years, we have learned important business lessons of what to do and what not to do.

“Although Mexico is similar to North America, there is a percentage [of merchandise] that has to adapt to the local market needs. As you travel further south into Central and South America, the business and fashion trends become even more specific. Navigating through this business and fashion terrain is what makes Mexico the gateway to markets like Brazil; never losing sight of the brand’s DNA, all the while adapting to the divergent market needs.”

Greg Morel, president of International, Camuto Group: “El Palacio is a first-class retailer, and its ability to deliver quality fashion brands to the Mexican consumer is exemplary. We introduced Vince Camuto and Jessica Simpson footwear two years ago and look forward to continued partnership and growth within the market.”