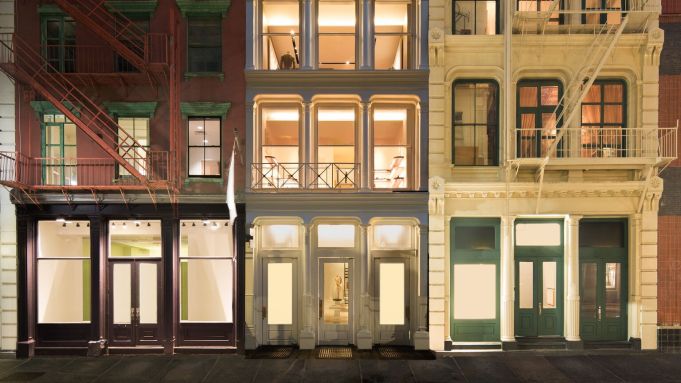 NEW YORK — Laure Hériard Dubreuil is finally ready to share her labor of love with the world.

Four years and several millions of dollars later, The Webster will open the doors to its six-story, 12,000-square-foot store in the heart of SoHo’s Cast Iron Historic District today.

Hériard Dubreuil, cofounder and president of the retailer, spent $6.1 million in 2013 to purchase the building at 29 Greene Street between Grand and Canal Streets and has spent the time since gaining approval from the city to renovate the building and convert it into her latest flagship.

The building, which dates to 1878, had only one usable floor when Hériard Dubreuil purchased it; the rest had burned in a fire in the Forties and had never been restored. So she worked with the Landmarks Preservation Commission to restore it to its original glory and add a penthouse on the sixth floor, complete with an outdoor terrace.

“This block has the most pristine cast iron buildings in the world,” she said. “It was nice to have the support of the landmarks commission because this building has such an amazing heritage.”

The store was designed in partnership with Christopher Osvai of the Osvai Architectural Consulting and Design firm, who also worked on The Webster’s stores in Miami and Bal Harbour, Fla., and Houston. It boasts many of the same characteristics as the retailer’s South Beach flagship such as its Art Deco furnishings, marble terrazzo floors, vintage floral and geometric wallpapers from the Twenties and Thirties and velvet serpentine banquettes that all combine to provide an overall residential feel. Pink marble that first made its appearance at The Webster in South Coast Plaza in Costa Mesa, Calif., is used in accents on cases and elsewhere, and aubergine metal and glass vitrines are intended to be a nod to the construction of the New York subway system.

And the store’s signature orange blossom scent wafts through the building.

“It’s very important that it had the codes of The Webster’s DNA but in a New York way,” Hériard Dubreuil said. “It really feels like a home.”

Although six stories high, the building is quite narrow, providing a sense of coziness that Hériard Dubreuil embraced.

Upon entering, customers will find that the original wooden beams and brick wall — now painted white — have been retained. The ground floor is home to an assortment of gifts, accessories, home goods, sunglasses, fragrances, candles and a children’s department in the rear.

Colorful shelves specifically for the store are perched on the wall inside the main entrance. In the children’s department is an elaborate piece of art that will hold some of the kids’ merchandise and in the rear of the floor is a special Art Deco painting on glass of tropical waves, another Miami reference.

Hériard Dubreuil’s love of art is evident throughout the space. Among those who were commissioned to provide pieces for the store are Miriam Ellner, Gaetano Pesce, Rogan Gregory, who created a bronze flamingo sculpture (a signature of the Miami store), Guy Bourdin, Roger Landault, Maxi Cohen and Laszlo Moholy-Nagy.

Her husband, Aaron Young, provided a sculpture of an arm that is attached to a wall in the men’s department. “He’s my lucky charm,” Hériard Dubreuil said.

The second floor is home to The Webster’s first shoe salon and also houses women’s wear. The back of the floor is bathed in natural light thanks to a skylight that was uncovered during the renovation.

The third floor is similar to The Webster’s second floor in Miami, she said, and houses more-formal women’s wear. Walking off the elevator, visitors run smack into a video installation of waterfalls that helps set the mood.

The fourth floor is devoted to men’s wear, both casual and dress, as well as accessories. The decor here is masculine yet complementary to the rest of the design and includes chairs from the lounge of the Concord airplane.

The fifth floor will be home to a 1,600-square-foot David Mallett salon, his third overall and first outside of Paris, but that won’t be ready until early next year.

While each floor has a distinct feel, the piece de resistance is the sixth floor VIP area. The foyer outside the elevator has special handwoven peacock chairs, and the sitting area next to the outside terrace has Seventies-era tables and a shag carpet. “It’s my Scarface moment,” she said.

She said this week will be used for a soft opening before The Webster aggressively reaches out to its clients to let them know it’s ready to welcome them to its new home in New York.

“It’s not going to be full-on perfect, so we’ll take this week for the team to get used to everything,” she added. “We wanted to open before the holidays, but we waited for four years for this to formally open so we’re going to take our time.”

Although she acknowledges that the retail climate isn’t easy, she is expecting good things from the New York store. In fact, she’s even had to turn some clients away who are itching to get inside. “I’ve been guarding the door,” she said with a laugh.

Hériard Dubreuil declined to provide a projected volume figure for the store, saying only, “I hope we do more than projected. We’re keeping our fingers crossed. Our clients asked us to open in New York so I feel very comfortable.

“I really put my heart into this store,” she continued, “it’s really genuine and organic — it’s like my house. It’s not dressed to impress, but you can come in, sit down, take off your shoes and touch and feel everything.”

The Webster started life in South Beach in 2009. The Miami store is the largest in the fleet at 20,000 square feet and also required a massive renovation since it too is located in a historic building. But the New York project was even bigger since it required a complete overhaul and the addition of another floor.

“It’s smaller than Miami, but it’s definitely our biggest project,” she said.