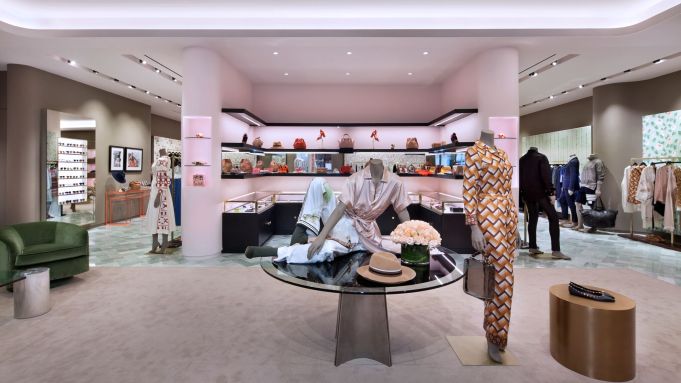 LOS ANGELES — The Webster is thinking pink for the unveiling of its first West Coast boutique.

The influential specialty store, which has become a destination for both brands that strive to wholesale to selective retailers and customers who yearn for its curated taste, is marking this week’s opening of its store in South Coast Plaza with a marble facade, sunglasses and shark tooth jewelry — all tinted in its signature hue that evokes the flamingos populating its home base of Miami.

This is the fourth outpost in the retailer’s network, which has gradually moved westward since establishing its first flagship in Miami’s South Beach in 2009. It moved into Miami’s Bal Harbour Shops in 2013, then extended its reach to Houston in January of this year.

To differentiate the 4,000-square-foot space at South Coast Plaza, “I wanted a link to California,” said Laure Heriard Dubreuil, the peripatetic founder and chief executive officer of The Webster, minutes before taking off in a plane headed to New York from Los Angeles on Monday afternoon.

One sure way to forge that bond to the Golden State was to secure exclusive collaborations. Rebecca de Ravenel formed a new shape for her drop earrings especially for Heriard Dubreuil, who described them as “like little dancers in flamingo pink.” Nektar de Stagni crafted shark teeth and pink pearls into a necklace, bracelet and earrings to show “a good connection between the ocean and Miami and California,” she said.

Elisabeth Weinstock designed a peace-themed travel bag, and Ahlem colored the lenses of sunglasses in Champagne pink. Re/Done not only cropped white jeans with a frayed hem but also named the new style after The Webster’s founder. “I think it’s the perfect thing for Orange County,” Heriard Dubreuil said, adding that each piece bears a story behind it. “I’m buying everything I love.”

These exclusive collaborations complement pieces from a medley of emerging and proven labels — including Acne, Dior, Givenchy, Off-White, Raf Simons, Thom Browne and Olympia Le-Tan — which Heriard Dubreuil has selected.

The men’s and women’s clothing and accessories are surrounded by The Webster’s pink palette, which can also be found in the wool carpeting. The softness is offset by mint-green terrazzo marble floors and rich brown walls adorned with artwork by California natives Dennis Hopper and Aaron Young. Alex von Furstenberg’s console poured out of neon-orange Lucite contrasts the vintage furniture, including a one-of-a-kind table by Nada Debs. Heriard Dubreuil also discovered a fragrance to waft through what she hopes will be the retail nexus of Miami and SoCal: a jasmine scent from Los Angeles-based Eric Buterbaugh, which she’ll be carrying for the first time.

Another major difference between this location in Costa Mesa, Calif., and her other stores is the proximity to the burgeoning middle class in Asia that craves fashion and luxury. Having spent time in China early in her life and studied Mandarin for eight years, it’s an opportunity she welcomes. “It’s an opening to the Asian market,” she said. “It’s going to be new for us.”

Considering that her husband is a California native via Carmel on the central stretch of the state, Heriard Dubreuil is amenable to whiling away more days on the West Coast. The prospect of driving an hour north to paint Los Angeles in The Webster’s signature pink isn’t a foreign idea.