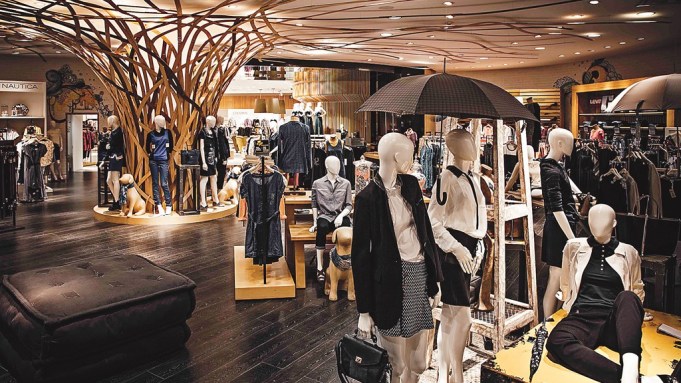 Women’s fashion and accessories sales at El Palacio de Hierro rose 20 percent last year — and while growth is expected to slow somewhat in 2013, the category remains key to the retailer’s future strategy.

‘“The Mexican customer is more classic and traditional,” said José Ramón Ferrer, director of women’s fashion. El Palacio caters to Mexico’s growing set of wealthy customers, including working women and housewives, as well as to women of more moderate means. It attracts mostly local consumers, rather than tourists, with the exception of its Cancún unit, which includes a mix of locals as well as foreign and Mexican tourists, said Ferrer.

Luxury accessories and jewelry are also instrumental to the retailer’s strategy.

Fabela explained that the Mexican woman used to have a lot of evenings out and would coordinate everything and buy fine jewelry, gold and semiprecious stones.

“Now we sell a lot of premium brands and fashion brands,” she said.

“Mexico is famous for silver, and Tiffany is our number one vendor. The blue box is hot, and they have good entry prices on silver. They are also strong in engagement rings. Cartier also does well and is very strong in rings,” added Fabela. She said the retailer has in-store jewelry shops with special seating areas to give a salon feeling. Other jewelry brands that perform well include Swarovski, Tous, Dodo, Michael Kors Jewelry and Pandora.

Like her American counterpart, the Mexican woman craves luxury handbags.

“Vuitton is always desired by every woman. We have a lot of aspirational clients. Bottega Veneta is growing a lot, also Gucci is one of the most popular brands,” said Fabela.

Sometimes the customer will seek logos, while other times they don’t want logos and just want the quality, she said. “They know the value of the brands.”

El Palacio is most similar to “Bloomingdale’s or Nordstrom” in the U.S., said Ferrer. He noted the contemporary business is becoming a more important segment of El Palacio’s apparel mix, with the expectation of attracting a younger consumer. Lines such as Marc by Marc Jacobs, Juicy Couture and True Religion are carried. Next fall, Palacio plans to add Alice + Olivia, Diane von Furstenberg, Theory, Joie, Equipment, Maje and Sandro to the mix, beginning with the Santa Fé/Mexico City store, he said. Eventually, the Polanco store will carry these contemporary brands. They also plan to add J. Brand, DL 1961 and Paige denim lines.

Another important category is the bridge area, where they carry Michael Michael Kors, Lauren by Ralph Lauren, DKNY and Tory Burch. “All these brands are very successful with us,” said Ferrer. They also will begin to carry Stefanel in the near future.

Among the Mexican and Spanish brands carried are Julio, Adolfo Domínguez, Purificación Garcia and Pineda Covalin.

For the most part, Ferrer pointed out that American brands in Mexico retail for practically the same as they do in the U.S. “The maximum difference is 5 to 10 percent,” he said. “Our customer travels a lot and has access to the Internet and e-commerce,” so it’s important that the lines are competitively priced.

“We’re trying to be in the same price range as the U.S.,” agreed Fabela about the luxury sector. She said sometimes the European handbags are more expensive, by between 10 and 15 percent.

To court the Mexican consumer, the retailer hosts special events such as ladies’ breakfasts and fashion shows at its stores. It sends out about 100,000 glossy style guides, called El Libro Amarillo, each season to its account base. The guides highlight the important trends of the season, as well as contain fashion news.

El Palacio also reaches out to its customers through TV advertising and billboards. Every November, the store hosts Noches Palacio, a celebrated commercial event with prizes awarded, depending on what people buy. Throughout the month, each store stays open late for one weekend, and they are decorated with specific themes — some of these themes have been Las Vegas, the U.K. and France. Twice a month, the store also sends to its cardholders La Gaceta, which is similar to a newspaper and has interviews and store promotions.

El Palacio de Hierro’s women’s offerings are divided among categories such as Gold Range, Contemporary and Designer. It is further divided by brands in corners. The store has a mix of concessions and wholesale models.

Buyers work with The Doneger Group, the New York-based fashion advisory firm, for fashion and trend information. “They help us with fashion trends and also the development of the American market,” said Ferrer, adding Doneger introduces Palacio buyers to new brands.

“El Palacio de Hierro has been a dominant retailer in the Mexican market providing designer and luxury brands to the affluent and aspiring fashion-conscious consumer,” said Tom Burns, senior vice president of The Doneger Group. “As global brands and retailers continue to descend on the Mexican market due to a growing economy and high consumer confidence, El Palacio has continued to differentiate itself by designing, developing and producing private brands across all categories and classifications enhancing its appeal to the younger and updated consumer.

“The executives, management and merchandising teams are very focussed on their customer, listening and interacting to make sure they continue to elevate their product assortments, brands and the shopping experience,” said Burns.

The store’s buying teams frequently travel abroad to purchase merchandise in the U.S. and Europe, although they seldom attend the runway shows in the fashion capitals.

These days, the fashion direction trends more toward dresses, said Ferrer. At the bridge level, Michael Michael Kors and Lauren by Ralph Lauren do very well in dresses. He said the store has two levels of dresses: at the higher end, there’s Badgley Mischka and Tadashi, and at the next plateau is Adrianna Papell, Lauren by Ralph Lauren, Calvin Klein and various Mexican brands.

“Dresses are doing really well from the middle to the high ranges,” said Ferrer.

Footwear brands such as Nine West and Steve Madden, as well as “affordable luxury” labels like Tory Burch, Coach and Michael Kors, are strong performers. In luxury, labels include Jimmy Choo, Sergio Rossi, Yves Saint Laurent, Burberry and Ferragamo. “We have been very successful with luxury accessories, and in shoes, we have developed the luxury business,” said Ferrer. “Our number-one brand for shoes is Tory Burch.”

With the expansion of El Palacio’s Mexico City flagship in Polanco, from about 270,000 square feet to 650,000 square feet, will come a greater opportunity for additional brands to be carried.

“The idea is to have the flagship of flagships,” Ferrer said. That store will carry such European ready-to-wear lines as Dolce & Gabbana and Yves Saint Laurent, he added. Other lines that are carried in that department include Dior, Gucci, Prada, Louis Vuitton, Lanvin, Brunello Cuccinelli, Roberto Cavalli and Hervé Léger.

As it is for most retailers, Ferrer said the fourth quarter is the most significant as far as volume goes.

“The November-through-January period is the most important sales period for us,” said Ferrer. It includes Noches Palacio, Christmas and the sales in January.

The retailer isn’t as aggressive as its American counterparts when it comes to sales. They mark down merchandise in January and July, when they have two sales periods.

“We hold it at full price until the end of the season,” he said.

Ferrer characterized the Mexican economy as “OK.” With the change of the season, “we’re going to improve,” he said.

Ferrer noted that El Palacio’s apparel, accessories and footwear business — which accounts for 18 percent of the store’s total sales — increased 20 percent from 2011 to 2012, and would be up 5 to 6 percent this year. These figures exclude luxury accessories and jewelry.

DKNY has been selling El Palacio de Hierro for the past 10 years.

“Our business is growing as they expand and roll out new doors like Interlomas, and enter new regional markets such as Veracruz and Querétaro, slated to open next year,” said a DKNY spokeswoman. She said the retailer has DKNY rtw exclusively in Mexico and there are 11 in-store shops in key locations in Mexico City, as well as Puebla, Guadalajara and Monterrey. The brand also sells DKNY Active, accessories and shoes on a nonexclusive basis. El Palacio also carries DKNY watches, intimate apparel and fragrances.

“We’ve had a very successful relationship the past 16 years,” said Andrea Artigas, managing director for Mexico for Tiffany. Tiffany was one of the first luxury retailers to open a store within El Palacio de Hierro, where Tiffany operates the business, and today the brand is in eight Palacio stores.

She confirmed Tiffany does a large engagement business, from the engagement ring to the bridal table to the wedding. “Palacio has been evolving the last few years to what the luxury customer wants, to improve the experience, atmosphere and environment,” she added.

Tiffany has two stand-alone stores in Mexico and eight within El Palacio de Hierro stores. She said there will always be the customer who likes the stand-alone store and wants to park in front on the street. “Then you have customers who want to multitask and shop within Palacio,” she said.

Tiffany’s main competition is Tiffany in the U.S. The prices are pretty similar, except for the fact that Mexico has a higher tax rate — 16 percent — than New York, where it’s 8.4 percent, or California, where it’s 7.5 percent.

“The amazing thing about Palacio is we have a wide variety of customers,” she said. “It’s an open space in a department store. It’s impossible to classify the customer. Palacio is very democratic, and that’s what has been amazing for the relationship. They position the brand at all levels. There are teenagers who buy the little heart for $300, and there are women who want a yellow diamond. Everyone feels comfortable inside Palacio.”