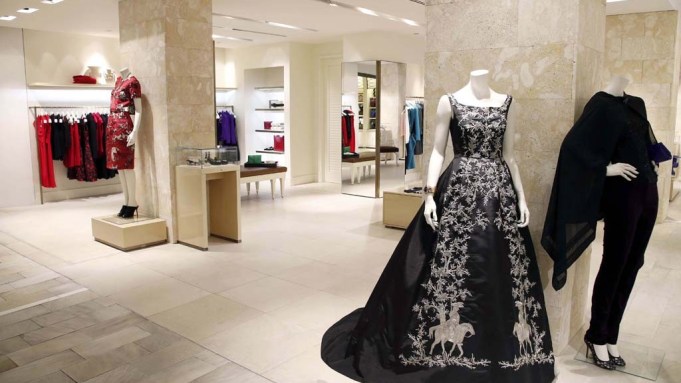 NEW YORK — The “world of Oscar de la Renta” is located at 772 Madison Avenue, the designer’s flagship. Now a version of the breadth of offerings can be found in a new leased department at Bloomingdale’s 59th Street flagship.

The concession represents a growth vehicle for de la Renta and signifies milestones for both the designer and retailer.

The 1,000-square-foot space, which bowed Friday, is de la Renta’s first leased department in the U.S. and marks the first time in more than 20 years that the designer’s ready-to-wear is available at Bloomingdale’s.

“When I first came to New York, Bloomingdale’s was the place to be,’ said de la Renta. “It has always been more than a store. It’s truly a destination and a trademark of what this city is all about. I am really happy to be back at Bloomingdale’s in such a meaningful way. The shop is in many ways a celebration of the expanding world of our brand.”

The designer is expected to make an impromptu visit to his leased department some time on Monday.

Leased shops, a retail buzzword, allow brands to manage merchandising, visuals, staffing and operations with guaranteed space in the department or specialty store for up to five years before renewal is required. Brands pay rent and stores can also get a percentage of the revenues, anywhere from 5 to 20 percent. The leasing model is popular in Europe, the Far East and other parts of the world. Selfridges, Harvey Nichols and Harrods in London and Galeries Lafayette in Beijing have a large number of concessions, while at El Palacio de Hierro in Mexico, 95 percent of the luxury vendors operate leased departments within stores.

Louis Vuitton popularized concessions in the U.S., where luxury brands such as Christian Dior, Fendi, Burberry, Gucci, Prada and Miu Miu have been pushing for more leased departments in upscale department stores.

“Our intention is that the leased department business will become an important part of our business model,” said Alexander Bolen, chief executive officer of Oscar de la Renta. “As we think of the future business, we’d like to learn to do leased departments the right way. We’re thinking of this as a very important adjunct to our Madison Avenue store. In inventory matters, we’ll be very nimble.”

He characterized the concession as “fundamentally a wholesale arrangement. We may contribute to that. The risk of the buy, the delivery and the sell-through is all ours. The upside is the margin associated with retail over wholesale,” he said. “It’s our store within the context of being the world of Oscar de la Renta.”

The Bloomingdale’s concession qualifies as a “world of” distribution point because it showcases multiple categories such as rtw, shoes, handbags, jewelry and home. The various products are woven together in displays where shoes, handbags and jewelry are grouped on shelves, a white flower necklace is used to accessorize a resort blouse and home items such as a champagne bucket ($350) are used as an accent and a tray holds accessories. A black silk satin mule is $775; a Mulberry snakeskin roll clutch, $1,190; a Kelly chine tartan silk taffeta dress, $2,490, and a black silk faille gown with gold bullion and bead toile embroidery, $13,990.

“We can’t do that with a shop-in-shop,” Bolen said, explaining that the merchandise would be chosen by the department store’s “ready-to-wear buyer [only], not a shoe buyer or a jewelry buyer. We’re presenting a broad assortment. In Europe, it’s a more common arrangement, and we want to figure out how to do it.”

Special orders will be part of the business. Clients will even be able to purchase bridal gowns from look books on iPads that staffers will carry; an eager mother-of-the-bride was shopping for a dress during the department’s opening hours on Friday.

Bolen said the company is speaking with other American retailers, but declined to name them. “We’re having some discussions. There’s no exclusivity period [at Bloomingdale’s]. This is our store within Bloomingdale’s. We’re a rent-paying tenant.”

Oscar de la Renta is talking to Harrods about opening a leased department there. “We haven’t been able to reach a financial agreement yet,” Bolen said, “but we’re still talking. It’s something I want to do.”

“We’ve had Oscar de la Renta in the store for about four minutes,” Frank Doroff, vice chairman and general merchandise manager of rtw and bloomingdales.com, said just after the designer area was unveiled. “We’ve wanted him for as long as I’ve been here, which is 22 years. We’re ecstatic to have him here.”

“For the U.S., we’re doing business in a unique way,” Bolen said. “We’ve been growing our partnership with Bloomingdale’s with fragrance and home products. We opened apparel as a wholesale account at Bloomingdale’s in Chestnut Hill, outside Boston.”

The leased department gelled after Bloomingdale’s approached de la Renta about getting rtw distribution for 59th Street. “We have a great relationship with Bergdorf Goodman and a fantastic relationship with Saks Fifth Avenue,” Bolen said. “When considering distribution, we always ask ourselves, ‘Is there a customer we are not currently serving?’ The answer was, ‘Yes.’ There’s an affluent international tourist at Bloomingdale’s that we don’t serve. We went to address the proposal and lo and behold, we were able to work something out.”

Besides controlling inventory, leased departments allow vendors to hire their own staff, which is seen as a big plus. “You can control the environment in terms of people and customer service matters,” Bolen said.

Anna Lee Bassani-Mena, de la Renta’s manager at Bloomingdale’s, was previously a manager at Saks Fifth Avenue and trained for several weeks at the de la Renta Madison Avenue flagship. The department has four full-time staffers including the manager.