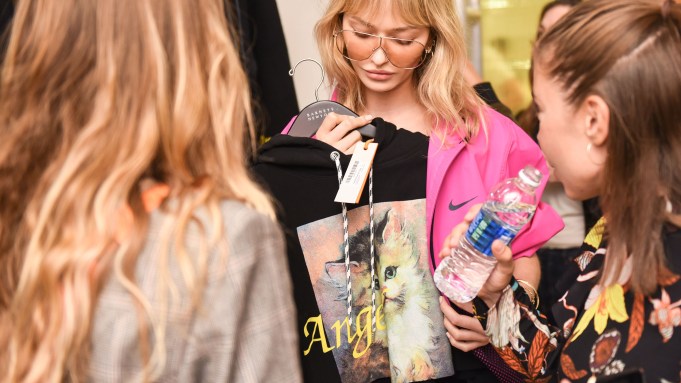 NEW YORK — It won’t be too long before Barneys New York replays “thedrop@barneys.”

That was one intense, unusual weekend of designer appearances, exclusives, panel discussions and partying at the Madison Avenue flagship here, requiring months of planning and no small expenditure to put together. And it was worth it, according to Daniella Vitale, president and chief executive officer of Barneys.

“It sounds very biased, but it was really quite magical. Almost 10,000 people were in the store — double what we normally get on a Saturday,”  Vitale told WWD.

Streetwear was a major component, particularly in men’s, though women’s, which has been slower to catch onto the category, had a spike, Vitale said. “We sold a lot of non-street apparel as well,” Vitale added. “Every single category had a strong day. Maybe fur accessories was the only one that didn’t. It’s still early in the season.”

With the streetwear emphasis, “we want that youthful culture in 10 years to be our best customers,” Vitale said, while assuring that the retailer is not abandoning established, high-end designers that tend to draw veteran Barneys shoppers. “We want to attract a broader audience.”

On Sunday with the storm, Barneys “was a little quieter” compared to Saturday, though people showed up for the panels, and business was still good, Vitale said. Business, she observed, was up 25 percent on Saturday and 9 percent Sunday. The thedrop@barneys was held online, too, where sales rose 30 percent, Vitale said.

“For sure, this is something we can keep going with. I really think we will do it again, maybe on the West Coast in the spring,” Vitale said. It could also possibly be staged two times annually, she added. “But let’s give everyone some time to recover.”

Thedrop@barneys was a two-day tactic to temporarily showcase exclusives and transcend traditional retail with a host of activities and “activations” like customizing fashion with artwork, DJs and free refreshments, so Barneys elevated a sense of being experiential and entertaining.

In some ways, thedrop@barneys recalled Fashion’s Night Out, a fall event launched in 2009 to put consumers back in the shopping mood in the height of the Great Recession, and support charities. Initially, more than 700 stores across the five New York City boroughs participated with everything from designer and celebrity appearances to a cabaret shtick, a designer cook-off or a neighborhood block party. It spread to 12 countries doing their versions of the initiative.

Fashion’s Night Out drew big crowds, though most people came to meet designers, grab a drink and socialize. Few actually shopped. After a few years, Fashion’s Night Out in the U.S. was scrapped, with retailers complaining the costs outweighed the benefits.

There were similar concerns going into thedrop@barneys. “I had goose bumps. I really did,” Vitale said. “It was that kind of feeling.…Someone did say this reminds of the first Fashion’s Night Out. Thedrop@barneys very much had that kind of energy. The only difference was people were buying. To be completely honest, I was surprised at the amount.”

A preliminary review of the purchasing data showed that about 20 percent of the Barneys shoppers were new to the store, Vitale said, suggesting mission accomplished. Barneys was out to attract new and younger customers.

Vitale did acknowledge that many people came just to party or for that free cup of coffee. “That’s completely fine,” she said. At least they came to the store and maybe they will return one day.

She said every area of the company got involved in the planning, and more than 100 employees from Barneys corporate offices volunteered to help over the weekend. The extra help and the associates wore specially-made black and yellow T-shirts with thedrop&barneys logo, so they could be easily spotted. “We should have sold them or given them away,” Vitale said. “Everyone was stopping our sales associates” inquiring about the shirts.

Vitale cited some lessons learned. “We probably started a little bit too early and probably next time we will do it for one day and stay open a little later,” past 9 p.m. “I was very surprised how many people were staying late. We really had to get people to move out.”

A next step would be to incorporate thedrop@barneys into the Barneys branding experience, and not be something that has to happen only once or twice or year, Vitale said.

Asked about the costs of staging the event, Vitale replied, “It is expensive. It’s certainly not gratuitous, though this is not the year I would ever spend tons of money on anything,” referring to the tough business climate. “Certainly, the return on investment was very good — very, very good. We think (thedrop@barneys) has legs.”

Barneys started planning the event in March, well in advance due to the challenges of getting designer  product commitments and negotiate appearances. “We could have used a couple more months,” Vitale said.

For the event, 30 brands provided either capsule collections or single products. On Saturday, Barneys released nine “major drops” coordinated with appearances by designers Virgil Abloh of Off-White, Mike Amiri of Amiri, Heron Preston, Faith Connexion, Marcelo Burlon, Greg Lauren, Francesco Ragazzi of Palm Angels, Ben Taverniti of Unravel Project and Jerry Lorenzo of Fear of God. For the most part, Barneys launched these labels, some as recently as this fall, either exclusively or in tandem with a few other retailers around the world.

On Sunday, panel discussions with designers, influencers and fashion industry insiders were held.

Among the activities, Preston on Saturday DJ-ed; custom hat orders were taken by Nick Fouquet; celebrity tattoo artist Jonboy did his thing; lemonade and apple cider was served by the New Balance limited-edition sneakers, and Devialet opened an installation and contributed sound for the penthouse space which was used as a green room for designers and VIPs. All told, there were more than 40 activations across men’s, women’s, kids, home, beauty and jewelry areas, and there was an old-style Italian New York pastry cafe by Fila. “It’s been a pretty busy day,” said a worker at the cafe at around 6:30 Saturday, serving up a latte. “It seemed to come in waves.”

Daniella Vitale on Barneys: Evolving in a Complicated Climate

Richard Baker Puts Real Estate Back in the Retail Spotlight