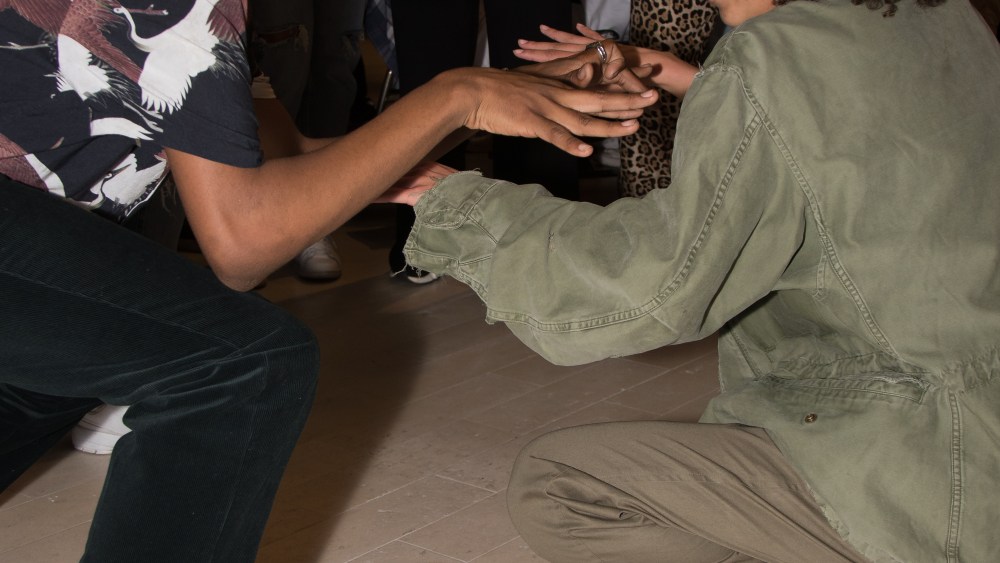 LOS ANGELES — The Wu-Tang Clan on Wilshire Boulevard? Who would have thought — but Barneys New York made it happen smack in the center of Beverly Hills when the retailer debuted its The Drop L.A. @Barneys event over the weekend.

“Are we really in Beverly Hills? Are we really at Barneys?” Robert Fitzgerald Diggs, better known as RZA, pondered as he climbed the stage, saying aloud what some were likely thinking amid the store’s winding marble staircase, high-end designer labels and terrazzo flooring.

It was there in that six-floor building that Barneys brought its Drop concept, which debuted at its Madison Avenue flagship last fall, to the West Coast. The retailer, which enlisted the help of Highsnobiety, staged a two-day spectacle that included installations from Fear of God and Heron Preston; DJ sets from Siobhan Bell and Simi Haze; live tattooing from Fun City; piercings from J. Colby Smith; panel discussions; a dip-dye customization station for sneakers; roller skating rink; Fila-branded pizza station, and more than 20 exclusive capsules. Pumping up the frenzy were appearances from designers and celebrities, including Jordyn Woods, Justine Skye, Jeremy Scott, Jerry Lorenzo, Heron Preston, Jon Buscemi, Chris Gibbs, John Elliott and Ali Fatourechi.

It seemed to work, with initial results from Saturday showing 8,000 people filtering through the store that day, four times more than traffic a year ago. Sales on Saturday were up 50 percent from the same day last year.

Woods, friend of Kylie Jenner and now an influencer in her own right, posed with young fans clamoring to get a selfie next to the pointy-toe stiletto boot she designed in collaboration with Barneys for The Drop L.A. event.

Woods was sitting in the makeup room of the store’s basement floor late Saturday afternoon, surrounded by her mother, brothers and sister just ahead of her personal appearance. She hadn’t yet had a chance to walk the store’s floors, but said the concept is in line with where the consumer is going today.

“Everything is about the consumer nowadays and people want to connect with the consumer,” Woods said. “As with social media, there are so many things that people follow and look to so there’s just naturally this blend within the industry between music and fashion and designers. With us all working together, it’s cool to see what can come about and all the creativity flowing. And, honestly, if you would have told me this would happen last year, I would have not even imagined it.”

Compartmentalizing buckets of culture that were traditionally kept separate no longer makes sense, pointed out Jeremy Scott, who was also on-site Saturday with the debut of his “Couture Wars” collection of sweatshirts, T-shirts and bags for Barneys.

“Everything is merged,” the designer said. “That is, people want the shirt they saw on the performer they like in the music video playing the song on the radio that they’re listening to when they’re driving to go to the place that they’re eating that has the art exhibition in the back. It’s all conversion. It’s all pop culture in the end and that’s what is the driving force for me about fashion, obviously. That’s the link between art, music, pop culture and fashion.”

Scott now turns his attention over the next few days to his upcoming fashion show set for Friday in Burbank, of which he allowed in response to what he could say about what’s to be expected: “It’s going to be rootin’ tootin’ fun.”

Later, upstairs on Barneys’ third floor, he posed for pictures and chatted with fans. Just a few steps away, Barneys creative director Matthew Mazzucca sat in the space dubbed Birkenstock Park to talk about The Drop’s West Coast debut, which iterated in a big way on the concept’s New York launch with greater involvement from the brands and a heavier focus on women’s. It’s part of an ongoing conversation Barneys is having with its Los Angeles customer base, which began last year when the retailer rang in its window display with the Haas Brothers.

“Haas [for the Holidays event in Beverly Hills] was a good lever to pull, but L.A. needs more stuff like this,” Mazzucca said, surveying the floor. “More retail’s coming here but we need to stake our claim in luxury.”

With a packed house over the weekend, Barneys certainly asserted itself, with the proof of that the steady traffic into the store despite the reality that most of Los Angeles lacks foot traffic on the streets, Mazzucca pointed out.

“It’s cool to see a 60-year-old woman shopping The Row next to a kid and doing that with a smile on her face. It’s really great to see young kids come out, especially with this culture that’s not a pedestrian culture. People have an intention to be here.”

As Barneys seeks to be on point with where consumers are going, the major push out West and the event in and of itself are viewed as a valuable asset in keeping its retail offering relevant. Mazzucca confirmed the company is already eyeing new iterations of The Drop event with another one likely set for Madison Avenue before a push internationally.