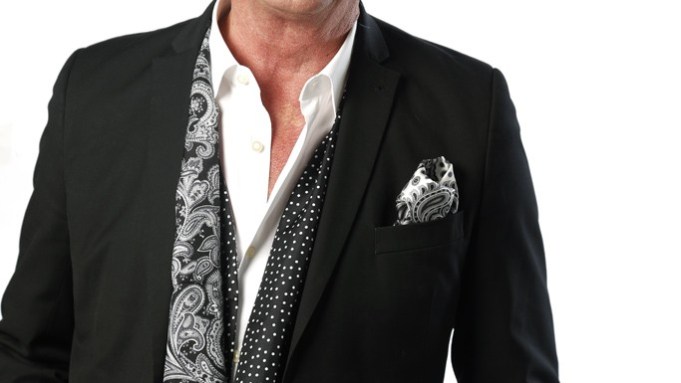 Editor’s Note: Think Tank is a periodic column written by industry leaders and other critical thinkers. Today’s column is written by Nick Graham, chief executive of NGO Inc. and founder of Joe Boxer.

In an elevator in the Portland Hilton last month, a very normal-looking guy asked me where I bought my polka dot silk scarf. He looked like he might have been in town for a medical device convention or, being Portland, the National Chainsaw Forum. He went on to say that he’d been thinking about getting a scarf like the one I was wearing, and wanted to know where he could buy one. I said that I had bought it in New York, so I gave him my e-mail and told him I would find him one and send it. Within three minutes I received his e-mail and it read, “Met you at the Hilton. Help me dress better.”

It’s just one in a series of encounters that have happened to me over the last several months. All over the country I somehow find myself engaged in conversations with men who would never normally discuss things like patterns, color or cut, but it’s happening everywhere I go. These guys are both straight and gay, and sometimes “stray,” which is what I call someone who’s a bit of both.

Twenty-five years ago, 80 percent of men’s underwear was bought by women. That number today is probably down to 20 percent. Men are becoming more independent in their thinking and more adventurous in their self-expression of who they are defined by what they wear. The uniform that we have trained men to wear is ready for a big shift. We’re about to go from Prep, to what I call Post-Prep.

If Prep is e-mailing, Post-Prep is Tumbling. Prep is Prius, Post-Prep is Tesla. It’s the Darwinian evolution that we, as men, are going through — crawling out of the primordial mud of tradition, moving toward an oxygenated world of choices about how we want to represent ourselves as our personal brand. It’s time we gave our webbed toes a pedicure.

Why should pattern and color be just the domain of women? Why should we continue to choose which neutrals to wear? As Winston Churchill wrote, “I cannot pretend to feel impartial about colours. I rejoice with the brilliant ones and am genuinely sorry for the poor browns.” Don’t get me wrong, I like brown; it looks great on camels and trees, but I think Churchill reflects my feeling about men’s wear.

Men’s wear as a palette for great design can and should be as exciting as women’s wear. The expression of design in women’s wear is masterful and historical, adventurous and delicious, superb and sensual; so far ahead in its exploration of fabrics, cut and emotional texture. But men’s wear is still so unexplored. So how far can we push ourselves? I don’t mean that men should start dressing like Lady Bunny, but we can go much further than we do.

With only a very few exceptions, there hasn’t been a significant launch of a signature American men’s wear brand since Tommy Hilfiger in 1985. This statement will undoubtedly be debated by many. The iconic campaign that advertising visionary George Lois created for Tommy at the time was brilliant, and instantly planted Tommy’s flag on top of the world.

But as the comedian Eddie Izzard says, “No flag, no country.” We need more men’s wear designers to plant their flag in the ground.

When I say that there hasn’t been a significant launch since 1985, I don’t mean launch in terms of scale, but in market influence. I think John Varvatos is brilliant, amazingly talented and a true artist. I think Thom Browne is a genius, and whatever they put in the water in Pennsylvania where he grew up should be bottled. There are others, of course, but clearly not enough. If you think about it, New York is the only fashion capital in the world that doesn’t have an organized men’s fashion week, even though the United States is one of the largest men’s wear markets. Isn’t that telling us something?

Men’s wear sales at some of the contemporary Web sites that carry both men’s and women’s are 50 percent higher in comparison to the off-line sales of women’s apparel. If total women’s clothing sales in the U.S. are about $120 billion, and men’s are about $60 billion, does that mean that men’s has a $30 billion upside if there were more fashion for them to buy?

If men were buying with more frequency (more like women in their need to keep up with style), the opportunity could be significant. An increase of 10 percent or 20 percent would be remarkable, and in some ways it’s already happening. As noted in the New York Times last December: “Men’s suit sales will be up 10 percent this year, and sports jacket sales will be up 11 percent, while women’s ready-to-wear sales remain flat.”

It’s not that men are necessarily more comfortable shopping online; maybe they are finding more fashion there. It’s pretty hard for most men to find contemporary apparel in the brick-and-mortar space, unless they live in large urban areas. When I walk the men’s floors of some stores, I feel like I am in a time-warped Valium-induced haze; style that is hermetically sealed in a world of golden Labradors and perfectly manicured mansions that haven’t yet had the chance to (and may not) be passed down to the Post-Prep generation.

This is what our friend in Portland faces everyday.

Look at the modern world we live in; how we are going to dress in it? The technology shaping social systems; electric cars that can drive across the country; the stunning world that is being mapped and photographed on every street — and now in the ocean; crowd funding of new ideas that would never before have seen the light of day; space tourism coming online in 2014. Are we still going to drape cable knit sweaters gently around our shoulders while the world goes through one of the most disruptive periods of its existence?

This conversation is not about a new trend, but the launch of a new style. Style is like knowing someone all your life; a trend is having dinner with someone and never seeing them again.

It’s been a while since I’ve worked on Seventh Avenue. Not much has changed. There are the same retailer/vendor conflicts, the late deliveries, the supply chain issues, the markdowns; the everyday drama that goes along with the apparel business. But what has changed is the transparency of the designer/consumer relationship.

Retailers are not the guardians of fashion anymore, just like record companies are not the arbiters of what people listen to. We can no longer hide behind a store door that opens at 9:30 a.m. to let people buy what we tell them to. Creativity and commerce are now open 24 hours a day and nothing will again hold them back. The true narrative of a brand can now be distributed unfiltered and fresh, and not be stifled by the economics of a third party.

Perhaps it is in this environment that men’s wear designers and retailers can finally flourish. So get ready to take down the posters of the golden Labs. I’m just as sentimental as anyone, but it’s time to let the dogs out, so to speak.

Which is why I’m going back into the men’s business. When asked by people, “Why on earth would you go back in the industry?” Well let me put it this way. First, I love it, even with all its insular idiosyncrasies. Second, I need new clothes. Third, there is a huge opportunity I just can’t ignore. And finally, to quote my new company motto, and which I also use as the rallying call for men’s wear in general: “Because he can.”

*The term “Men are the New Women” came from an article I read last fall. It is credited to Bret Pittman, director of J. Crew’s Ludlow Shop. Mickey, I know that you’re probably going to read this and if I didn’t mention it I’d never hear the end of it.

Nick Graham is the CEO of NGO Inc, a company that will produce, license and distribute men’s apparel and accessories under the Nick Graham brand starting in 2014. He is also the Founder and former Chief Underpants Officer of Joe Boxer. nick@nickgraham.com.