This Fashion-Forward Shield May Land on Faces Soon

For product designer, entrepreneur and venture capitalist Joe Doucet, fashion has a crucial role in the coronavirus crisis. It all comes down to one critical question: Is it possible to make face-worn safety gear that people actually want to wear?

Doucet dedicated some of his shelter-at-home time to focus on the question. So, at his home in upstate New York, the design pro taught himself 3-D modeling and rendering programs and used his considerable design talents to create his vision of a fashionable Face Shield featuring built-in sunglasses.

Now he wants to produce the item, which would turn this unique concept into a real product available to the public. 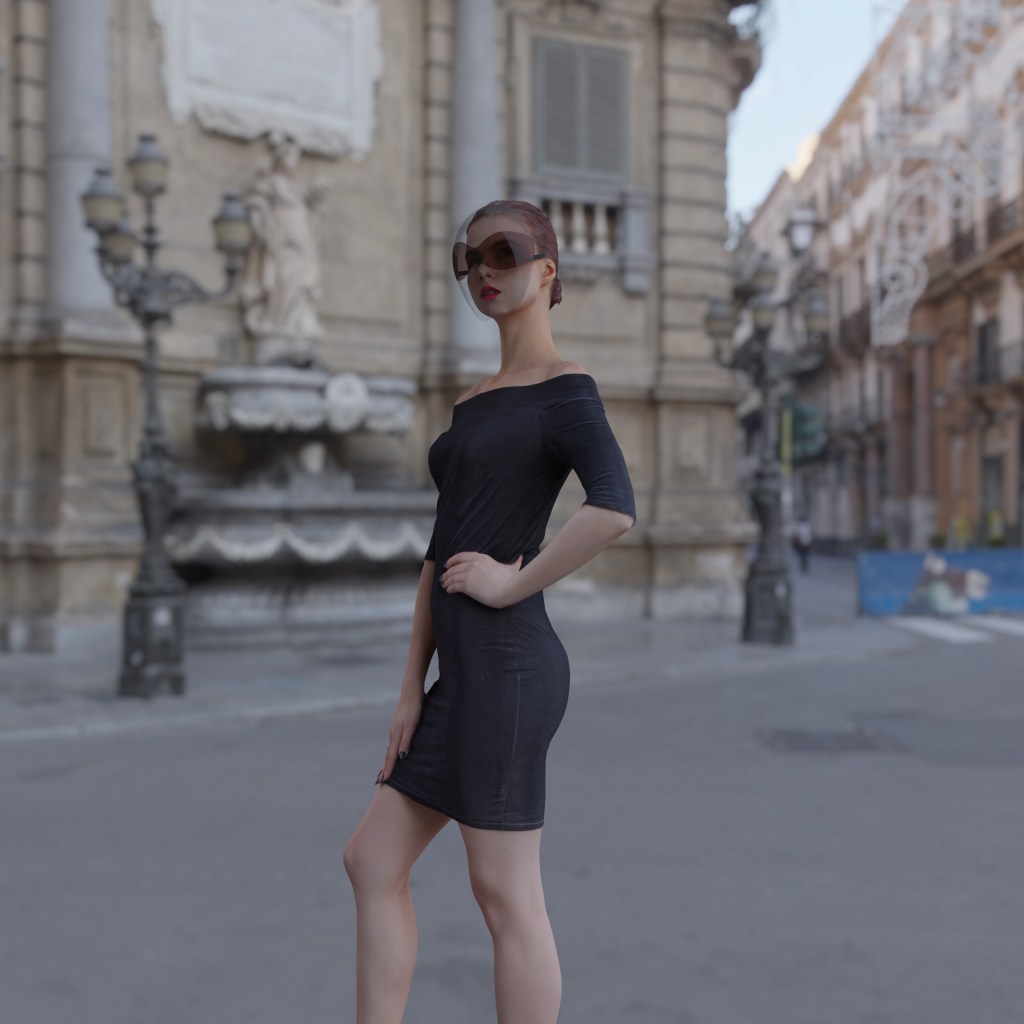 To encourage people to wear the shield, the design conjures a sunglasses aesthetic.  Courtesy image

Although there are plenty of fashion players focused on cloth face masks, Doucet decided to focus on shields instead, as health-care experts suggest the former provides greater protective powers.

“Face shields come in various forms, but all provide a clear plastic barrier that covers the face,” Doctors Eli Perencevich, Daniel Diekema, and Michael Edmond wrote in an April opinion piece for The Journal of the American Medical Association.

“[They] require no special materials for fabrication and production lines can be repurposed fairly rapidly,” the authors added. “Numerous companies, including Apple, Nike, GM and John Deere, have all started producing face shields.”

Unlike those versions, Doucet wanted to bring a uniquely fashion-focused version that solves some of the standard shield’s usability challenges.

Granted, he’s no medical professional. But when it comes to design, Doucet is well-seasoned. His firm, Joe Doucet x Partners, has worked with Nike, Reebok, LVMH, YSL, Gucci and many others on everything from smart clothes to packaging.

Through that lens, he could see the fundamental design issue at hand. “The problem is that face shields are ungainly, bulky — it’s just not something that people would choose to wear,” he told WWD. “So I began to think about the behaviors that we have that are somewhat similar, that are commonplace. And what most of us do when we go outside is put on sunglasses or glasses.

“If I could adopt that common behavior and create a face shield that would be very desirable to wear, something that has a factor about it that you want to put on, perhaps we can achieve more mass adoption of this necessity,” he explained.

And so he leaned into the sunglasses aesthetic, putting a tinted section over the eyes set within the larger transparent sheet protecting the whole face.

To bring the concept forth, Doucet had to learn how to use 3-D design tools. Autodesk’s Fusion 360 modeling software, which is free to hobbyists, and the open-source rendering program Blender allows anyone to manifest their ideas. What no one else has, though, are Doucet’s eye and expertise.

He combined his eye-catching model with some existing photographic assets to make them look realistic.

“I took components from different things and pulled them together, in order to create these realistic settings and scenarios,” said Doucet. “I tried to create the lighting exactly, to mimic where the sun was and the shadows. I bought 3-D models of the women — I can’t character model… And then I put everything together and modified it in the way that we know represented choices.” 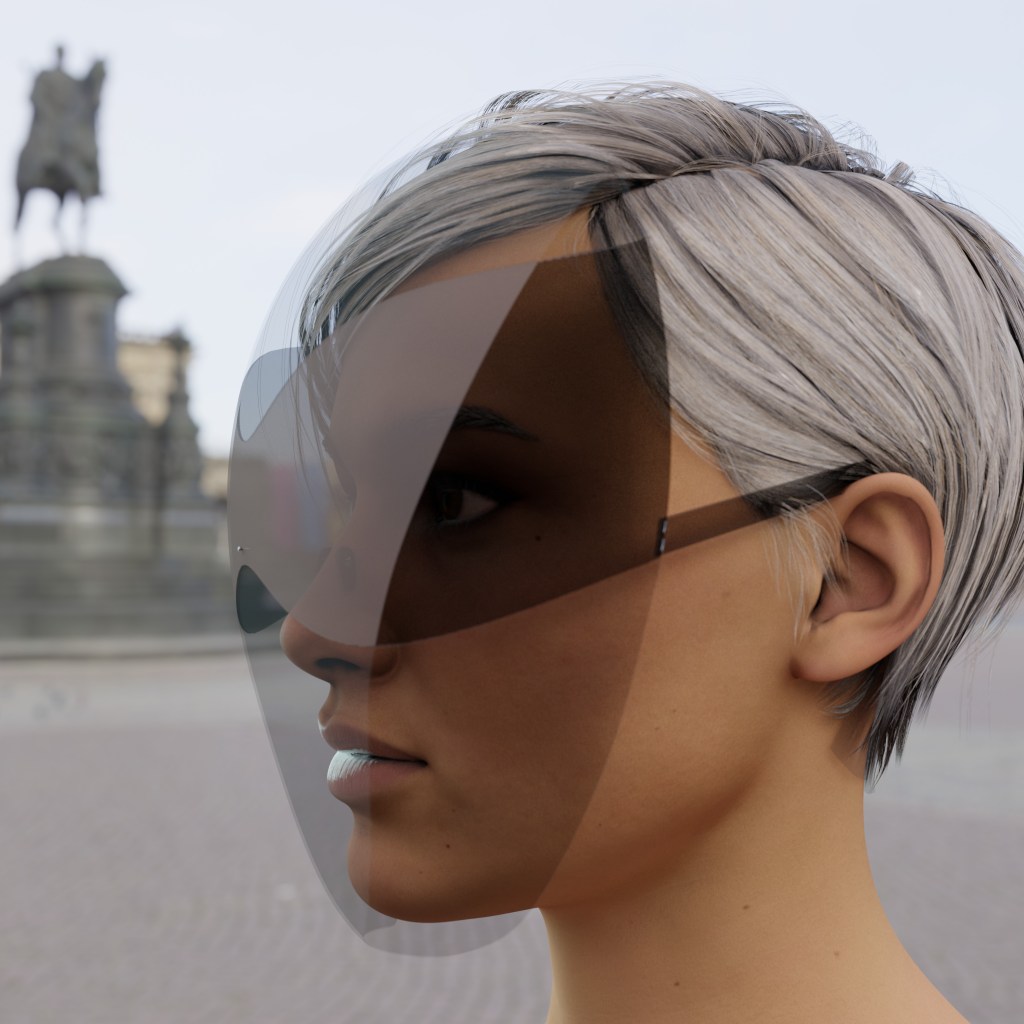 Doucet’s concepts essentially function as virtual prototypes, now that he’s in talks with manufacturers to produce the shields.  Courtesy image

If he were to envision a live photoshoot for a physical prototype, he added, which is typically what his firm does, it would pretty much match this virtual representation.

That turns out to be key, as so many photo shoots are frozen due to the pandemic.

Almost immediately after releasing the concept art to the public, Doucet was besieged by responses and inquiries. By his count, his design has been shared 20 million times, and thousands of e-mails have been pouring in from people. “It’s been pretty phenomenal,” he said.

Now the designer’s in talks with half a dozen potential manufacturing partners. He hopes to strike a deal within days and start distribution within a month.

“It’s rare that you get the opportunity to do a project that has the potential of saving lives,” he said. “And so we have to do what needs to be done. We’re moving a lot faster than we normally would.” He sees it as a literal life-or-death matter.

The stakes may be going up in more ways than one, as face coverings become a graver sticking point in the U.S.

Despite mandatory policies in various states, some folks still adamantly refuse to wear face coverings — whether as resistance to perceived government overreach or due to simply finding masks awkward, uncomfortable and difficult to breathe through.

No matter the rationale, the consequences are escalating. In Michigan, a Family Dollar security guard was shot and killed for trying to enforce a face mask policy. Other incidences of abuse hurled at store employees or restaurant workers has some officials rethinking the rules, driving some of the patchwork approaches across the country.

Turning safety gear into compelling fashion accessories may not solve the problem. But if it helps move the needle on at least some of the public’s opposition, that looks like be a bet worth taking.

Toward that end, Doucet eschews the notion of a premium offering or some sort of COVID-19 couture.

Eventually, he figures a range of face coverings will emerge to suit different tastes, he added. That is, after all, the ebb and flow of fashion. And that hasn’t changed, even in the time of the coronavirus.