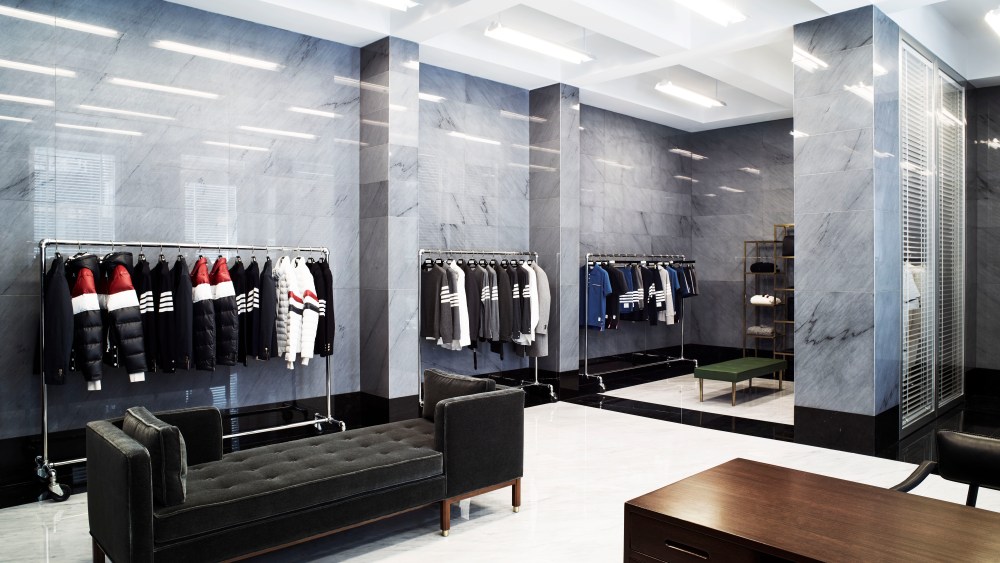 LONDON — Thom Browne continues to expand his retail footprint with the opening of his first store in London, located on Mayfair’s Albemarle Street.

The store, housed in a former art gallery, is the brand’s second European location, following a recent opening in Milan.

“The opportunities for the London and Milan locations came at the same time, but London required a longer design process,” said Rodrigo Bazan, the label’s chief executive officer, who joined last year from Alexander Wang, where he was president.

Bazan pointed to the store’s intimate feel, which is reflective of the brand’s overall retail strategy. “It’s a compact size and that will be the size of all our future stores. We want to create something private and intimate,” he said of the store, which spans 1,500 square feet.

Browne worked on the design of the store with the architect Flavio Albanese to translate his “austere American sensibility” in the new space. The two creatives worked with a monochromatic palette of gray, black and white, using signature materials and experimenting with new ones. The ground floor, which stocks the men’s and women’s ready-to-wear and accessories collections features walls covered with bardiglio gray marble, used in many of Browne’s stores, while the floors and the basement area are covered in a cloudy white carrara marble.

The store also features all vintage furniture, by American and French designers such as Dunbar by Edward Wormley, Paul McCobb, Jacques Adnet and Maison Jansen.

One of the standout features of the space is a curved white staircase with black marquina marble steps that leads to the basement changing rooms and private shopping area.

Bazan said the London opening aims to serve both local clients as well as tourists, that’s why a central Mayfair location was the brand’s primary choice. “London is a key tourist destination so we absolutely want to cater to tourists who are connoisseurs of the brand and to the local clientele. We chose Albemarle Street because of its adjacency to Bond Street and also all the history it has, it’s one of the oldest streets in the area and London’s first ever one-way street.”

To mark the store opening, Browne has created a tennis-inspired capsule range, which is launching today and will be exclusive to the London boutique for the next week.

The range features pleated skirts and preppy white blazers or knitted cardigans with navy and red striped panels. Accessories, such as a striped backpack and pair of sneakers are also included in the range.

“This is the first time a store opens with the launch of an exclusive collection. We also shot the collection on athletes as part of a tennis match in London. Thom loves tailoring and sport, so we really want to promote that,” Bazan said.

The collection will then go on to be sold at Thom Browne boutiques worldwide and on Farfetch.com.

Later in the year, the company will be extending its partnership with Farfetch, with the launch of a technology it has been developing with the retail platform, that will connect its brick-and-mortar locations with its online stock.

“The technology we built with Farfetch will connect customers with the global merchandising we have. In-store customer will be able to see a very small, focused selection but through smartphones they’ll also be able to view more than 1,000 units of our full collection, which is very wide. This can be anything from a one-off runway piece to something that’s made-to-order. It’s about offering a very unique, tailored experience to the customer.”

The label, which took investment from Sandbridge Capital last May, will continue its retail rollout with four locations in China being planned for later this year, as well as a store in Busan, South Korea. A takeover of Colette is also planned for next October and will launch alongside a series of exclusive products.