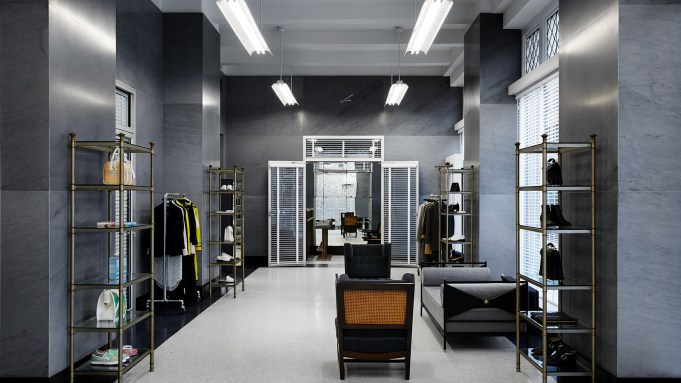 For 10 years, Thom Browne approached the real estate company located next door to his men’s store at 100 Hudson Street about taking over the space for a women’s store. “Real estate was doing really well,” said Browne, who doesn’t know why the business finally gave up the space recently. But he’s glad they did.

On June 6, Browne opened his first women’s flagship in the U.S., a roughly 2,000-square-foot unit that’s connected to the original men’s store, which opened in 2006, through a passageway. “It was always supposed to mirror what the men’s store has been,” said Browne of the women’s shop, which was built out with buff-colored, custom-poured terrazzo floors and gray Bardiglio marble walls. “I always refer to it as a midcentury American bank or office building.”

The men’s store was also redone and expanded with a salon for made-to-measure tailoring for the occasion, and both spaces are set with furniture by Jacques Adnet, Paul McCobb and Edward Wormley. In the back of the women’s store there’s a private bar area for customers, featuring a midcentury bar with matching stools designed by Maison Jansen and chairs by Pierre Jeanneret. “I come down here a lot on Fridays at the end of the week and have drinks with the staff,” said Browne, emphasizing that the bar is meant to be used and welcome customers. “It’s real,” he said. “It’s not just store fixtures.”

The dedicated women’s space reflects the importance of the women’s collection to Browne’s business since introducing it in 2013. The women’s collection is available in all Thom Browne stores — Hong Kong, Tokyo and Milan, with London opening next month — but New York is the first stand-alone unit. The New York store carries the full range of the women’s collection, including ready-to-wear and accessories. Browne said the strategy is to have very carefully edited buys for the brick-and-mortar stores with the full breadth of the collection available online, which is operated through a partnership with Farfetch, which sales associates will be able to access for customers in-store. “The commercial collections have become so important and so big,” said Browne. “But I always got frustrated because things would get canceled at the end of the selling season — stores inevitably only buy into certain things. This way, less things get canceled and we have more control.”